Tell me this happens to all of you, too: you’re in the shower, or preparing dinner, or busy at work, and in your head you compose a post. It’s a great post! Chock full of wit and intrigue! But then, when the time comes to sit down and write it out, the words are just…gone. This has been happening to me a lot lately.

I thought for sure I’d have time to do a Thanksgiving post, especially since this year I am the most thankful person that ever did thank. Also, I worked from home during the snowstorm on Wednesday, and had off Friday. And yet somehow the weekend slipped away from me. Ah, well.

I’ve been thinking a lot about being thankful. I’m still doing a lot of that. I don’t know if any of you follow Scary Mommy, but lately the majority of those posts have been sort of annoying me. It seems like every other post (with a few notable exceptions) is about a mom just counting down the minutes until bedtime, or hiding in the bathroom from her kids, or chugging wine and trying to get out of story time. And yes, I understand that parenting is hard…especially when you have multiple children…and complaining is natural, and normal. And maybe I don’t have the right to say this yet because I’ve only been a parent for a few short months and I only have one child. But where are all the posts filled with joy and gratitude? Where are all the moms rushing home without stopping to pick up creamer first, because one quick trip to the grocery store on a weeknight means 15 minutes fewer with her sweet baby? I know those moms are out there, too. I happen to be one of them. 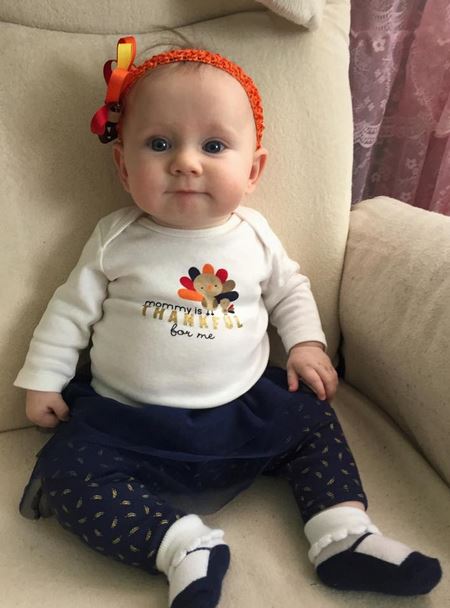 Some things in life, even things that I really, really look forward to, are not as good as I imagined. Being a mom? Better. So, so much better. I am grateful in every waking moment. When it’s 5 am and I’m frickin’ exhausted and she won’t stop kicking my boob and babbling at me…when she cries and fusses for absolutely no reason at all…when she (willfully?) grabs my hair and yanks..I smile, and I’m thankful. I’m not doing it for show, or because I don’t feel like I have a right to complain. I am genuinely, truly filled to bursting with appreciation and awe every day of my life. It’s a very strange thing to try to explain. And for someone who has been spoiled and perhaps a bit overindulged (relatively speaking) for most of her life, it’s a wee bit of an adjustment.

Thanksgiving was awesome. Molly had her first taste of food (organic sweet potatoes), and she did very well with them. We’ve tried to give them to her a couple more times but she has a “take it or leave it” kind of attitude about the whole thing. When we’re eating, she looks fascinated, but once we give her a turn she doesn’t seem to care anymore. I’m curious to see what happens when we try something different.

We did Christmas photos on Sunday and I’m dyinnnnnnng to see the proofs (and order cards). I had a little bit of a “new mom fail” at the photo shoot because I only brought a formal outfit, whereas my mom and sister brought PJs for the other kids to change into and those pictures are going to be so adorable. I wish someone had communicated to me that kids require multiple costume changes. How was I supposed to know?!

The new job? Ahhhhh, heaven! I’m already busy with work and my days fly by. The benefits there are incredible – not just infertility coverage, but even their maternity leave is DAMN GOOD. (Unsure if I’m allowed to disclose specifics, so I won’t, but I will say I’m thrilled). They actually have dedicated lactation rooms. With leather couches and high-tech massage chairs. For realz.

I have a billion more things to say but clearly I can’t remember any of them AND I need to go do some more (online) Christmas shopping. I started out saying that I was only going to get Molly one or two things since she’s clueless this year anyway, but so far I’ve already blown that limit out of the water and Eric’s been shopping for her, too. We just can’t help it. We’re too damn excited. And grateful. Incredibly, ridiculously grateful. 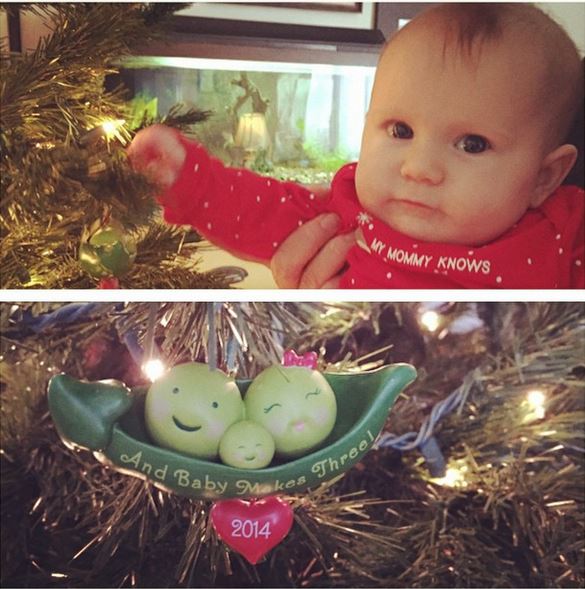 Sorry to leave you all in suspense for the beta. The sad fact of the matter is, despite running the test yesterday, I didn’t get the results until this evening. It’s kind of a long story.

I went yesterday morning for the beta at a lab in my area, an option that was offered last time but that I didn’t pursue because 1) New Hope insisted on same-day results, and my normal lab doesn’t do those and 2) I was just used to going to New Hope. But last time, after getting super pissed at the 4-hour round-trip bus ride for a 30 second blood draw, I decided to do something different. I’m sure I’ll have to go back to NYC if I make it to the ultrasound stage, but in these first weeks when they’re just drawing blood, it’s 100% ridiculous to go all the way to New York. I found a lab very close to work that does same-day results, and it’s so much more convenient.

The one downfall of outside lab monitoring: waiting. As much as I claimed to be calm, by 3 p.m. yesterday I was starting to feel a little anxious. For my first beta, I’m pretty sure they called around noontime. Yesterday I kept getting up from my desk and forgetting to take my phone with me, then running back expecting to see a missed call and not being able to reach someone. Were they not calling me because it was bad news? I know they don’t do that, but still… my mind was going nuts.

Of course I didn’t decide to reach out and call them until 4:50 yesterday, and of course they didn’t answer the phone. I had to go through last night not really knowing what the answer was, and on top of that I got a pregnancy announcement from someone pretty close to my inner circle of family/friends (can’t spill who, not sure if she’s “out” yet). I was happy and excited and frankly unsurprised since I knew she wanted another child, but you know… pregnancy announcements bring up such mixed emotions, even though I kept trying to inwardly calm myself with “It’s OK! You’re pregnant too! I mean, probably. Hopefully. Maybe.” It just would have been so much easier to take it all in if I had my solid beta number in my pocket.

This morning I called New Hope first thing, and they claimed to not have received the results, which is why they didn’t call. They gave me a number to fax the results to that was completely different from the one on the paper, so I’m thinking the lab just faxed it to the wrong place. I called the lab, and they agreed to fax it to the new number. Phew. The woman on the phone was literally looking at my results so of course I had to ask, “You can’t tell me what they are, can you? Wink, wink?” She could not. It was just so frustrating knowing that she saw my fate, but I had to wait to hear it. Damn privacy laws. You’re protecting confidential information about me from me. Doesn’t make much sense.

I called New Hope in a couple of hours and they confirmed that the fax came through. Again, the receptionist couldn’t tell me what the results said, and just promised that someone would call me back once the doctor looked them over. I waited. I waited. My phone was permanently attached to my hand, even in the bathroom. We threw a baby shower for a girl at work today, so I sat through the entire thing willing the phone to just freaking ring – yes, another baby-centric event I had to endure with no damn beta.

They never called. I finally emailed and got back a response in about 5 minutes (who would have thought that could work?). And the answer is… Yes, pregnant. Beta is 32.

Last round my beta at 7dpt was 155. This time, it’s 32. Since my response came in the form of an email and not a phone call, I couldn’t express my skepticism at this number or badger anyone to make sure it’s acceptable. I’m currently badgering a friend from the IF world via text, which I’m sure she appreciates.

So Anxiety is back, full force. Worry is back. Calm packed his bags and left. Why do I have to know any of this shit? Why do I have to obsess over betas and doubling? Why can’t I just pee on a stick and assume that in 9 months I’ll just have a baby? Faaaaccckkkkkkkk it.