Beta number 2 was not only good news, but the news came in a timely manner. What a pleasant surprise.

Today’s beta was 80, which is the number I had in my head and is perfect doubling time. So…I’m really pregnant! And these low betas are making me think it’s a singleton, so I’m SO happy they transferred two (because if they had just picked one, what if it was the non-planning-on-sticking one?). I mean, technically it could still be two. But with these super low betas and non-crazy doubling time, my money’s on one. And that falls in line with what the psychic said anyway.

I just wanted to clear something up from the other day, when I was acting all cool and non-excited over my positive pee stick. This low beta experience has shown that I’m still a veritable ball of anxiety, and that nothing is for certain. I was grateful the whole time, of course, but I think I was getting a little bit too assured that I could at least make it to 8 weeks, just because I had done it before. These past few days prove that there’s always something to worry about. Always.

Thanks for all your kind words and quick research skills yesterday. I feel soooo much better today. My next beta isn’t until next Saturday, and I just need a break from thinking about it for a minute, so that’s good. I’m actually leaving for the beach tomorrow night and staying until Thursday (impromptu last minute vacation with Eric’s family) and I hear there’s no internet where we’re staying, so if I go MIA next week, that’s why. I’ll see y’all when I’m less pasty white!

Sorry to leave you all in suspense for the beta. The sad fact of the matter is, despite running the test yesterday, I didn’t get the results until this evening. It’s kind of a long story.

I went yesterday morning for the beta at a lab in my area, an option that was offered last time but that I didn’t pursue because 1) New Hope insisted on same-day results, and my normal lab doesn’t do those and 2) I was just used to going to New Hope. But last time, after getting super pissed at the 4-hour round-trip bus ride for a 30 second blood draw, I decided to do something different. I’m sure I’ll have to go back to NYC if I make it to the ultrasound stage, but in these first weeks when they’re just drawing blood, it’s 100% ridiculous to go all the way to New York. I found a lab very close to work that does same-day results, and it’s so much more convenient.

The one downfall of outside lab monitoring: waiting. As much as I claimed to be calm, by 3 p.m. yesterday I was starting to feel a little anxious. For my first beta, I’m pretty sure they called around noontime. Yesterday I kept getting up from my desk and forgetting to take my phone with me, then running back expecting to see a missed call and not being able to reach someone. Were they not calling me because it was bad news? I know they don’t do that, but still… my mind was going nuts.

Of course I didn’t decide to reach out and call them until 4:50 yesterday, and of course they didn’t answer the phone. I had to go through last night not really knowing what the answer was, and on top of that I got a pregnancy announcement from someone pretty close to my inner circle of family/friends (can’t spill who, not sure if she’s “out” yet). I was happy and excited and frankly unsurprised since I knew she wanted another child, but you know… pregnancy announcements bring up such mixed emotions, even though I kept trying to inwardly calm myself with “It’s OK! You’re pregnant too! I mean, probably. Hopefully. Maybe.” It just would have been so much easier to take it all in if I had my solid beta number in my pocket.

This morning I called New Hope first thing, and they claimed to not have received the results, which is why they didn’t call. They gave me a number to fax the results to that was completely different from the one on the paper, so I’m thinking the lab just faxed it to the wrong place. I called the lab, and they agreed to fax it to the new number. Phew. The woman on the phone was literally looking at my results so of course I had to ask, “You can’t tell me what they are, can you? Wink, wink?” She could not. It was just so frustrating knowing that she saw my fate, but I had to wait to hear it. Damn privacy laws. You’re protecting confidential information about me from me. Doesn’t make much sense.

I called New Hope in a couple of hours and they confirmed that the fax came through. Again, the receptionist couldn’t tell me what the results said, and just promised that someone would call me back once the doctor looked them over. I waited. I waited. My phone was permanently attached to my hand, even in the bathroom. We threw a baby shower for a girl at work today, so I sat through the entire thing willing the phone to just freaking ring – yes, another baby-centric event I had to endure with no damn beta.

They never called. I finally emailed and got back a response in about 5 minutes (who would have thought that could work?). And the answer is… Yes, pregnant. Beta is 32.

Last round my beta at 7dpt was 155. This time, it’s 32. Since my response came in the form of an email and not a phone call, I couldn’t express my skepticism at this number or badger anyone to make sure it’s acceptable. I’m currently badgering a friend from the IF world via text, which I’m sure she appreciates.

So Anxiety is back, full force. Worry is back. Calm packed his bags and left. Why do I have to know any of this shit? Why do I have to obsess over betas and doubling? Why can’t I just pee on a stick and assume that in 9 months I’ll just have a baby? Faaaaccckkkkkkkk it. 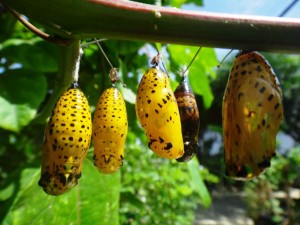