It’s official – I have food aversions and serious cravings. 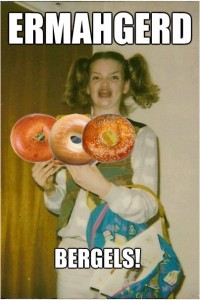 Yesterday at work someone was toasting a bagel in the break room. Guys… I’ve never done hard drugs but I can only imagine that I felt like a heroin fiend jonesing for a fix. I have never wanted anything so badly in my life as I wanted that bagel. I came so close to asking this guy if I could have it (awkward much?) Bagels. I thought about them for the rest of the day. I had already eaten breakfast and wasn’t the least bit hungry, but I physically needed a bagel.

When some of the girls went out for lunch I had them stop and pick me up a bagel. And yes… eating it was a soul altering experience. It was the most delicious thing I have ever eaten in my life (that’s no exaggeration).

So of course this morning I stopped and got half a dozen bagels to tide me over for the week (day?) These past few days I’ve been craving bread/carbs/pasta in a serious way. Things that make me wanna puke? Eggs. The thought of an omelette turns my stomach. This really pisses me off because I love eggs and omelettes. I raise chickens, for heaven’s sake.

I don’t know where all of you live and shop, but I can say with certainty that if you don’t live near a Wegmans…I’m sorry. There’s just something about that place that makes me happy the moment I set foot in the door. Are some things more expensive there? Yes. Is the pleasant shopping environment worth it? Oh, hell yes. And Wegmans at 8:30 on a weekday morning is downright inviting. There’s hardly anyone there, it smells amazing, you can pick up a fresh cup of coffee (salted caramel flavored – YUM), a half dozen freshly baked bagels and the creamer that your husband goes through like it’s going out of style. It’s all employees buying each other coffee, chatting and warmly greeting you. It’s just so… familiar. Pleasant. Lovely. Hey, I love Bottom Dollar for a bargain, but when it comes to enjoyable shopping experiences there’s really no place like Wegmans.

Sorry that this post is all over the place. I go from bagel love to grocery store love in one sentence flat. Now on to the next topic – this blog.

A lot of infertility bloggers have voiced concerns over transitioning to a week-by-week pregnancy blog/eventual parenting blog or whether they should just start a new blog altogether. Just to clarify my position – BBToast is and always will be a blog about my life. It started out focusing on all of our animals before taking a wild turn to IVF and eventually landing here at the terrifying world of early pregnancy. I will continue to use it as a platform to document what’s going on in my life – be it pregnancy, parenting or going off the wall crazy. I am sorry to lose any readers who might not feel emotionally able to follow along (though I do not blame you AT ALL), but I wanted to at least give an overview for the future. This blog will change along with my life and circumstances, and for the foreseeable future I promise to keep updating as much as possible. I would also never abandon it completely without a proper goodbye.

You guys aren’t getting rid of me that easily.

I kind of gave up on the signs and symptoms list (though maybe I will post it eventually) because I realized that it didn’t say much at all. The truth is that it’s just way too damn early for any “signs.” Every month that I got my hopes up for twinges, sore boobs and excessive bathroom trips was just a fluke. Really I should have been more excited to feel absolutely nothing at all, since apparently that’s what pregnant feels like.

The number one thing I feel is… ready for it?… rage. Yes, I am angry about everything. Eric and I keep getting into fights and I call him mean, but then he says, “What are you talking about? You’re the one being mean.” I guess I do notice it. I’m not a total bitch normally, but I’m also not the nicest, sweetest person you’ll ever meet. I’m a bit snarky and sarcastic and I don’t easily forgive faults. Some might even call me judgmental. These things are just part of my nature.

But now…now I’m just so angry about everything. Then I get angry at myself for being so angry. Minor irritations put me over the edge. My dogs have been driving me absolutely nuts. I can’t even explain how frustrating it is to be pissed off for no good reason. It’s actually pissing me off trying to figure out how to explain it.

I really thought I would feel different. I know I’ve probably mentioned this before. I thought I would go about my day and just feel a sense of elation to exist, knowing that I was growing a baby inside of me. You know what? I feel exactly the same as before. I have to keep reminding myself that this is really happening.

As for cravings – obviously it’s way too early for those, but over the past few days I’ve felt a sense of wanting something (and it feels like I want a food or beverage) but I don’t know what it is. I want it very much, but I cannot for the life of me figure out what I want. Are you starting to see where some of this anger is coming from?

I’m also a little worried about work. I work for a dot com and the big joke is that “we’re
shutting down tomorrow,” but lately that’s starting to look more and more likely. There have been a few shake-ups that make me nervous, especially if this pregnancy really happens. I know people aren’t technically supposed to discriminate, but come on. I really doubt a waddling 6 months pregnant woman is going to get hired anywhere.

Ok done bitching and moaning for today. If anyone could clue me in to what I’m craving, that would be greeaaat.