My aunt yelled at me because I didn’t mention my five year anniversary in my last post. Oops! All in all it was a good day – we both stayed home from work and hosted a yard sale at our house, and actually sold a whole bunch of crap. It was so successful that we plan on having another in July (another yard sale – not another anniversary). Then that night we went to Wendy’s for dinner – not just the drive-thru, mind you, but dined in the restaurant as a family. Yes, so romantic. I don’t ever let Molly (or myself, for that matter) have fast food, so as you can imagine she was in chicken nugget heaven on this rare occasion. We only went because we were on our way to an indoor football game, which is how we closed out the evening. I was really expecting a lavish vacation or a romantic stay at a B&B for 5 years – but hey, a yard sale, Wendy’s dinner date, and football game turned out to be not bad at all.

Other than that, things are just kind of chugging along. I’m still pregnant. Still feeling little flickers of movement and still getting a little rounder each day. A friend of mine posted that her timeshare was available in October and asked if anyone was interested. As I’m sitting there googling flight prices and trying to think how I’m going to convince Eric to go, I had a sudden realization – October. Third trimester. Hello, I’m not going to be allowed on a plane! I literally forgot I was pregnant for a second. That’s something that never, ever happened with Molly.

In one week, my baby girl turns one! Ahhhh!!! One year ago today – 2 days shy of my due date – I was enormously fat and pregnant and hot and miserable. Today I am still kind of fat and definitely pregnant but not miserable. And sometimes I don’t even know I’m pregnant. It’s amazing the difference a year can make.

I just submitted a post to Scary Mommy (even though I have a love/hate relationship with the site in general, I figured it would be fun to be published there. They have over a million readers…and they pay $100 per post). I really hope it’s accepted. It’s all about my guilt over not finishing Molly’s baby book. I know, so ridiculous, right? I’m a writer and I can’t even do it. And she’s my first child! What the heck is wrong with me? 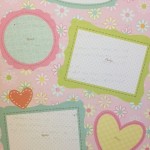 oh, hang on, I know I have a heart-shaped photo around here somewhere…

I am really going to try to work on it this weekend because my plan was to have it displayed at her birthday party. The most annoying thing – besides finding photos to fit in the weirdly shaped spaces allotted – is trying to remember when things started happening. Molly says Mama/Mommy and Dada/Daddy, but most of all she says, “I DID IT!” She says that all the time. And that’s why baby books exist, right? Because as much as this is part of her identity now, in 5 years I probably won’t remember that every other second she was exclaiming “I DID IT!” and “I DID THAT!” or intentionally dropping toys and saying, “UT!” (no uh-oh. Just ut!).

But when I go back and read old posts, it’s clear how much she has changed already. Like how there was once a time where I fretted over self-feeding and how she didn’t really have the hang of it. HA!! Now the girl could demolish a Porterhouse steak, and I probably wouldn’t even need to cut it. No teeth and all. She is the queen of self-feeding.

So yeah, baby book. I think I’m going to go through all my old photos/videos on my phone to determine when things took place since they are conveniently sorted by date (thanks, iPhone). I do have months 1-5 filled in at least. The photos are going to be the real challenge since the spaces provided are so specific and strange. I want to order a whole bunch to display at her party but I’m waiting to see if the photographer gets her one year photo session proofs done before I do that.

And for this next kid I’m not even attempting the guilt-inducing baby book. I recently discovered (too late for Molly but not too late for lil’ crouton) that there are apps where you input photos and milestones, then order a pre-made book once your baby hits a year. Genius, right? And so much easier than putting pen to paper. I’m definitely going that route for this and subsequent children. If I remember. Eeesh.