I know, right? THAT’S INSANE. Wasn’t it just yesterday that I was crying nightly into my pillow, wondering if I’d ever get to be a parent? That seems so long ago and so recent. I remember what it felt like and I forget. In general, I’m way too busy to think much about it at all, except in quiet moments like this one when I can marvel over how much can change in two short years.

Speaking of change… we aren’t moving to Seattle. At least, there’s a 99% chance we aren’t. Even as I wrote that last post I knew that ultimately, our village is way more important than money. But that doesn’t mean that things are staying the same. In fact, big changes are on the horizon, but that’s another post for another time. Stay tuned… ;)

I took the day off last Thursday to spend the day with Molly for her birth anniversary. My original plan was to take her to a local amusement park, especially considering how much she enjoyed the dinky carnival rides earlier this month. Unfortunately, I couldn’t find anyone to come with us, and then when the day was humid and looked like rain, I ditched the whole expensive proposition entirely. Instead, I let her have chocolate chip cookies for breakfast (along with scrambled eggs, I’m not totally insane), then dropped Liam off with my sister so she and I could have some “quality girl bonding time.” And by bonding time, I mean she came along with me to run errands that I’d been putting off for weeks. Oops.

But we had fun. Eric ended up taking a half day, so he met us at Chik-fil-a for lunch (this is a big deal, she almost never has fast food and has literally never played in a fast food restaurant play place). We also got some froyo for dessert and then headed to my in-laws for dinner, swimming, and cupcakes. It was a pretty great day overall.

Friday we went into hardcore party prep mode. I work from home Fridays in the summer, and my workday ends at 2pm. Pretty much everything from 2pm Friday to 2pm Sunday was a total whirlwind of activity getting ready for Molly and Addison’s joint birthday party. There was yardwork, intense cleaning, 11pm grocery shopping, trips to Party City, cooking, setting up, hanging banners, and a million other things I can’t even remember. Thank God I had my sister as co-host, otherwise I never would have gotten it all done. I was literally over at my parent’s house picking up chairs to borrow an hour before the party started (and I hadn’t even showered yet).

The party was huge, and I’d say successful, though the stress of throwing it together almost made it not worth it. I can’t tell you how many times my sister and I turned to each other and said, “Why are we doing this again?” When I say I love to entertain, I don’t think I actually mean it. I would love to entertain if I had cleaning people and landscapers and caterers. And Valium. I have none of those things.

We ended up having 50 adults and 26 children attend. Crazy! I had actually wanted to invite more people (if you’re reading this and weren’t invited, you’re probably one of them), but I had to draw the line somewhere… my yard isn’t that big! The best investment we made by far was the giant bounce house/slide combo rental, which was a little pricey but 100% worth it. It kept the kiddos occupied the entire time.

And unlike last year, the weather was awesome. It was a little humid at the start of the party, but I have a lot of shade in my backyard, which made it totally bearable. By early evening the temperature was just perfect. Remember, the whole reason I even bothered throwing a second birthday party was because the weather at her first birthday sucked so much. We needed a do-over. 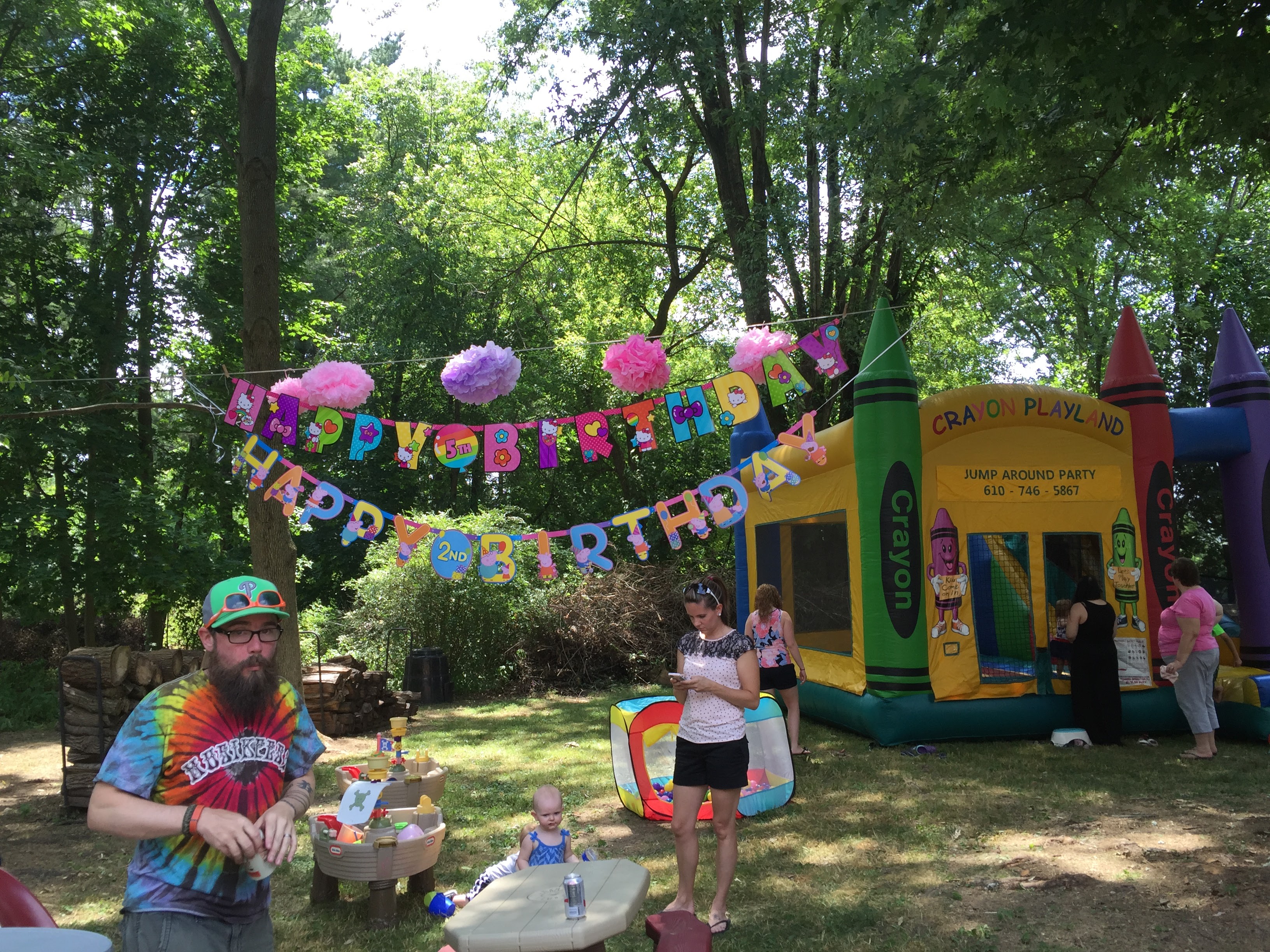 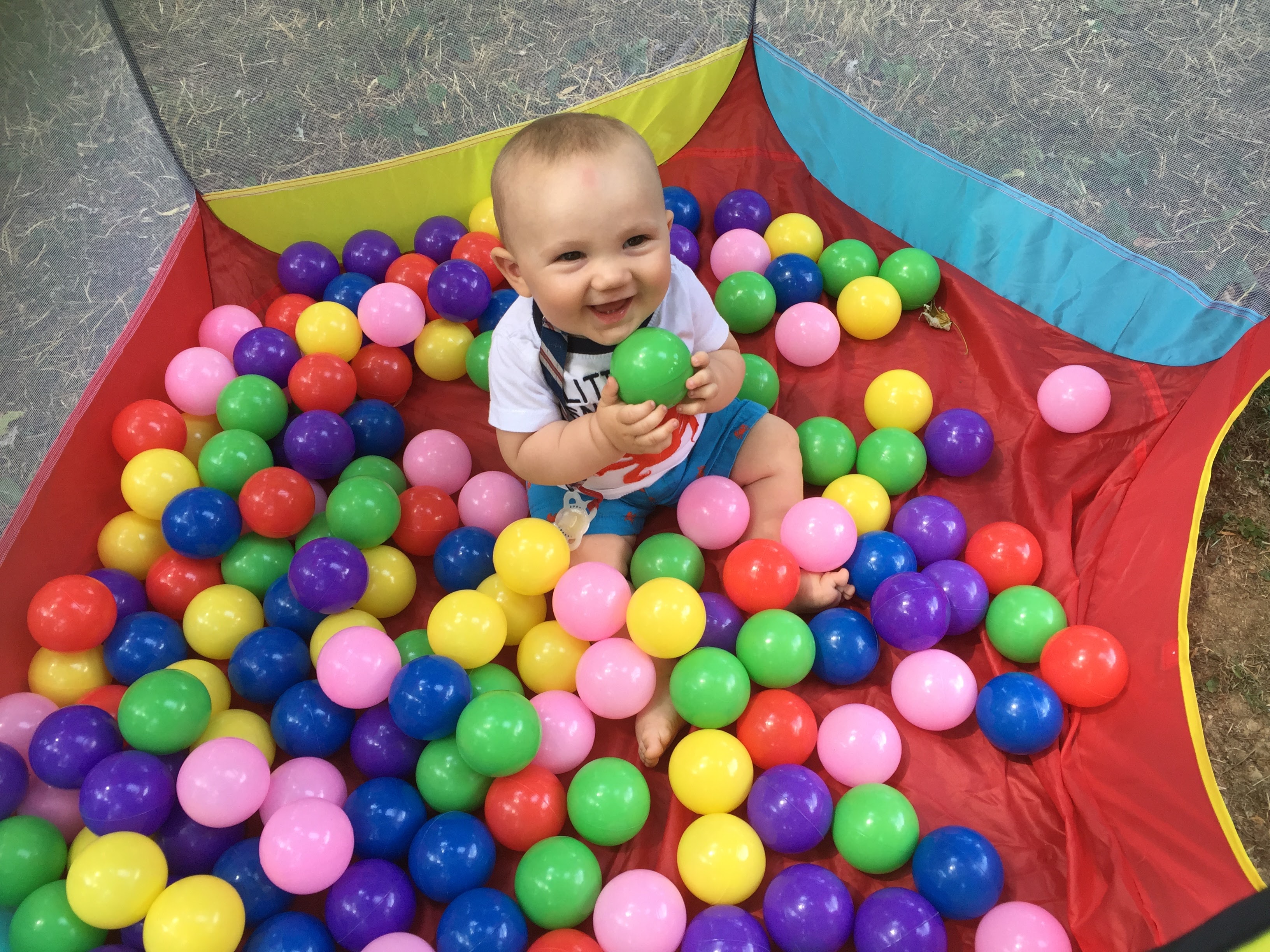 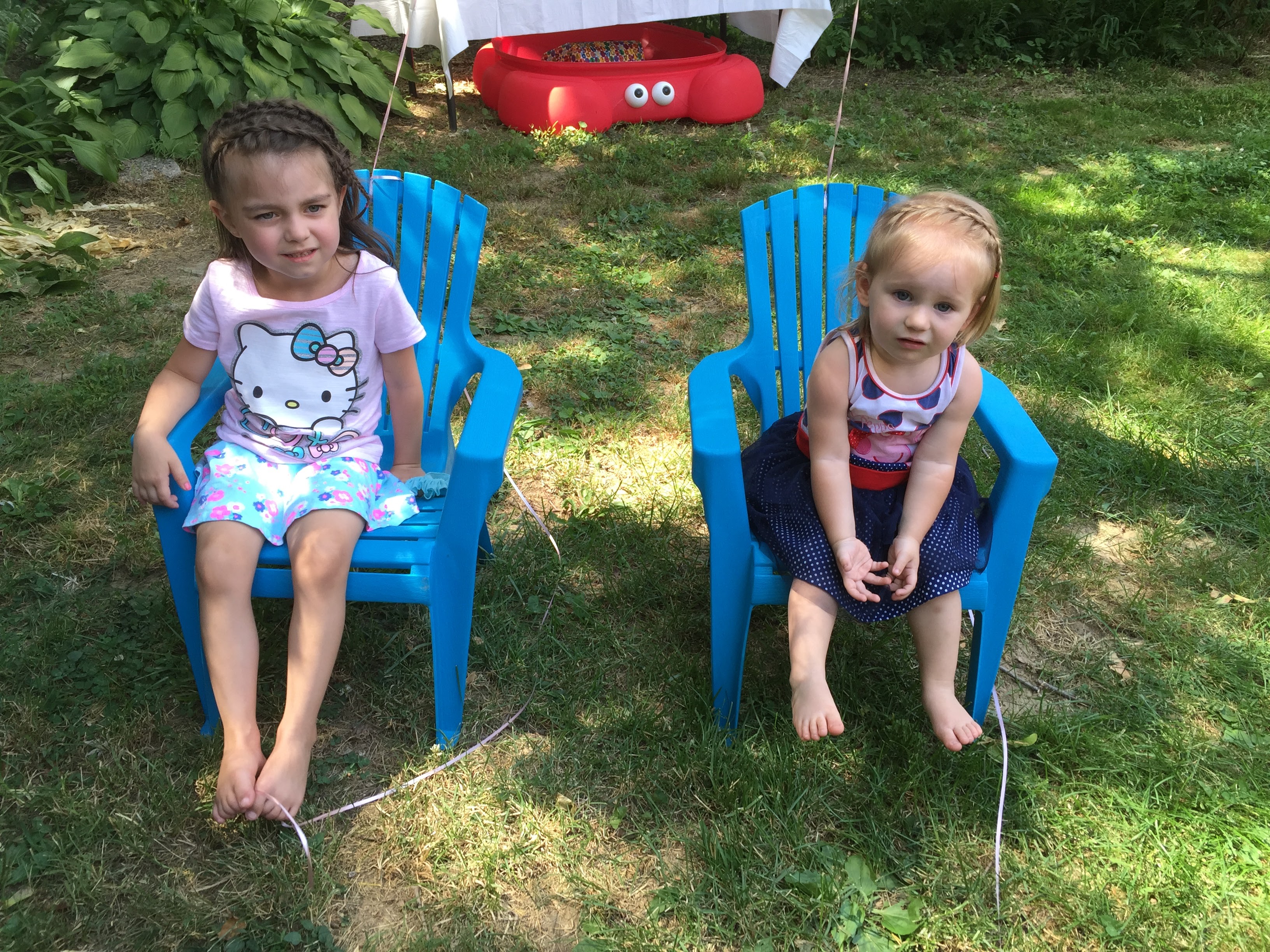 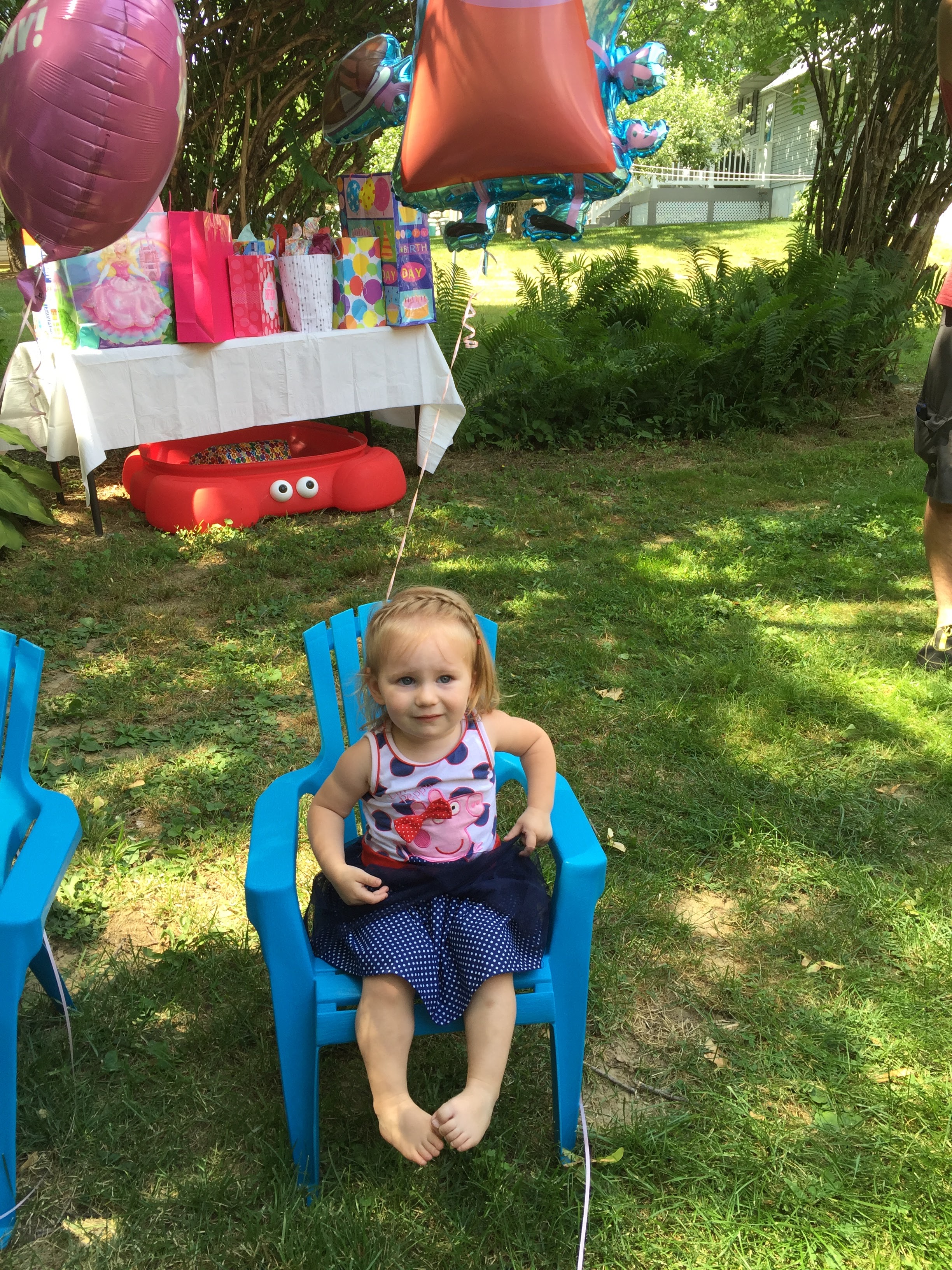 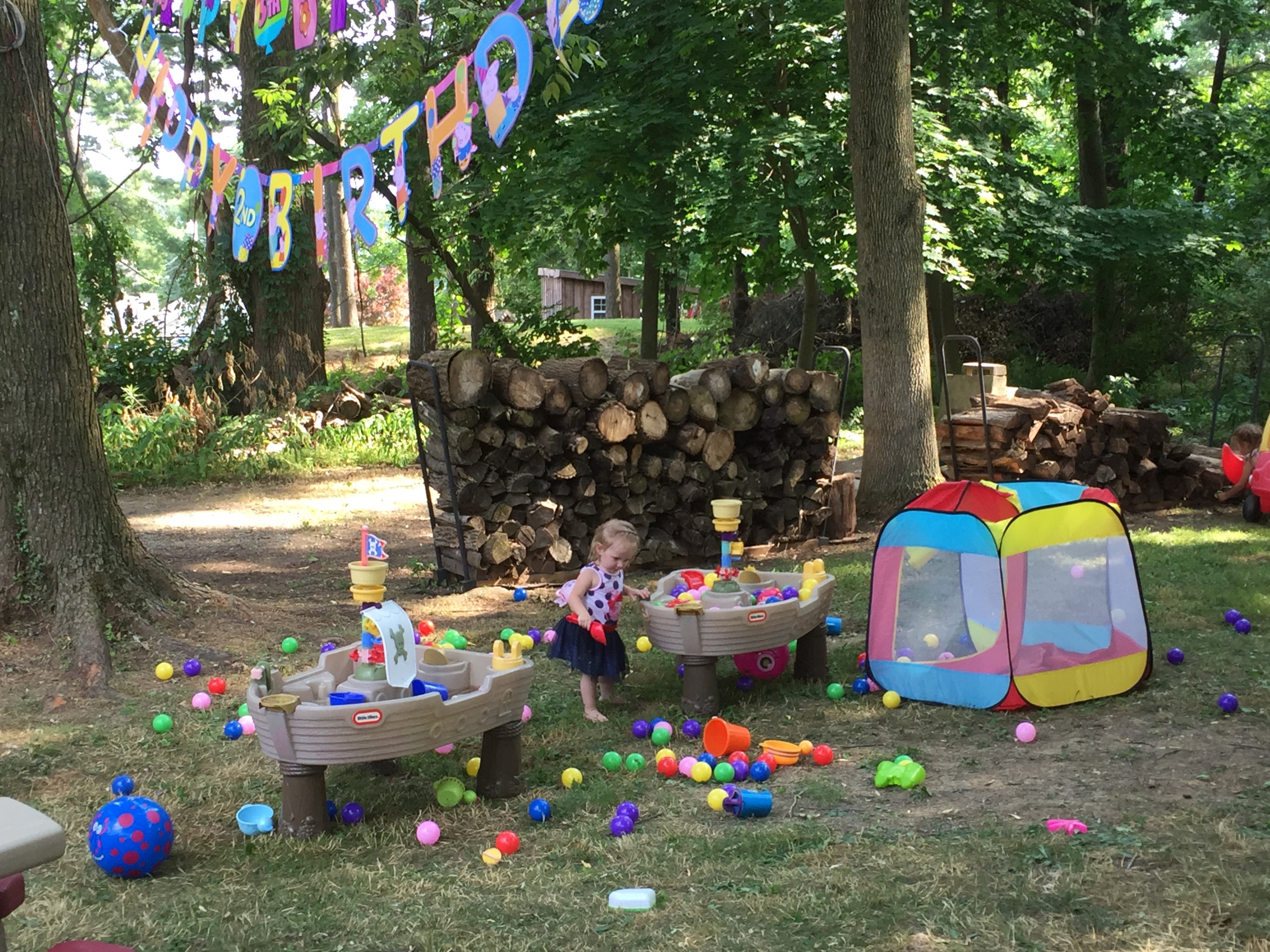 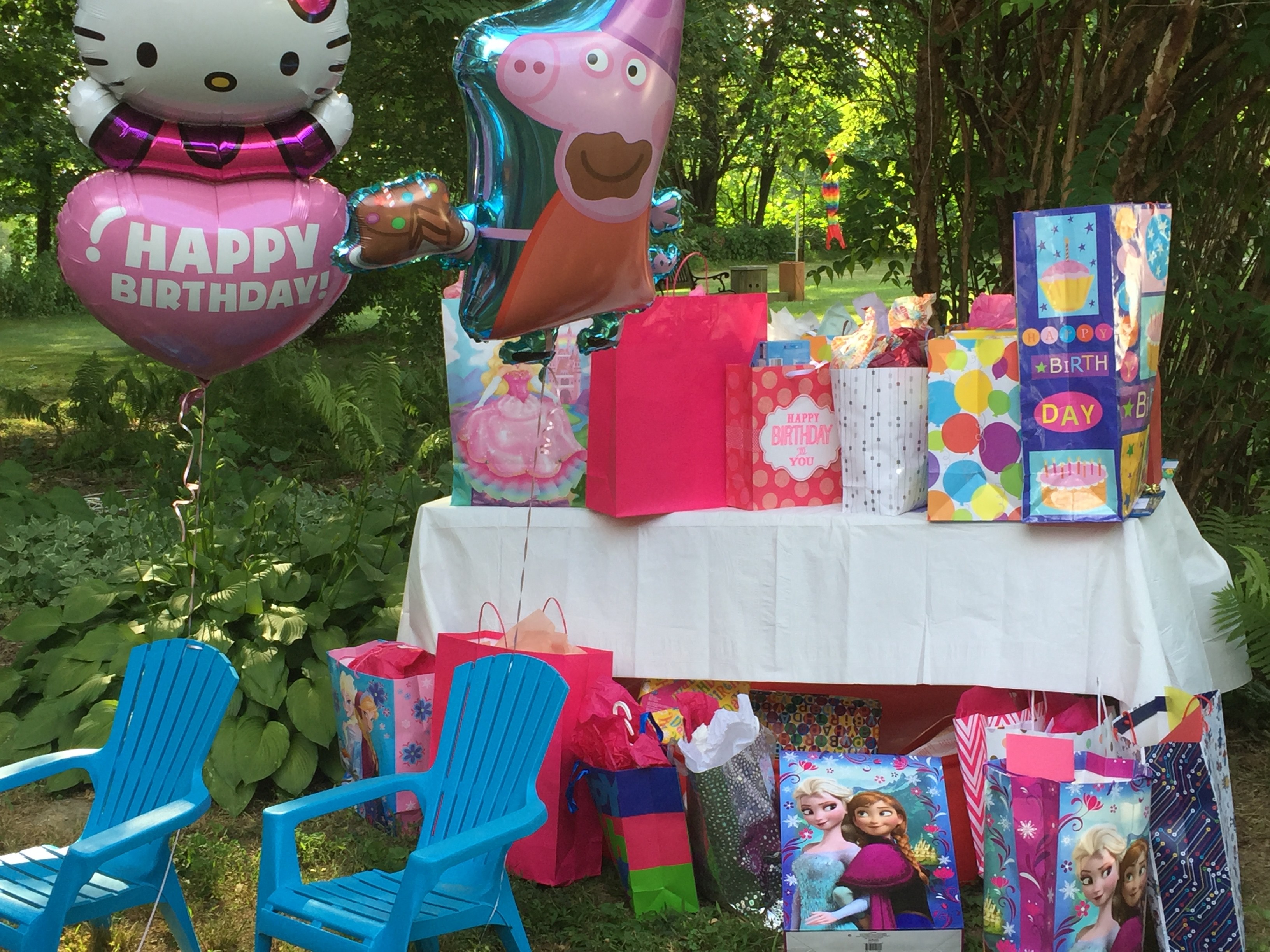 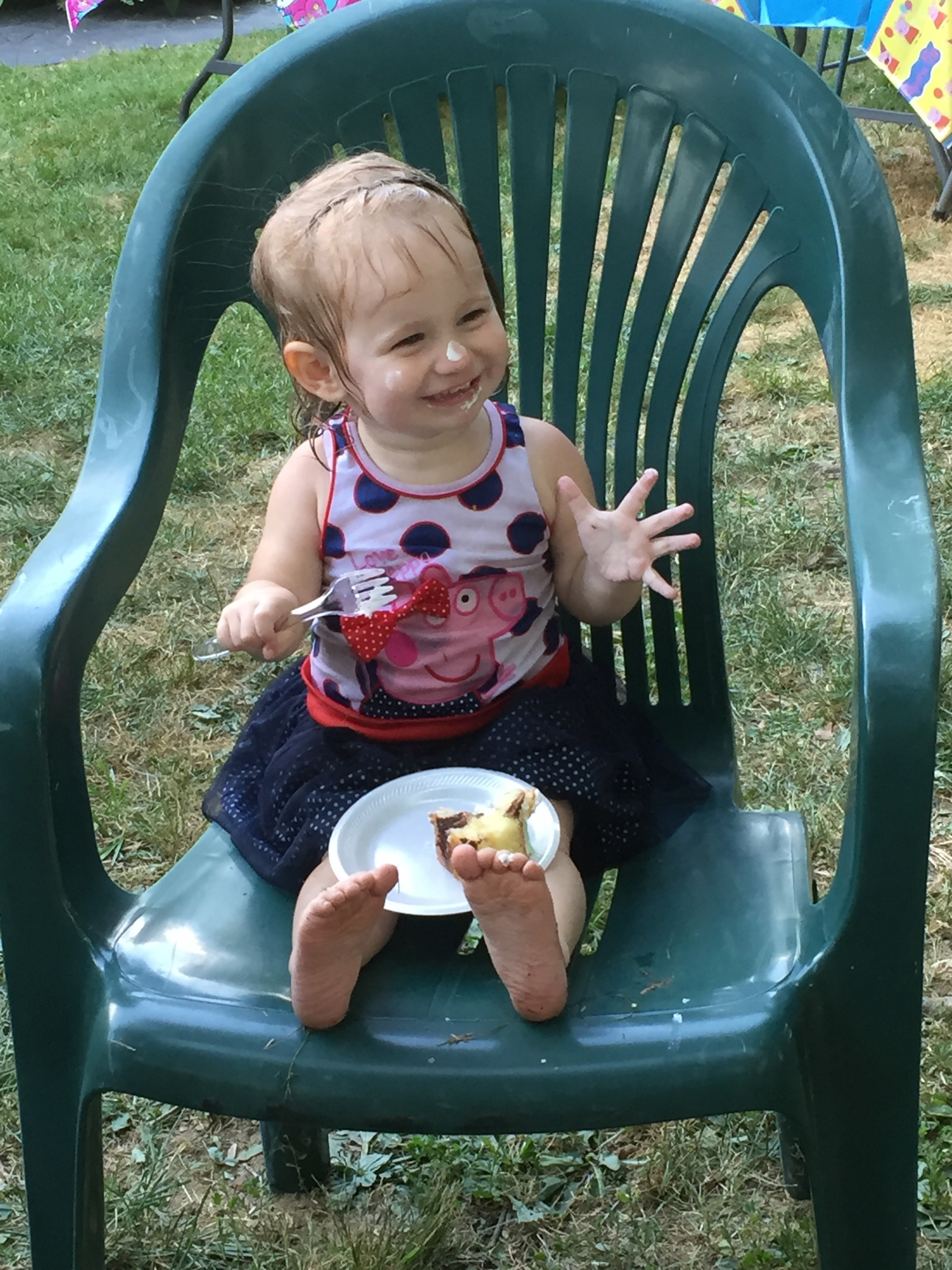 The cutest thing happened later, when we were opening all the gifts. I have to marvel at my girl’s patience… she saw the gift pile, and knew they were all for her, but patiently waited for me to clean everything up before diving in. She asked twice, “Presents now, Mommy?” Finally, when the last dish was washed and the last chair was folded and put away, we let her open them. I have no idea where she got this, but with every gift, she would look into the gift bag and exclaim, “Oh da goodness! Oh da goodness!” before she even saw what was in it. And yes, I got it on video. It’s just tooooo cuuuuuute.

As fun as it was, I’m so, so, so happy it’s all over. This weekend we are going to parties rather than hosting parties. I’m really looking forward to that.

One thing I didn’t do last week was eat. There was just no time! I’m happy to report that between the running around, the stress, and a little bit of working out I am now within 3 lbs of the weight I was when I got pregnant with Liam. I don’t want to call it my “pre-pregnancy weight,” because it’s still way higher than how much I weighed when I got pregnant with Molly. Remember, I was losing weight but not anywhere near my goal when I unexpectedly got pregnant with the little man. BUT, it’s still 30 lbs down from the day I delivered him, and that feels really good. More stuff in my closet fits me. I’m not completely depressed about going to the beach in a month. I still have a long way to go, but it’s a satisfying milestone.

Liam turned 7 months old on Monday, and at his well baby checkup the next day they confirmed he’s the chunkiest monkey. He weighs 19 lbs 8 ounces, and his 9 month clothing is already getting tight. I cannot tell you how much this kid loves to eat. I thought Molly was a pig… no. He eats, and eats, and eats. He also started blowing raspberries, which is freaking adorable. He’s a sturdy sitter and enjoys putting everything in his mouth (which I know is normal, but also something that Molly didn’t do, so it’s weird for me). He loves his mama A LOT, but he’s also a big fan of Molly, and pulling on Daddy’s beard. His smile is infectious. I just can’t imagine life without him. Any time I leave him at home (intentionally, obviously), and try to go somewhere with just Molly, she’ll stop dead in her tracks on the way to the car and say, “Oh no! Baby!”, like I forgot him or something. And no matter how many times I reassure her that he’s fine, and he’s with Daddy, and we’ll see him soon, she inevitably talks about him the entire time we are gone. To say she’s obsessed with her little brother would be an understatement.

I guess that’s all for now. Hope you all have a relaxing and enjoyable 4th! 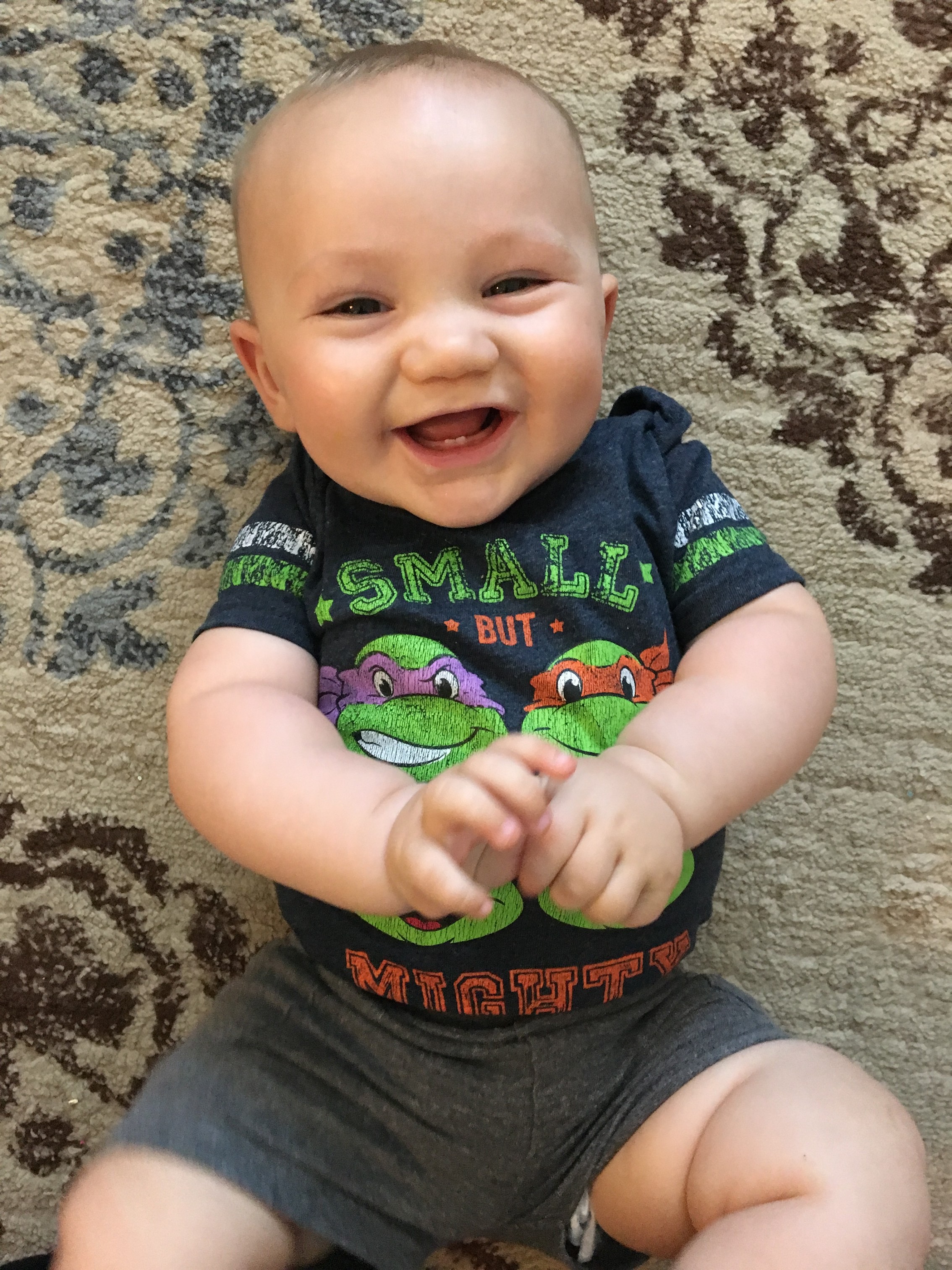