Anyone else feel like the blogosphere becomes a total ghost town on the weekends? Am I the only one having a lazy Saturday morning with copious amounts of time to blog?

I’m pretty sure I’ve expressed my love of anesthesia before. I was driving home from work yesterday and a super popular song came on the radio. The more I listened to the lyrics, the more I started to realize why I’m so obsessed with anesthesia.

The song was “Wake Me Up” by Avicii, and it said:

With anesthesia, you know something awful is right around the corner. The first time I had it, they said, “OK, now we’re going to rip four teeth out of your head.” The second, it was, “OK, now we’re going to enter your vagina and pluck out all your eggs.” Third and final time – “OK, we’re going to remove your dead babies from you.” None of these things are pleasant, right? So I was nervous. But then that magical fluid dripped into my veins and the next thing I remember, someone was telling me, “It’s over. You’re done now. You did great.”

There’s such relief in that! It feels so good to sleep right through the bad stuff. That’s why I’ve decided I need “life anesthesia” for the next couple of months. I don’t want to miss out on pregnancy completely, so I’d be OK with being woken up at the start of the second trimester. That would be acceptable (plus, that’s right around the holidays. I wouldn’t want to miss out on a visit from Santa).

I’m so tired. I’m a huge napper/sleeper to begin with, but the drama of all this has pushed it over the edge. Now I’m fairly certain that I’ve been using sleep as a coping mechanism. Now I really don’t want to wake up…like, ever. But I do want the end result. So if someone could come over and put me under into that gorgeous state of slumber for the next three months…. that would be great. Thanks.

I was an addict and I didn’t even know it. I really don’t understand how 2 cups of coffee every morning makes that much of a difference for the entire day, but according to my head it does.

Everything went fine at my Day 3 baseline test on Sunday except for one (minor according to them) problem. I have two colossal cysts on my ovaries. These buggers are effing huge. The tech assured me that it’s totally normal, caused by the drugs and that they should go away naturally when I ovulate this month. I did not ask the obvious, “But what if they don’t…” because I didn’t want the stress of knowing that could be an issue.

When texting my mom the results, she immediately sent an urgent “STOP DRINKING CAFFEINE RIGHT NOW” message. Apparently she’s had run-ins with caffeine induced cysts and since I share part of her genetic makeup, this could also be a problem for me. I assured her that the cysts are more likely caused by the shitload of drugs I’ve been injecting myself with, but I would give up the caffeine anyway as an added precaution. 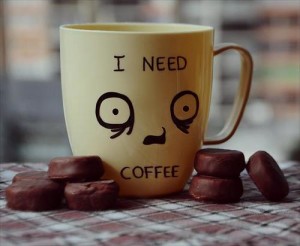 Well. I never thought it would be such hell giving it up. As mentioned above, I’m a two coffee cup a day drinker, both in the morning. Sometimes I have a Diet Coke at lunch, but lately I’ve been cutting back and just sticking to water. I’ll usually indulge in a little bit of chocolate in the afternoon, but I’m talking one little wrapped square of Dove, not 5 Snickers bars. Caffeine did not seem to rule my life.

I started out yesterday with 2 cups of decaf, thinking that would at least satisfy my yen for the taste of it. By 11 a.m., a small but persistent ache started right behind my eyes and mushroomed out to the rest of my brain. At 1 p.m. I was so tired that I put my head down on my desk. I can’t say I’ve ever had to do that before.

Last night the headache continued. I drank some herbal tea and it helped a little, but I’m not ashamed to say I went to bed at 8:45. If we’re being honest, I wanted to go to bed at 7.

It’s a little scary how much I depend on caffeine and that it has that much of an effect on my body’s functioning capacity. Today the headache is still there, but less mind-numbing than yesterday. I could definitely close my eyes and be asleep in under 2 minutes.

So we’ll soldier on. This coincides with Lent starting, so I decided to give up coffee (decaf and regular). Fun times.