I’m the kind of person who hates asking for directions. One time when I had just gotten my license, I decided to load up my brother and sister and spend a summer weekday at the beach. There comes a time on the drive back from the Jersey shore to Pennsylvania that the eight lane highway divides and if you’re stuck in the wrong lane, you’re forced far away from the exit you really want. Thinking that I knew New Jersey decently well (hey, I was born there and much of my family still lives there), I got on the turnpike and decided to keep driving until I recognized something. This was pre-GPS, of course. Six hours later I was pulled over and crying in the parking lot of a sketchy McDonald’s with two terrified minors in my backseat. I felt defeated and childlike when all I wanted was to be an adult for the day. Come to think of it, I’m not sure I how I ever found my way home. All I know is that I should have admitted I needed help long before I reached my breaking point.

Similarly, I’ve been attempting to get through all this infertility and miscarriage drama through sheer power of will. I don’t know, maybe I secretly thought there was a prize for gritting my teeth and soldiering through it. Maybe it’s because when I hear the word “Xanax” I picture an anorexic housewife in a Juicy Couture tracksuit, yelling at her minority nanny to keep the baby quiet while she guzzles wine by the bottle and complains to her equally deplorable friend on the phone about how much STRESS she has. Granted, there are plenty of medicated people in the world who don’t take advantage of the system. I pass no judgement on those folks who need and rely on medication. But as for me, I’ve always felt a sense of pride at checking the N/A box at the doctor’s office when asked what prescriptions I’m currently taking. No surgery, no prescriptions, no chronic conditions. Really the first medically interesting thing that’s happened to me so far has been repeat pregnancy loss. It kind of feels like a blemish on my permanent record. But now I’m finally starting to realize that it just doesn’t matter. There’s no award in life for fewest doctor’s appointments (and if there is, I lost out on it anyway once I started infertility treatments). 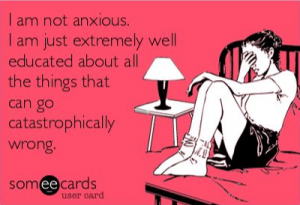 This is all a big preamble to justify the fact that I finally asked for help from the doctor in the form of anti-anxiety meds. I decided I was going to do it after those pain pills made me feel so calm and relaxed, and then I realized it was the right decision when I had a panic attack yesterday over something sort of stressful but not panic attack worthy (details on that to follow in a later post. Ugh, drama). Of course I realize that I can’t stay on them once we start trying again (and they only gave me half a month’s supply anyway). But I’m hoping that in time, I won’t really need them as much. I have the exact opposite of an addictive personality, so I’ve never really worried about becoming dependent on anything. Not that I’ve ever tried it, but I’m convinced I could shoot heroin, shrug my shoulders and say, “Meh, not bad, but I don’t care if I never do it again.” I’m the kind of person that can smoke a cigarette whenever I want and then just not do it anymore, no problem.

It’s funny how weird I get about taking these low dose pills, yet I had no problem injecting myself with hormones and all kinds of crazy stuff a few short months ago. Maybe it’s because the outcome of the infertility drugs was so much more tangible? Maybe it’s because I place more value on physical health than mental health? I don’t mean to do that. The brain is a mighty force and stress is a big freaking deal (though as I’m starting to realize, NOT necessarily the cause of miscarriage). I know that. It’s just that for me, personally, I always felt like my brain was more powerful than my neuroses. I thought that right up until the point that I realized my brain was really causing my neuroses.

My sister suffered from postpartum depression and she’s one of the biggest reasons I felt OK asking for medication. She went on low dose anti-anxiety pills and was off them in a few short months. It was really no big deal, and she always stayed the same person. She never got a Juicy tracksuit and she never mentioned interviewing nannies or buying wine by the jug. She didn’t want to need medication, but then she did need it, and now she’s all better. It doesn’t get more simple than that. I need to adopt a new mantra: there is no shame in asking for help.

So here I am, joining the ranks of medicated Americans. Because at this point I’m willing to try anything, and I’m sick of feeling two steps away from an anxiety attack every waking minute. It’s time to just freaking calm down.