This ride has been quite bumpy. At times I feel like I’m getting my master’s degree in anxiety (and I’m acing all my classes).

My first prescription was a 14 day supply of Lupron with 14 syringes. I was told to get the next medication, Bravelle, by the 14th of January. Despite the fact that I was in Colorado and the shipment was delayed a whole day due to “excessive fog,” it arrived on time. I almost felt smug – but I wasn’t quite in the clear. My next appointment in NYC was on the 15th, after a full day of air travel, going to bed at 3 a.m. and waking up at 6 a.m. To say I was tired would be an understatement. My appointment went fine but by the time I got home, all I wanted to do was sleep. Possibly forever. I woke up from my nap to a voicemail from NHFC. A no-nonsense nurse read off my numbers in quick succession (assuming I would understand their significance?) and gave explicit instructions for dosage on the Bravelle. But then she said, “also continue taking the Lupron, we’ll see you on the 21st for bloodwork, goodbye.” Wait, what? But… I have no needles? What to do? Obviously this was after office hours (it was a nice, long nap) and the Bravelle needles were too huge to use for the Lupron. The units of measure were different. Plus, I suck at math.

I had a mini freak out and became convinced that not doing my shot would ruin everything. But this “keep doing the Lupron” was a complete surprise. I managed to go to sleep, wake up, go to work, play catch up after practically a week off, and send an urgent email and leave an urgent voicemail on the clinical trial mailboxes. No reply. By 1 p.m. I called the main number, practically in hysterics, and said, “I need to speak to a person. Please do not transfer me to an extension and make me leave another message. No one calls me back. I NEED A HUMAN.” The receptionist thankfully obliged and transferred me to a living, breathing nurse. She promised to call in the prescription to my pharmacy immediately.

At 2 p.m. I called the pharmacy. Of course, they had no record of the prescription. I called NHFC back and was promised a returned call from the “prescription specialist” even though that’s not even necessarily who I spoke with in the first place. Another hour went by. I called NHFC again and magically, someone did call in the prescription (though did not call me back as promised). I called the pharmacy to confirm. The pharmacist looked up the prescription, confirmed it was received, and then went on to say, “Looks like we’ll need to order it…” If I could have jumped through the phone, I would have. Not in stock? Regular old syringes, like diabetics use? I made some sort of strangled gasping sound and she quickly asked “Oh, do you need it today?” I said, “YES. I DEFINITELY NEED IT TODAY.” She put me on hold and I lost it. Just cried like I meant it in a dark and empty conference room at work. She was back in under a minute with assurances that I could pick them up that day. Thank GOD.

I find it funny that I ever used to cringe at needles. Not only do I get 2 injections per day at my kitchen table, but I’m now a pro at rolling up my sleeves and giving blood, upper arm rubber band (whatever the hell that thing is called) and all. It wasn’t too long ago that the mere thought of this made me queasy. The tech today asked if I wanted to use my other arm and whether my left arm was sore, and only then did I notice it’s bruised a lovely yellow and purple color. I can’t even feel it.

I hope this doesn’t sound like complaining; I’m only slightly aggravated with how things are going. This clinic is busy with a capital B and that’s not their fault. I insisted on seeing study coordinator Matt today – if nothing else, to prove that he’s still around – and without saying so explicitly, he managed to make me feel paranoid and slightly delusional. Once I am at NHFC, my fears all seem exaggerated. At home, I’m constantly questioning if I’m really doing it right.

We’re on track to do the retrieval this weekend, or thereabouts. My blood results were “good/normal/in range.” Argh, this is getting more detail oriented than I ever intended. Apologies! After next week I plan to stay quiet, or at least about this subject matter, for a while. I hadn’t really planned on what to do once the big day came and went. I guess I’ll just go with the flow. In the meantime, please enjoy this illustration. 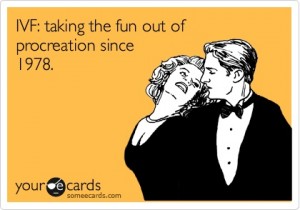