Anyone who has been following along for any length of time knows that Bird is my “problem child.” Lovable, yes, but also naughty. Prone to antics. (Remember this?) (And this?)

Well, this time it may not be his fault, but the incident caused us plenty of headaches nonetheless.

Every year when we go on vacation, we have to board our dogs at the kennel. Up until this year, we’ve taken them to the same place – it’s in town, it’s convenient, and it’s reputable. But part of me never felt good about it, mostly because the dogs are kept in large cages all day and night. Yes, part of the caged area is outside, so they can “enjoy the outdoors.” And yes, my dogs are kept in my bedroom for 8 hours a day during the work week usually, so it’s not really that different. But still. I always felt so bad leaving them there, especially since I was going to enjoy a beach vacation. Ryder would usually come home with some sort of physical proof of his anxiety, like last time when his paw was red and hairless from being chewed on all week.

So you can imagine my delight when a new kennel came to town a few months ago. Not only did they have open play for dogs (and doggy daycare), but boarders enjoyed luxury dog accommodations. They got their own little rooms with beds and windows (no cages). So all week while I was at the beach, my dogs would socialize with the other dogs, play on the outdoor kiddie toys, bathe in the multiple pools, and then go to sleep tired out and happy in their own private room. It was perfect! And I even managed to convince myself that it wasn’t THAT much more expensive than the other place (ahem… $200 more expensive. Eeesh).

I took the boys for a personality evaluation a week before we left to ensure they would get along with the other dogs, and of course they passed with flying colors. I left them there for a day of daycare, just to test the waters, and the owners raved over their awesome personalities and said they were welcome to come and play anytime. We left for the beach feeling really good about the whole situation. And zero guilt!

That is… until Wednesday. Early in the morning Eric got a phone call from the Pennsylvania Department of Health. They were calling to inform him that there was a complaint filed against Bird for biting someone. Eric assured the woman that there must be some mistake, as his dog was safely ensconced at a kennel and we were on vacation. And we had received no phone calls from the kennel.

Apparently it went down like this: one of the employees at the kennel left a bagel unattended (um, why was she eating a bagel around the dogs in the first place?). Bird and another dog, Fred, stole the bagel and started eating it. The employee removed Fred from the area, then attempted to take the bagel out of Bird’s mouth. So…he bit her.

Apparently he bit off the tip of her finger and she had to go to the hospital and get stitches. She wasn’t mad or anything, but since it was a dog bite it did need to get reported to the state. Luckily, the whole place is equipped with web cams (which we were able to view remotely, another huge selling point on this place), so the owners were able to view the incident and confirm that the employee handled it 100% incorrectly. The bite was reactive, not aggressive. They were totally on our side. But despite this, Bird had to be quarantined for the remainder of his stay, and he is never allowed back there for boarding or daycare.

Also, when we asked why the hell they didn’t call us, they said, “It is what it is. We didn’t want to ruin your vacation.”

Um…OK? Really? Because it wasn’t much better hearing it from the Board of Health, that’s for sure.

The whole thing just sucks big time. Because now, not only can we never go back to that place, but also Bird will have this mark on his permanent record forever. So we can never board him anywhere. Trust me, one of the first questions on any application for a kennel or doggy daycare is, “Has your dog ever bitten anyone?” and now we will always have to answer “Yes.” What are we supposed to do next year on vacation?

Because of the incident, the girl who got bit was fired. Not that I’m ever happy to hear about someone getting fired… but it sounds like she’d be better suited to a different profession anyway. Too late for us, though.

I don’t know what I’m going to do with this dog. But then something like this happens, and all is forgiven: 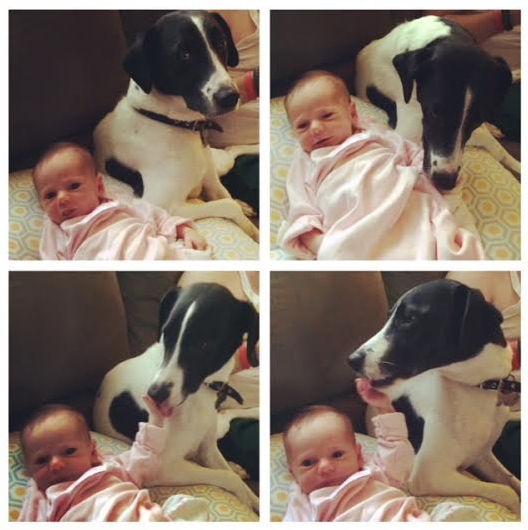