I’ll be honest – the inspiration for this post came from a Scary Mommy article about being happy.

And I’m realizing now how often I reference that site, when the truth is I don’t even like it that much, but Facebook seems to think I do so the posts are constantly in my news feed. I click on articles (from boredom), which further proves Facebook correct, and so the vicious cycle continues when in fact I would gladly click on other things if they were to show up in my feed. Which is why I (along with most people I talk to) kind of mostly hate Facebook and their stupid algorithms.

Similarly to how every month during Molly’s first year felt like, “the best month ever,” I feel like I’ve hit a high point of happiness lately. That’s why I rarely post anymore. Who the hell wants to hear about happy stuff all the time? My sad posts have triple as many readers and comments as my happy ones. Every post this year has fewer page views than the one before it. It’s like this blog is dwindling down to nothing, and it sucks, because I like this blog a lot.

Anyway, I’ve been thinking a lot about happiness lately. Remember those themed posts I mentioned last time? You might be seeing those as contributor posts on other blogs in addition to here. I’ve been going back and forth on whether or not I should start a new blog, actually, but I’m very nervous to leave this space and the loyal followers I’ve acquired. I like it here… I just need to figure out what this blog is going to be now. I want it to be more than sporadic monthly updates with a bunch of photos thrown in at the end. I’d like it to be something with a little more depth. But what that is, I’m not exactly sure.

Anyway, the full discussion about happiness can wait, but I wanted to share a little story in the meantime.

Two nights ago, we transitioned Molly to a toddler bed (her crib converted to a daybed) and moved Liam into her room (now their room). Prior to this, he had been sleeping next to my bed in the RNP. It was easier that way because he’s still waking up once or twice a night to eat, despite the fact that I’m giving him 6 ounce bottles every couple hours in addition to solid foods, which we started a few weeks ago (he’s not a fan of carrots, but he does love those prunes). But from all that eating he’s getting way too big for the RNP. It was time for a change.

As expected, Molly was overjoyed to have the baby sleeping in a crib next to her. She seemed unimpressed by the whole big girl bed thing, despite my attempts to hype it up. It was really cute though when we had the front part of her crib taken off and she came running into the room, gasped dramatically, and said, “Oh no, Mommy! The night night is broken!”

That first night could not have gone better… at least at first. I laid them both down, they smiled at me sweetly and “posed” for a photo, and within ten minutes they were both fast asleep. I thought to myself, “Seriously? Am I really this lucky?” 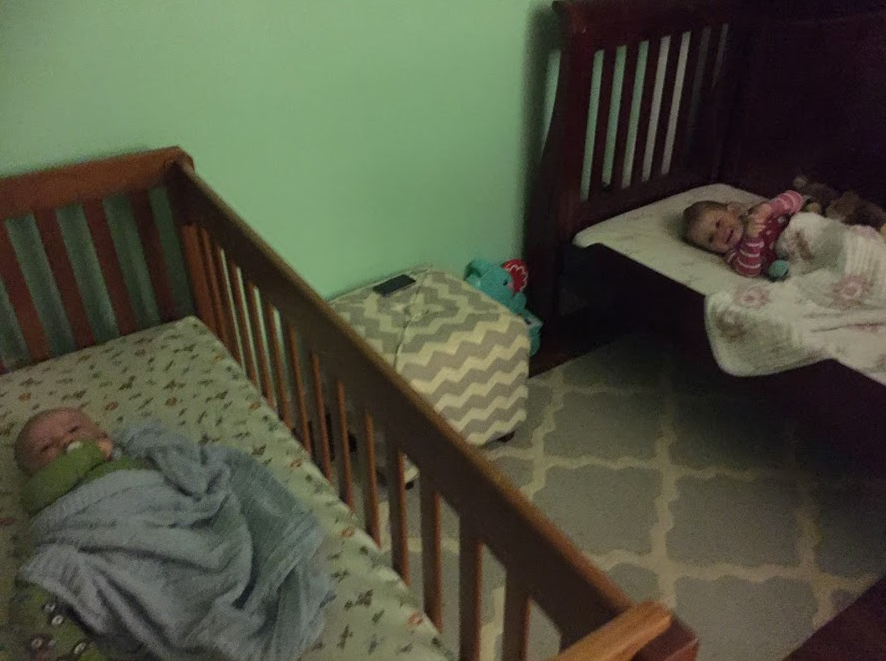 But this is real life, so yeah, that didn’t last long. Liam is getting over a cold he caught from Molly and thanks to post nasal drip, he has developed a persistent little cough along with his stuffy nose. He woke himself up coughing a couple hours after I laid him down, and since he was still congested, I brought him back into our room to sleep in the RNP so he could be elevated and breathe more easily.

Last night was a little trickier. I put Molly to bed at her normal time (8PM) and even though he was fussy, I put Liam down also. In no time at all they were both screaming. Awesome. So I went and retrieved Liam to put him in his swing in the living room. Molly was still whining but I figured she might just need a few minutes to adjust. Eric and I settled in to catch up on Game of Thrones. Liam was zonked out in the swing almost instantly.

A few minutes went by.

Then, we heard the pitter patter of little running feet. Guess who figured out how to get out of her new, bar-free bed? She came running down the hall elated, holding her iPhone aloft while proudly declaring, “Mommy, I did it!”

Did what? Escaped the bed? Unplugged the iPhone from the charger? All of the above? It was all so unclear.

I put her back to bed but she started screaming. Resigned, and wanting to see the crazy scene from GOT everyone was jabbering about Monday, I let her come hang out with us on the couch for a bit. After a few stolen bites of Chex Mix, some couch jumping, and apple juice, she decided Jon Snow was super boring and started demanding Peppa Pig.

So I put her back to bed again and this time she screamed and cried. I’d love to be able to ignore that, but I just can’t enjoy myself while she’s crying. Normally I would go sit in the rocking chair in her room until she fell asleep, but since it was so late already, I decided to be a top-notch parent and let her play on her phone in bed until she fell asleep. I know, I know, so awful. But…Daenerys!

After our show ended, Eric went to check on her to make sure she had passed out. Yeah, not so much. But at that point she was tired enough to let him take the phone away without complaint. Meanwhile, I moved Liam into our room, skipping the crib altogether because he was still super stuffy. And maybe I missed him in our room. Ok, so I’m having a little separation anxiety. But also, he does legitimately have a cold.

This is all a long-winded intro to what happened this morning, when I realized how ridiculously happy I am. Molly woke up way early at 5 and I heard her get out of bed to come find me. I fetched her from the hall and pulled her into our bed. This commotion woke up Liam, so the three of us hung out in bed together cuddling and talking for the next hour until my alarm went off (“Mommy! It’s the beep beep!”). And for that hour, I was definitely the happiest I’ve ever been.

I’ve talked about this before – nostalgia for the present. Happy moments that are tinged with sad because I know how precious they are and how much I’ll miss them one day. Everything about that hour this morning was so magical… not because it was some special day, but really because it wasn’t a special day. Nothing significant happened. I can’t even remember what we talked about. I do know it involved a lot of baby kisses, giggles, and silly songs. It was a random Tuesday morning that was so normal, but somehow it turned out to be perfect. Do I like waking up an hour before my alarm goes off? Hell no. Would I gladly do it every day if it means having mornings like that? Yes, a thousand times yes.

I’m also often torn in these moments because I don’t know if I should enjoy them or record them. The thing is, I remember thinking I’d never forget how Molly was at each stage, but I do. Going through old videos is so weird because I can only picture her as she is right now. Seeing her as a baby makes me smile, but that’s not the person I picture when I think about her. So long story short, I like having those old videos on hand to remind me of how she used to be. Eventually I did shoot a short video of our morning cuddle fest because I just couldn’t help myself.

And I don’t care if I lose more followers or if this post gets no comments or reactions because it’s too happy. This is just how it is. Right now, today, I’m the happiest I’ve ever been. Not the richest, not the thinnest, not the youngest. Not the least stressed out. Just… happy.

this about sums it up