Despite the amount of anticipation leading up to the event, not much went down at the pumpkin patch. It wasn’t very cold (mid-50s) but it was windy. Very windy. And while normally Molly loves being outside, she is not a fan of wind. 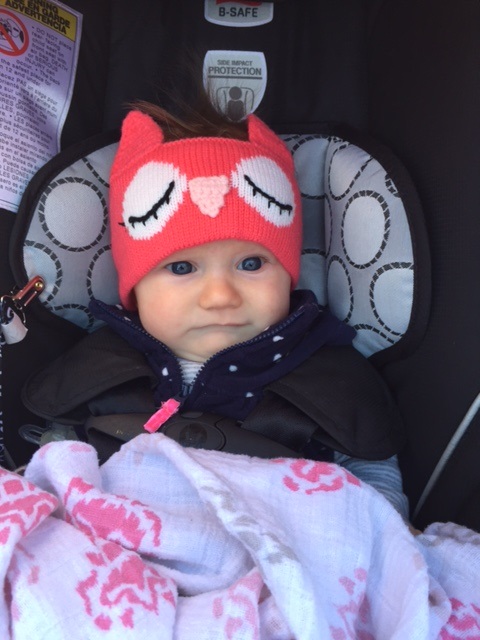 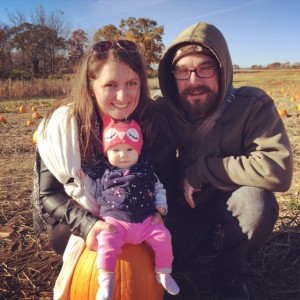 My sister and I both decided that pumpkin patches sound better in theory then they do in practice. Or maybe I’m just saying this because it was so dang windy. But all in all, it went ok. Obviously, she looked adorable. We picked out a little pumpkin for her. We took a bajillion photos. Eric and I also bought a gallon of homemade apple cider and have plans to make a warm bourbon/cinnamon/cider drink to enjoy while carving the pumpkins. It’s nice – usually I just buy a pumpkin, plop it on the front porch, and throw it away when it starts rotting in mid-November. But this year, we’re actually going to put in the effort to carve it. Apparently having Molly has inspired us to do cute and crafty family activities (not gonna lie – spiked apple cider is also part of the incentive).

Saturday we had a wedding to attend and left Molly with my parents for the evening. Apparently (and of course my mom only told me this later) she was inconsolable after figuring out that we had left her there. My mom didn’t want to bug us, so she called my sister to see how to calm Molly down. I have noticed that she’s been clingier than usual lately and doesn’t really like when people who she doesn’t know hold her (and she sees my mom once a week at least, so it’s not even like they’re strangers). She’ll tolerate it, but she keeps her eyes on me. It makes me feel special to be needed…but I’d also like to be able to leave her with babysitters when I need to. Everyone says it’s just a phase. Hopefully that’s true.

And thankfully she considers Ashley her second mommy, so dropping her off there every morning is no problem. I’m not even jealous of their bond anymore… I’m just relieved that she’s not crying and reaching for me when I leave. I couldn’t deal with that kind of heartbreak on a daily basis. I was a little worried this morning because she was watching me warily as I put on my coat (Yes, she was literally eyeing me up and definitely knew I was getting ready to leave…and she’s not even four months old. Child prodigy, ha). But Ash said she was fine. Apparently Aunt Ashley is an acceptable substitute for mommy.

Ok, now on to my crazy idea/question: have any of you ever considered a blog meet-up?

I don’t know…it’s just, I’ve been following along with your lives for several years now. I’ve laughed with you and cried with you. I’ve celebrated your joys and mourned your losses. I talk about each and every one of you as if we’re friends IRL (and still, my husband is always like, “Who?!!”).

So it just led me to the idea of doing a meet-up. Before I think about it too deeply, I guess I’m just wondering if there’s any interest. And I do realize it’s probably a lot to ask people, to use precious vacation time on relative strangers.

But then I think… couldn’t it just be awesome?

Obviously the big question is, WHERE? And for that, I turn to you. As much as I would love to have a big bloggy sleepover at my house, I simply don’t have the space for it. Plus Pennsylvania is a pretty lame state in general. I would be using this as an excuse for a little vacation, I’m assuming, so I’d like to pick somewhere cool. I mean, if one of you has a beach mansion off the Florida Keys, now is the time to say so!

Then I was thinking, do these already exist and maybe I just don’t know about them? I’m not really looking for networking or blog exposure or anything sales-y like that. More just fun times in a new place (maybe a festival? Wine festival?) and putting names to faces.

So I ask you – is this crazy? Or can we maybe, feasibly do this? I know many of you who live close to each other have already done something similar, so I’d love to hear your take on whether something like this is worth it or not.

So – worth it? No? Where? When? How? Or is it just too weird? Either way, it’s fun being friends online. I won’t be offended if you think it’s lame.

This is officially the most interrogative post I’ve ever written. Sorry?