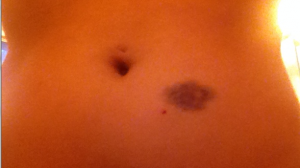 I’m going to let you all in on a little secret. Don’t get mad at me, OK?

I cannot explain it, nor can I give any advice on how to achieve it. Months ago I was a veritable bundle of anxiety, bouncing around worst-case scenarios and totally owning that shit. Not only was I highly stressed, but I was also kind of proud of it. I had issues. My stress was justifiable.

But lately, out of nowhere, I’ve adopted this live-and-let-live, whatever will be, will be attitude. I wasn’t even trying. In the past, every time that I tried to convince myself to calm down, I did so with the wink-wink, nudge-nudge of knowing it wasn’t actually going to happen. It’s like telling yourself to appreciate every moment, or don’t sweat the small staff. Nice in theory – mostly impossible to practice. Then something inside of me inexplicably shifted.

It was an interesting way to spend the 2ww (or in my case, 1ww). Of course I was aware that I could be pregnant. But… I didn’t think about it every moment. I didn’t obsess over when I could test. Actually, I didn’t even decide whether to POAS until this morning. This morning! As in, 2 minutes before I actually did it (I think deep down I knew I would. But I didn’t obsess over it like last time).

Despite my lack of nail-biting, I was extremely relieved to get that BFP this morning. Telling Eric was pretty funny, he could not have been less surprised. Later on he admitted to be hesitant to get too excited until 12 weeks, which I totally get. It’s scary and exciting. I fully realize that I should be freaking the hell out, but I’m just… not.

There’s a tiny, eensy weensy voice inside that’s wondering if my HCG levels are registering a positive because I wasn’t back to zero a week before the transfer. How high do your levels have to be to get a positive? Plus, I did get the HCG injection on Thursday with the transfer. Could it (gasp!) be a false positive? I suppose it could. I’m hoping not.

Beta tomorrow. Then a few weeks of terrifying ultrasounds. Then hopefully trimester two brings a sense of security.

But for now… calm. Maybe it really will turn out OK in the end. 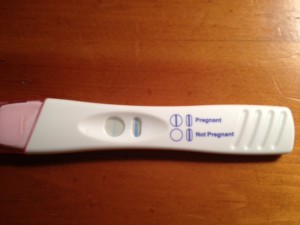