Timehop has me reminiscing hardcore today. Not just about 2015, but about all of it.

New Year’s Eve 2012 was the day I officially began IVF. My first injection. The crazy hope that it would lead somewhere positive (no pun intended). And also, when I read between the lines of the post I wrote that day, the smugness of believing it would work on the first try because at that time, I fervently believed that IVF was the answer to all my problems. It was, in a way. It was and it wasn’t.

We went to a party at the same house last night as we did on that night in 2012. That night I was filled with trepidation and hope and anxiety and I’m pretty sure I drank my way through it. I had been in Manhattan all day doing battle with the lab to get my results so I could begin the clinical trial. Then I had to rush uptown to a pharmacy before they closed before hurrying back to get on a bus to ride 2 hours home. I was so naive, so unsure, and terrified. I remember arriving at the party and trying to explain to someone what was happening. There were no words to convey everything I was feeling. It was like standing on the edge of a cliff and getting ready to jump into a dark unknown.

It’s funny – I never thought I’d forget where I started out, but I definitely do. It gets lost between the mundane everyday moments of wiping yogurt off a smiling little face and turning on that 35th episode of Daniel Tiger and changing the bajillionith poopy diaper. Deep down I always remember, but on the surface I forget.

So anyway, we went to that same party last night. But instead of drinking (like, at all, besides those few sips of champagne at midnight) I nursed my newborn son. Instead of worrying if I’d ever get to be a mom, I carried my two sleeping babies out to the car a little after the ball dropped, helped carry them into our house and tucked them in for the night. I can’t believe how lucky we are, how blessed we are. I can’t believe that 3 years later I have all of this.

And even though I didn’t drink last night, I did stay up until 2:30 because Eric and I have been binge watching Making a Murderer on Netflix and decided to watch one more ep last night. (It’s sooooo good.) So I’m also really thankful my two sweet babies chose today to sleep in until 9am. 2016 is going great so far!

Sorry that I never got around to a Christmas recap. It’s amazing how I manage to fill my days even though I’m not working right now. It gets to the point that I say, “I’m so busy! How did I ever have time to work, anyway?!” I think a lot of that will die down now that the holidays are over. The only thing on my January agenda is to organize my massive photo collections from the past few years. I’d really like to start making giant albums at the end of every year… sort of like lazy man’s scrapbooks. I’m going to try to be better about marking and filing photos to include in it throughout the year so it’s easier in December, but I also need to go back through and make one for 2015. And 2014. It’s no small task.

Real quick about Christmas – it was a lot more fun than last year. It’s so easy to shop for Molly now that I know her better… I knew exactly what she’d like to get. This year featured lots of babies to take care of, Elmo, and musical instruments. One of her favorite gifts is a kit of alphabet letters with Elmo on it. Whenever she sees it she yells, “The ed-a-det!” and then starts singing the song. I don’t think I’ve ever sang the ABC’s so much in my life. 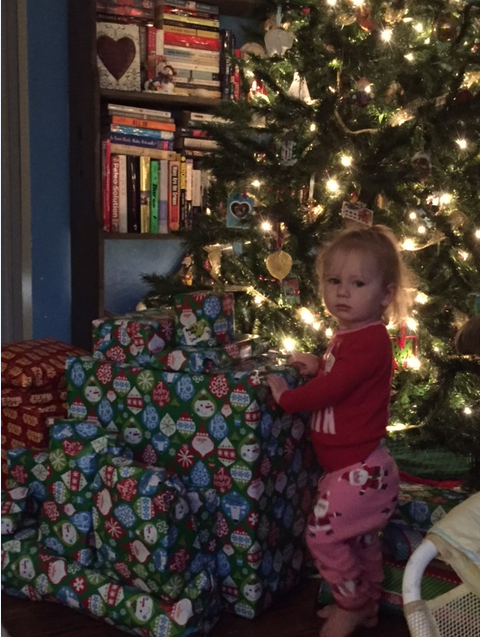 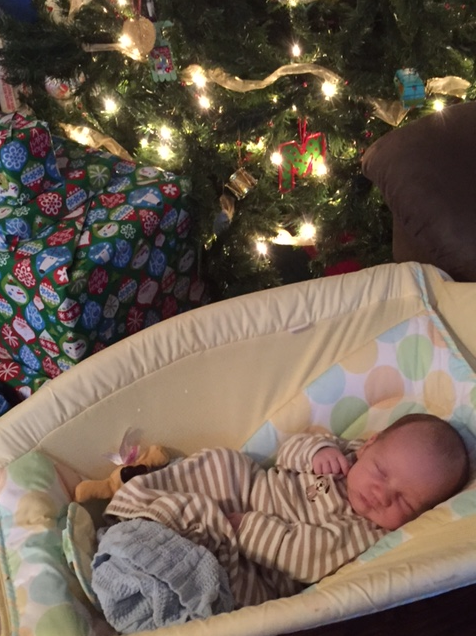 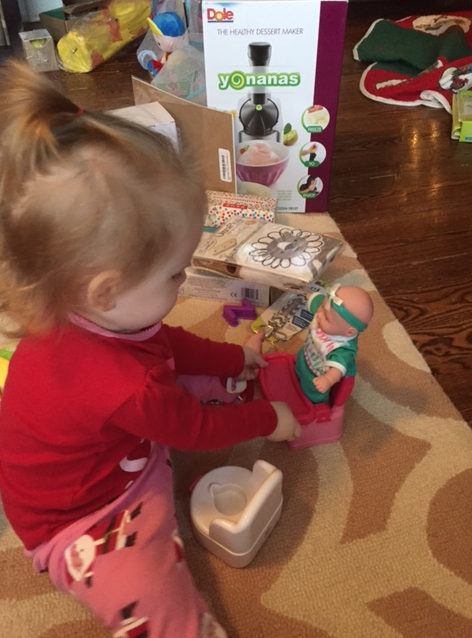 so many babies, so little time 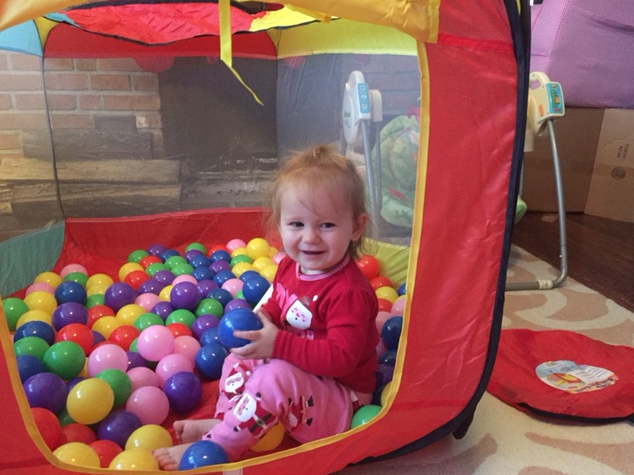 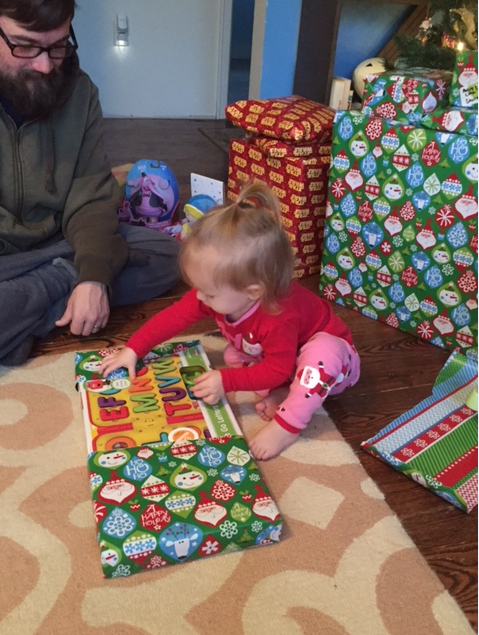 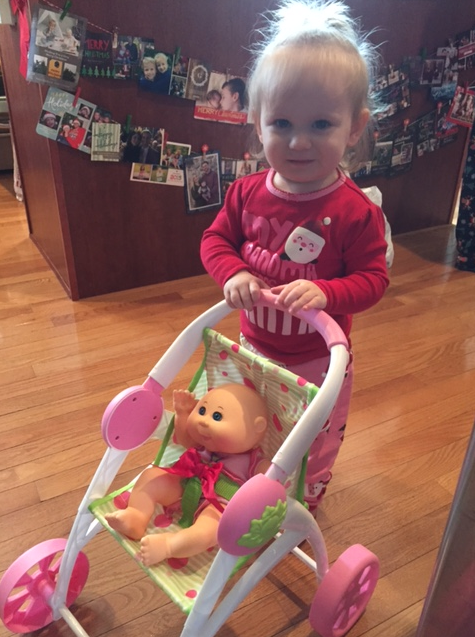 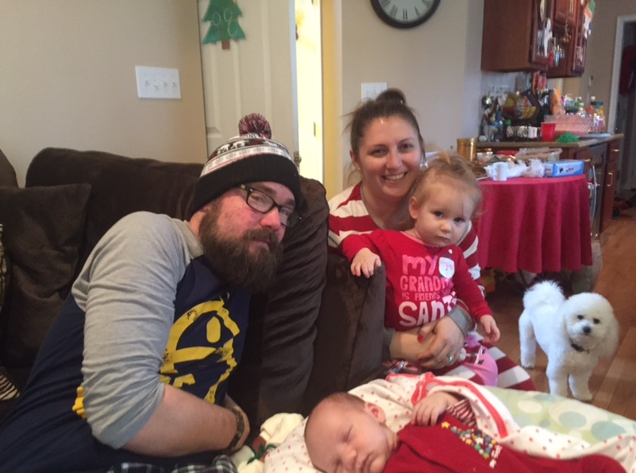 Liam was not so easy to shop for, and he didn’t get much stuff, but he didn’t seem to mind. This week he turned 1 month old. Not much to report… still eating like a champ, still looking indignant/pissed off most of the time but also starting to smile more, which feels like even more of a treat since his default mode is so opposite. He’s really starting to hold his head up and has already outgrown his newborn outfits and diapers. At the doctor last week he weighed 9lbs, 8oz, putting him in the 50th percentile for weight and somehow the 75th for height. Whose kid is this, anyway?! 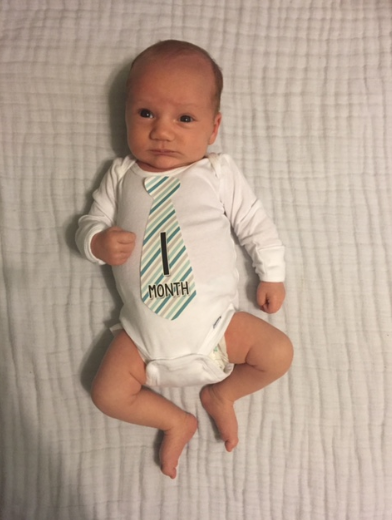 In related news, I feel like I’ve been out of work forever. I remember with Molly that 8 weeks was just the point that I started to think, “Ok, I think she’s sturdy enough to be left with someone else now, just for a few hours a day.” I don’t know if it’s because I’ve done this before or because Liam is so much bigger and more solid than she was at 5 weeks old, but I’ll just say it – if someone told me I had to go back to work tomorrow, I’d be sad of course, but I also think I’d be totally OK with it. Maybe that’s weird to say but it’s true. In a perfect world I’d stay home with my babies full time (though I would need to freelance or something, I’m beginning to realize, just for my own sanity). But I do like my job and I DEFINITELY like it better than where I worked before, so I don’t think my return to work will be awful. Plus my sister is already obsessed with Liam so I know he’s in good hands.

Enough rambling. I’m not one for resolutions (besides the obvious – lose 50 lbs before our beach trip in July). But here’s one I think I’ll try… this year, I’m going to make a real effort to let go. Can I be super cheesy right now and say “Let go and let God?” Because if there’s anything that 2015 taught me, it’s that you never know what’s just around the corner. You can make all the plans you want but sometimes, life happens very differently than how you think it will. I really doubt 2016 has another surprise baby in it for us but if it does, we’ll handle it. I have an amazing family and these beautiful children and truly, I could not ask for more. 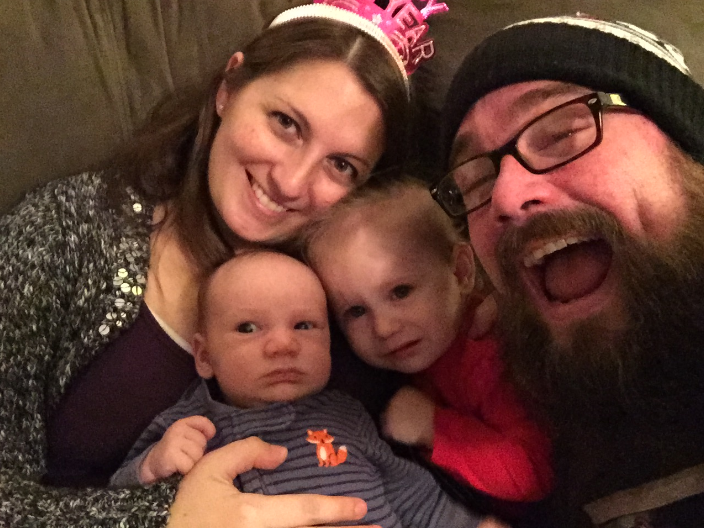