The other day a coworker found out I had a blog, and asked what I blogged about. It was actually a hard question to answer. In many ways I feel like this blog has an identity crisis. Usually I just say “lifestyle blog” when someone asks me that question, but I always clarify that I used to blog about infertility. For some reason I wear that as a badge of honor. At least back then I knew what the hell I was talking about.

Not having a purpose makes it harder to come up with posts. The weeks slip by and I start to feel guilty over not posting. Not because I have legions of adoring fans wondering where I’ve been (though honestly, I must, right?!), but more because I’m supposed to be a writer. Writing is my favorite thing to do in downtime (supposedly), and yet something that comes so easy when times are hard is next to impossible when times are good. It’s frustrating. Not that I should complain about being happy, but here I am…

What’s new? What’s shaking? Much of the same. Molly is absolutely amazing in every way, as usual. She continues to surprise and delight both of us with an independence that’s well beyond her years. What happened to my little baby girl?! My mom remarked the other night when we were over for dinner that Molly isn’t the least bit jealous of Liam because in Molly’s eyes, she’s not a baby, so why bother competing for attention with one? She thinks of herself as a Big Girl. She speaks in full sentences (sometimes with gibberish thrown in, but mostly coherent), follows commands (or at least comprehends commands and willfully disobeys them), and fawns over her brother like a little mother hen.

The other day Liam was fussing in the next room while I was trying to get ready for the day. Eric was around but ignoring/not hearing his cries, and since Liam is the second child, I didn’t drop my mascara wand immediately to go tend to his needs. After a couple minutes, Molly came into the bathroom and said, “Oh no, Mommy. Baby cry.” (Yeah, kid, like I can’t hear that.) I told her I would get to him in a minute. Thirty seconds later I heard him go silent, and then, miraculously, the sound of uncontrollable giggles coming from both of them. In that moment, I’m pretty sure I was the happiest that I’ve ever been, ever.

Next week we have our big family ski trip in Vermont, which seems to grow every year. We’re basically taking over an entire building of condos this time. Since it was such a mild winter, we’re not expecting any kind of world class skiing, but it’ll be fun to mess around and best of all I’m almost positive that they’ll have skis small enough for Molly. Obviously she’s too young for a proper lesson but we do want to pull her around a little on the bunny slope so she can get a feel for it. And take a bajillion photos, obvi.

Weight loss is slow and steady because I’m actually doing it the healthy way with diet and exercise. Sucks, right? I need some illegal diet pills or something because I’m super impatient. To date, I’m 20 lbs down from when I gave birth. Every day of eating clean feels easier than the day before to the point that if you waved a box of Thin Mints under my nose right now, I don’t even think I’d want one. We’ll see how long I can keep this up.

Liam is humongous. It’s weird because Molly was so petite. Still is, actually. The girl does nothing but eat but when I put her on the scale she weighed a scant 20.5 lbs. Meanwhile, Liam the Giant Baby weighs 16 lbs. Seriously! He’s already fully filling out his 6 month clothes (he’ll be 4 months old on Easter Sunday) and I had to switch him up to size 3 diapers because his size 2’s have been leaving imprints in his thigh fat rolls. In related news, there was a funky smell coming from under his chin(s), which turned out to be a rash and dirt hidden beneath all the chub. Disgusting, yet, hilarious!

The funny thing is that I think Liam eats less than she did at that age. She was eating constantly – I remember breastfeeding being such a time consuming endeavor. It felt like the minute I was done feeding it was almost time for the next go-round. With Liam, I feed him for anywhere from 10-15 minutes and he’s good. He’s just very efficient, I guess. We still have him sleeping in the Rock ‘n’ Play in our room, but frankly it’s getting hard to lift him into bed at night to nurse when I’m half-asleep. I just don’t have the upper body strength for it! He usually only wakes up one to two times per night, and is only up long enough to eat, which is very nice and I truly can’t complain.

Sorry guys, not much else. We have a bunch of super fun Easter-y activities this weekend, such as breakfast with the Easter Bunny at Wegmans on Saturday and then back-to-back egg hunts on Sunday morning. Fun times all around. Adorable photos to follow.

Hope all of you are having a great week! 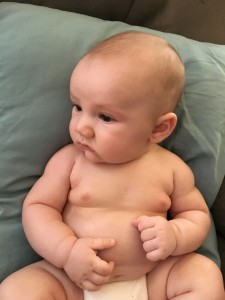