If you’ve ever watched Homeland, you know that Claire Danes goes off her meds and starts spouting conspiracy theories that are wild, crazy and color coded but that ultimately turn out to be accurate. I feel a little bit like that after yesterday’s post. Everyone who entertained my theory and gave me positive reinforcement, thanks. I know it probably sounds bizarre and sort of came out of left field. I still totally think that I’m right, but I also feel a little sheepish at how adamant I was that I’d “solved my problem” in one day. As usual, I need to calm down, be patient, and let things happen when they happen. I called my doctor and ordered the allergy tests. We’ll see what the results say.

I want to say thank you. Thank you for your kind words and virtual hugs and genuine concern. I always have the hardest time coming up with things to say when someone is going through something terrible, so when people take the time to put together a thoughtful sentiment, it just means a lot. I feel very blessed to know so many people (in real life and in the blogoshpere) who care so very much. Look at what my sister left for me yesterday: 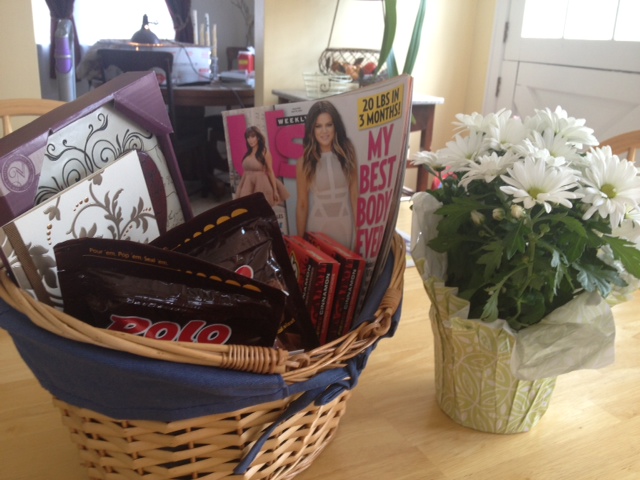 It’s kind of hard to see, but it contains chocolate, my favorite candy EVER (Hot Tamales), a trashy read (US Weekly), a cute decorative plaque, a candle and a card. She also got me daisies, which is my favorite flower. She is the sweetest.

Sometimes I get pissed off at how strong I am. I know that sounds strange, but it’s true. I got home on Monday, curled up on the couch with my dogs and my husband, ordered the greasiest, nastiest fried food I could think of and watched a few hours of recorded television. Anyone watch Shameless? Love that show. All was fine until one of the characters went for a 12 week ultrasound and I just hear Eric muttering, “Oh shit, that’s not good.” I survived watching it. People have babies and are pregnant right now, I know that. I forgot to mention on Monday that in the half a block walk between the doctors office and the subway entrance (literally… half a block) I saw two very pregnant women. One was rubbing her belly. It was gorgeous and sunny and people were outside being pregnant. Ugh, universe, you suck sometimes.

So back to being strong. By that first evening I was already feeling this steely resolve take over, but in a way it sucks. There’s a huge part of me that just wants to break the hell down and totally fall apart. I mean, really just lose it and wail, tear out my hair and be irrational. I want to physically be unable to get out of bed and face the world. Hell, I deserve that. But I can’t. Maybe it’s the control thing… maybe it’s just me. Trust me, I cried all day Monday and sporadically yesterday and today. My face is puffy and my head is pounding. I’m grieving. But it’s like right underneath that grief is this quiet inner strength that won’t let me lose my mind. It’s some part of me saying, “It will be OK. You will get through this and you will be stronger and you will have a baby one day.” So yeah… I wasn’t built for wallowing. I want to wallow so bad and I can’t do it.

Most people said things like, “I’m so sorry for your loss… please let me know if there’s anything I can do… my thoughts are with you.” All of these things were absolutely comforting and appropriate. But one person – the same coworker I mentioned yesterday who was recently diagnosed with breast cancer and underwent a double mastectomy – replied to my sad email announcement with a quick, “Are you continuing with the clinical trial? Do they keep trying until you are successful?”

At first I was taken aback but then I had to laugh. It’s just like someone who has recently gone through a tragedy of their own to be future minded and results oriented. Rather than sitting around moping, she expected me to have some answers. Rather than listening to ballads and drowning my sorrow in ice cream, she expected me to be in planning mode. I have to say I’m much closer to the latter than the former. I’m simultaneously crying and gearing up for round two. I’m both depressed and hopeful. I can’t sit here acting like things will never get better because I know that they will. (And the answers to her questions are yes and yes. The clinical trial keeps trying to get you pregnant for a period of 6 months or until you run out of embryos, whichever comes first. So they will be doing another transfer free of charge).

A few posts back I said I would be unable to suffer a miscarriage. That I would just not be able to deal with it (I would link back to it but I can’t even read my own old posts right now. It’s weird). Guess what? I’m dealing. I’m doing pretty well, all things considered. I’m amazing myself with my ability to breathe, regroup and even think about what the future will hold. Look, I got pregnant. It’s possible. It’s pretty fricking scary knowing that it can all end so abruptly, but it’s also uplifting to know that it can happen. I’m no longer terrified of pee sticks (now I’m terrified of ultrasound wands). I’m further than I was before even though I have far to go. And so many of these women who have had miscarriages have gone on to have healthy pregnancies. It can totally happen.

It’s kind of like a morbid infertility rite of passage. How many of us has this happened to? I thought I was immune. I thought I was somehow going to beat the system and overcome the odds and just sail right along to happy pregnancy land. But that’s not what happened and I’m amazed at how many women – both fertile and infertile – have comforted me by saying, “I went through this too. I know exactly how you feel.” This is just another club I never wanted to be part of and never imagined I would be part of. I hate this club and I wish it was disbanded, never to recruit another member again.

Now I’m going to get a little religious because, well, I’m religious. I believe that these babies are in heaven right now. So when I found out our babies would not be joining us here on Earth, I just kept picturing them up in heaven with many of our grandparents, my lost siblings and my Uncle Jim, all just hanging out. I may have even whispered up at the sky, “Take care of them until I get there.” These thoughts are enormously comforting, no matter what you believe. A lot of times this life is shitty and hard and they got to skip that whole part and just go right to chilling with Jesus and my deceased relatives every day. It makes me feel so much better. And this one thing I found on Pinterest makes me cry more than anything else, but cry in a comforted, validated way: 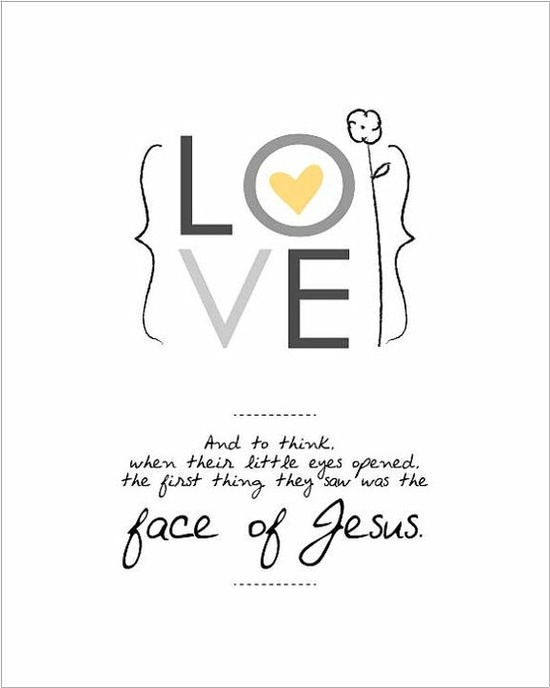