The embryo transfer went just as expected yesterday. I basically feel like an old pro at this. Big shock of the day? Only one transferred this time, not two. But more on that later.

I hate to associate this experience with “signs” or jinxes” or anything silly like that, because I’m still more than a little heartbroken over the psychic prediction that was so, so wrong. You can’t count on coincidence or happenstance. But it is… interesting, let’s say, that this our third time. Because of the well-known adage, “third time’s a charm,” and how that relates to us specifically.

You may recall that Eric and I did not get married the first time we got engaged. Nor did we get married the second time we got engaged. I could go on for days with all the reasons, but for the purposes of this post I’ll just say this: people were pretty skeptical when we got engaged for a third time. Hell, I think even we were skeptical. There may have been some sort of betting/pool over whether we’d actually go through with it among family and friends, but that’s never been confirmed.

When he proposed time #3, he had a new ring. I can’t say I was particularly shocked on the night it happened because we had been talking about it, we were on our annual family vacation at the beach (also the site of proposal #2, heh), and he asked me to go on a random night walk on the beach. So getting the ring… not a surprise. But he did get me something sweet that I didn’t expect – a charm with a heart and a little engagement ring that was engraved with “third time’s a charm! love, Eric.” I love that. And when things started going downhill last time, Eric’s mom even said, “Oh, it’s always the third time that works out for the two of you.”

Anyway, back to yesterday. My mom came with me this time. They don’t allow anyone past the waiting room and Eric despises NYC, and probably despises waiting around doing nothing even more than that (severe ADHD). Again, he asked if I needed him to come, and again I said no, I would be fine. It’s not a huge deal. Also, lunch and a little shopping with my mom afterwards sounded highly appealing.

We got to New Hope with plenty of time to spare. They called me back into the procedure area and showed me the printout picture of my embryo – singular. At first my heart sank, assuming one didn’t survive the thaw. But then when I questioned her, the check-in person said no, I still had three left. They automatically did one since my results aren’t being included in the study anymore; apparently you have two tries max for that. So… one, then.

I was thrown. First thought: why the hell are they doing a free transfer if I’m not even included in the study anymore? Second thought: shit, I kinda thought I might want to have twins. Third: Last time only one stuck. Should I do two?

The third thought I voiced out loud, and the check-in girl brightened, “Oh, you want two? Ok, you just wait one hour, we can defrost another one.” I mean… how weird is that? An hour to defrost your child? Like a pound of chicken breast. This whole thing is just so bizarre.

In the end I opted to just do one. Both the check-in person and the embryologist commented on how “beautiful, perfect” it was. I now have two successes under my belt, and I just have a good feeling about this time all around.

The procedure went smoothly. I left with a script for Lovenox that I have not filled yet. I hear it’s quite pricey, so I don’t know. I should get my clotting result tests back this week, which is also conveniently when I can test. AHH! Beta on Saturday.

You know the drill… I need your thoughts/prayers/vibes for now. I know I already have them. It amazes me sometimes when I find out all the random people keeping up with my blog and thinking of me… so humbling. Thank you all for being there for me.

Sorry this isn’t the most eloquent post. I did a lot this weekend and I’m sorta exhausted. Hope everyone had a great weekend. And because I did it for the other two, I need to share baby’s first picture below. A so-called “beautiful” 5-day embryo. 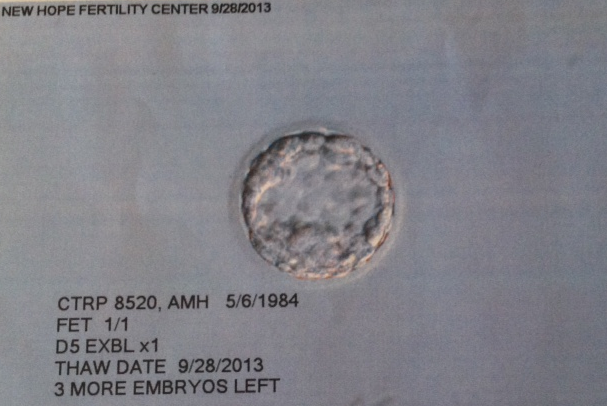