I’m feeling very guilty about this pregnancy in general.

It’s inevitable, isn’t it? There’s so much fuss and fanfare with the first, especially when that first is preceded by so much loss, hope, and heartbreak. Every single moment of my pregnancy with Molly felt like a miracle. I walked around in a constant state of awe and gratitude. And to some extent, this pregnancy is even more miraculous – I mean, against all odds, against any expectation or inkling or dream I dared to dream, it happened. So I’m trying to figure out why it’s just not the same.

Someone recently requested new bump photos be added to the “bump” on this blog… how awful is it that I didn’t even think to do that? I will eventually. My belly popped out at like 7 weeks and not much has changed since then. I look like I’m 13 weeks, but I have for many weeks leading up to actual 13 weeks. As of today I am 13 weeks and 3 days pregnant.

I just remember being so freaked out over setting up Molly’s nursery – thinking about it even before I hit the midway mark. For this one my sister-in-law has been eagerly texting me with nursery sets listed for sale, as I think, “Crib? Yeah, I guess we’ll get a crib…”

I’m trying to figure out if this calmness is because I (sort of… kind of…maybe) know what I’m doing this time around and know what to expect, or if it’s just because it was such a shock that I’m not believing it’s really going to happen. For example, the crib – Molly slept in her bassinet for the first few months, as I’m sure this one will too. So realistically I don’t have to buckle down and worry about a crib until next year. Plus, my sister has an old one she’s willing to give me. As for the rest of the furniture… the nursery is already set up, and if it’s a girl, we are really set to go because I have a bajillion clothes in my attic (though they’re all the wrong season – grr).

We have a 3 bedroom house but one is set up as Eric’s office/man cave and I just don’t see where else to put all that stuff. So for now, the babies will be sharing the room. I’m anxious to see if he goes apeshit crazy if it is a boy and decides to throw all his office paraphernalia in the basement to build his son the ultimate boy room… time will tell. My gut is still saying girl. Girl or boy, the walls of the nursery are green, and I guess we can swap out the pink lace curtains if the revelation of a son does not properly motivate my husband.

I went for a sequential screen at the Perinatal Center today even though I didn’t opt to have one with Molly. It’s something that they push at my OB/GYN office and let’s be honest – I’m a sucker for extra ultrasounds. Everything for baby measured right on track and no issues to report. I don’t know if they all just look alike at this stage but my goodness, one look at the photo and it felt like deja vu. Like, hang on a sec… I’ve had this baby before. 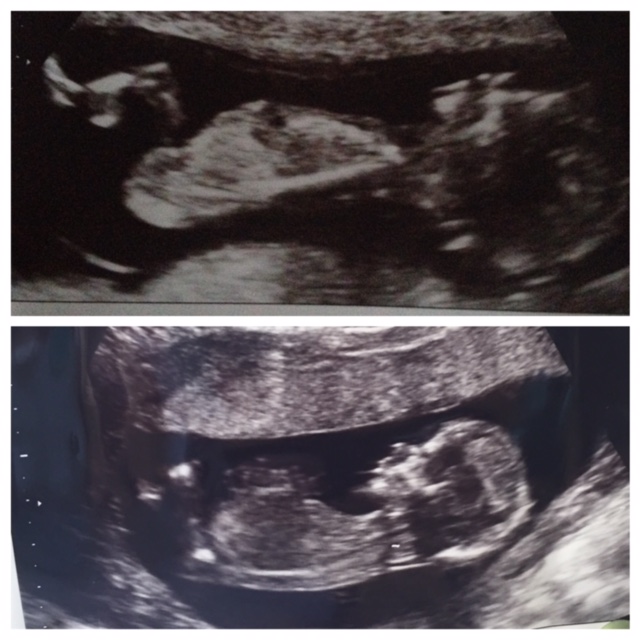 I hung the photo up at my desk and I’ve been catching a glimpse of it out of the corner of my eye and smiling all day. The further along I get, the more “real” it’s becoming. It may not be the same as my last pregnancy, but it’s incredibly special… in a different way.