In honor of my three year wedding anniversary tomorrow, I have a sort of lovey-dovey post.

I’m not one for mushiness. Eric and I are a make-it-through-anything, meant-to-be-together couple, not an in your face, so-cute-it-makes-you-want-to-vomit couple. Some of the strongest indicators of his affection often come in the form of actions, not words. This weekend he put away the clean dishes without being asked. Yes, it’s minor, but to me it spoke volumes. This weekend he also built me a garden.

In this post I mentioned that Eric’s solutions to problems are often well thought out and elegant, whereas mine are slipshod quick fixes (somehow he took this as an insult, though it wasn’t intended to be one). Allow me to clarify this further. When we first purchased our home, the kitchen featured custom built, solid wood shaker style cabinets in a dark oak finish that were covered in about 20 years of caked-on grease. They were literally sticky to the touch; it was disgusting. However, these cabinets were so gorgeous that anyone with a little bit of vision could see the potential. We immediately disassembled the cabinets with plans to paint them off-white to brighten the whole kitchen. Once the doors came off, we noticed that the base underneath the sink had gotten wet and rotted out. Eric immediately made plans to replace the wood and rebuild a sturdier bottom to support our under sink necessities. Guys – this. project. took. days. It’s my absolute favorite example of his meticulous project planning because I was so fixated on the real project at hand – the cabinets – (which were also the biggest pain in the ass and took well over a week to complete) that I did not give a shit about a stupid under the sink cabinet base that no one would see again ever. I got frustrated. I’m sure I said some harsh words. But now? I have a cabinet base that won’t ever fall apart again. It’s already gotten wet due to some faulty plumbing and has withstood the test of moisture. Had it just been me replacing it, in typical slipshod fashion, it would probably be a soggy, unusable mess again. I’d be spending double the time on a self-described “stupid project.”

So back to the garden. I’ve always been wanted a backyard vegetable garden in a vague, daydream-y way, but haven’t really done anything about it. It seemed a huge undertaking, and lets be honest – I’ve never had much of a green thumb. I just want to have a green thumb, and that’s definitely not the same thing.

I got out of work early on Friday and didn’t feel like going home, so I called my mother-in-law to see if she was going out shopping. She said she wanted to head to the local nursery and use up a gift card that she had won, and that’s how I unexpectedly ended up with a blueberry bush and tomato, squash and pepper plants that needed a place to be planted, preferably before they shriveled and died. I was stressed out immediately.

We had a couple of things planned for the weekend and as usual, Eric’s list of priorities differed a bit from mine. He wanted to fix the heater in our camper and build a fire pit out of a pile of rocks in the backyard, whereas I just wanted to “make the yard pretty.” When I explained in increasingly panicked tones that I needed a garden before my poor plants died from inexcusable negligence on my part, he sighed in exasperation. I figured this would be another month-long fight ending with dead plants, tears and resentment. But then he surprised me and moved one of my priorities to the top of his list.

We had an above ground pool that got destroyed during a freak October snowstorm, and Eric had torn down the pool and ripped out the pool deck, which is why we had some extra lumber lying around just taking up space. Eric took that wood and began to build me my garden, almost as though he knew what I wanted more than I knew what I wanted (probably true). It didn’t take days; it took hours. By Monday evening, I planted those tomatoes, peppers and squash in a garden that I didn’t even know I needed but am now convinced I absolutely cannot live without.

You see, he doesn’t always do what I want him to do. We don’t have enough money to go away for the weekend to celebrate our anniversary. But now I have something – a tangible representation of love that will (hopefully) bloom and grow for the whole season. And that’s more precious to me than a cheesy, sappy card or an overpriced B&B stay could ever be. 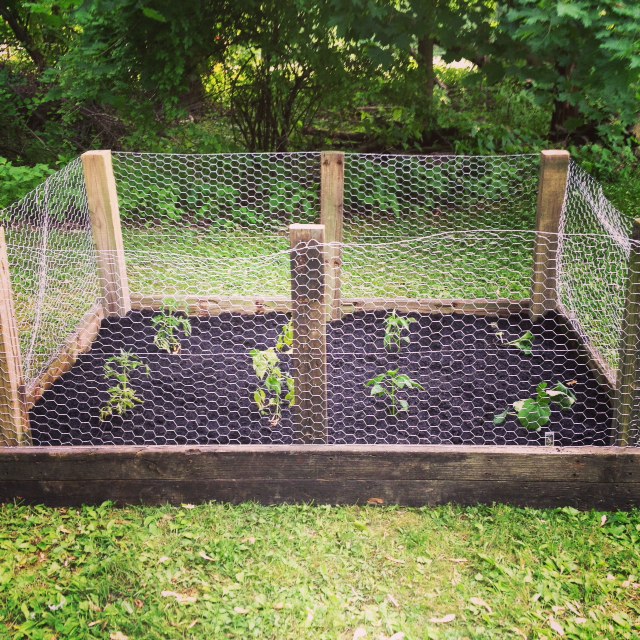