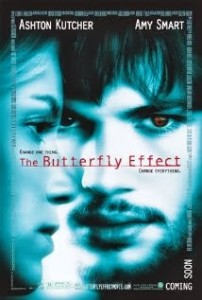 The other night I was trying to explain the butterfly effect to my mom. In case you’re unfamiliar, besides being a thought-provoking and highly dramatic 2003 movie starring Ashton Kutcher and Amy Smart, the butterfly effect is (according to Wikipedia): “the sensitive dependency on initial conditions in which a small change at one place in a deterministic nonlinear system can result in large differences in a later state. The name of the effect, coined by Edward Lorenz, is derived from the theoretical example of a hurricane’s formation being contingent on whether or not a distant butterfly had flapped its wings several weeks earlier.”

That seems a little far-fetched, but if you watch the movie, it puts into more practical applications and helps the whole thing to make sense. Basically going back and changing one aspect of your life, even a small one, can impact everything else in ways you can’t even imagine. Our lives are intricately woven tapestries made up of the choices we have made up until this point, and changing one small thread could impact the pattern beyond recognition.

Anyway, when I was discussing it with my mom, she immediately said she’d love to go back and go to college rather than starting her career right out of high school. We talked about how if she had done that, I would not exist, nor would any of my siblings. Each one of us was created at a specific moment, and had anything else been different, it could have so easily gone another way – a topic I can’t think about in too much detail or I end up saying, “Ew, gross.” (we are talking about parent sex here).

But that got me thinking about my journey. I could go on for days about all the major life choices I would have done differently – in high school, in college, in relationships, with money. So many things I wish I could have a redo on.

But here’s the part I find interesting.

A lot of times this whole “butterfly effect” thing is used to justify shitty situations. Like, you needed to go through some tough times to get where you are today, et cetera. So in my case, one might argue that if I hadn’t had those two miscarriages, I wouldn’t be having the baby I’m having right now, so I should be thankful for THIS particular baby.

Except that I would.

Because this is IVF.

So it feels like I’m “playing God,” so to speak, and in my opinion, I certainly should not have this kind of power. But then again, who knows… who knows. Would we ever have been able to mentally and psychically have all 8 kids if it had worked the first time and I wasn’t miscarriage-prone? What if there’s a fire in the lab and everything is destroyed tomorrow? (This is a worry that keeps me up nights, actually). What if having *this* child 6 months ago would have resulted in SIDS, or a car accident, or some other disaster, so really now is the only time to have him/her? Yup, I do get morbid when I’m hypothesizing. But I’m just trying to believe that despite my meddling, things are still happening the way they’re supposed to.

I don’t really know the answer, if there even is one. It’s just so crazy to think that timing has almost nothing to do with it, and if I choose to have another child in 2 years or 3 years, it doesn’t really matter because I will be getting the exact same child. The butterfly effect may hold sway over other aspects of my life, but for this one thing, it does not.