Ever have one of those weeks where you think to yourself, “Where am I and what happened to my life?” That’s how I’m feeling right about now.

First – the new job. Without giving away too many specifics, I will tell you that I’m working for a pretty big cigar retailer as their first official full time copywriter. Me, a girl who has had approximately two puffs of a cigar in her entire life is now tasked with speaking eloquently about a topic that has a shocking number of insanely knowledgeable devotees. Intimidating? Yeah, a little. And lest you think I’m sitting there filling out new hire paperwork and smiling sweetly, the answer is no, I was thrown right into the mix with a gigantic amount of copy to write on my very first day. My motto of the week? Fake it ’til you make it, baby, and hope like hell that these cigar dudes don’t see right through me. I can’t help but compare it to a fertile Myrtle introduced to an infertility blog with no compass, attempting to decipher “ZOMG the bitch got a BFP after my BFN on an HPT on 9dp5dFET after an IUI, good CM, primo SA and so now I hope AF doesn’t come before the beta!” That’s me, at work, except it’s all like puro and figurado and ligero and I just look at them like, “Whaaaaa?”

Granted, my employer knew my level of interest/exposure to cigars (um, NONE) prior to hiring me, so they must have just liked something about my writing. Or, they made a terrible mistake. Hopefully not the latter. So far it’s been fun, and everyone clearly loves working there, and I feel important and respected with less than a week under my belt. So it’s not bad, it’s just… different. Just wait, in 6 months I’ll be this kickass cigar smoker with a terribly refined palate. And if you’re a true friend, then right now you’re saying, “No, Amanda, in 6 months you’ll be pregnant and not smoking cigars at all.” Right?!!

Next – I got my period today! And a week early by my count. Which is good, because I was about to bust out the zipper on my fat jeans (you may recall that I’ve done this once before) and have been crying at Zillow commercials for the past few days. Good to know it’s for a reason and not because I’m going cuckoo for cocoa puffs. Aaaanyway, the first thing I wanted to do when AF showed up was call the doctor, because seriously, doesn’t everyone call the doctor when they get their period? I texted Eric and said, “We need to talk about my period,” to which he was understandably confused, but yeah I just felt like more action was necessary. I have spent the entirety of 2013 calling people to announce the advent of my period. Literally, since January. I’ve either been pregnant or getting ready to get implanted. This is my first break all year… it was weird to accept. But I did sit down with me and ask, very gently, if I even wanted to call New Hope. And the answer was no, I’m not ready. I know we had already decided to wait, but I was secretly worried that when the time came, I wouldn’t want to wait. The truth is that I do need to wait, and I want to wait. So it’s alllll good.

And of course a tiny annoying voice kept saying, “Maybe you’ll conceive on your own this month,” and of course I was like, “Shut up, stupid tiny voice, what makes this month different from the freaking two and a half years preceding our IVF cycle?” It’s not. I mean, the difference is that I’ve been pregnant. So now I think my subconscious got cocky, and she’s like, “Girl, we got this.” But we don’t. I got pregnant from pre-fertilized embryos, not from a glass of wine and an OPK. It’s just insane to think it could happen. But damn, that would make things so much easier.

Which brings me to my next weird moment. Today I was perusing my new benefits package when I came across a line that made my little heart stop with hope. Under Infertility Services it said “covered in full after deductible.” Which is totally too good to be true, and which isn’t true at all, it turns out. I went running in to Eric squealing like we hit the Powerball until I saw the next line, which said Assisted Fertilization: not covered. Why are those two things separated out? Could it be any more unclear? I’m assuming it just means they cover the testing and not the treatment, because they are total and complete assholes, but did they really have to get my hopes up like that? I guess I will have to ask to confirm (hello, awkward conversation with HR department at a new company).

One thing that is surprisingly covered, however, is infertility drugs. They give you up to $2,500 for your lifetime. Of course we’ve already spent more than that, but there’s more to come, and that’s pretty good. Better than what I had before ($0), so no complaints here. Why are they covering drugs and not treatment? Because they suck. Insurance companies: blah.

That’s all for now, dear friends. I no longer have time (or, ahem, permission) to sit there catching up on blogs and Facebooking all day, so I’m frantically trying to catch up on all my feeds at night while still doing the cooking, general household maintenance, and oh yeah, working later in the evening. Phew. Is it Friday yet? 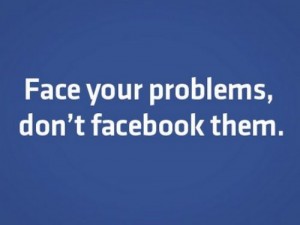 I recently rediscovered all the infertility blogs. I’m not really sure why I ever forgot they were there. Yesterday afternoon I was bored and had just done a little redesigning on this blog, so I decided to head over to Stirrup Queens and start searching around. One hour of reading turned into seven.

As much as I appreciate all the kind words and support of family and friends, there’s something about reading tales of other IF journies that gives me contentment. The world of IF blogs makes me feel… normal? Yeah, that’s it. Like I totally fit in.

I remember back when I had my old blog, I used to feel a little thrill of shock when I saw someone posting with their real name and picture on an IF blog. I thought to myself, “Wow. Ballsy.” But now I’m one of them and I take it one step further – I post that shit on Facebook. Yeah, that’s right, all 308 of my friends and frenemies and old high school classmates know my most intimate secrets. Why did I start doing this? Well, for one thing Burnt Toast started out as a blog about living with dogs and chickens, not about infertility. That one bomb-drop post was sort of unprecedented.

I’m starting to realize that I posted spoiler alert because I’ve been incredibly cocky since we got accepted into the clinical trial. I can tell you I’d never be writing about this and sharing it with everyone if we weren’t doing IVF. On my last blog there was a lot of complaining and not a lot of problem solving, whereas here I’m actually going down a road. It may not be a guarantee, but it’s a hell of a lot better than just sitting around whining.

That’s not a dis to anyone who remains anonymous by any means. Sometimes it feels a little weird knowing that anyone on my friend list may know when I’m ovulating. But I figure I give enough disclaimers and clicking on the links is a conscious choice, so if you know that about me, it’s your own fault for looking. It’s not like I’m putting “Ovulation day – YAY!” as my status. It’s basically a good way to keep everyone who cares up to date with what’s going on.

I also wasn’t prepared for any backlash. Again, I’m not sure why I think I’m immune to these simple things. And 99% of you have all been supportive, so thanks for that. I’m hesitant to say anything about that other 1%, so I’m just going to leave it at that for now.

I noticed that I’ve been making my posts like little stories with intros, middles, and hopeful little end phrases. I don’t know why I keep doing this. Blogging is kind of hard because nine times out of ten I hate what I write three days later. It sounds less cheesy when I’m writing it, and then I post it, and then I go back and it sounds all chipper and happy and fake. I think a part of me is trying to maintain this veneer of perfection for all those Facebook followers just so no one gets uncomfortable. And that’s why it’s really refreshing to go back to my anonymous IF sisters and see the nitty gritty, which makes me want to get back to speaking from the heart with the good, the bad and the very ugly. Going through IVF is harrowing. It’s messy, it’s weird, and I hate it while simultaneously being so grateful that I have the opportunity to do it. So there you have it. If you came here looking for sunshine and roses, I don’t have any. I’m terrified out of my friggen mind. And if I recently showed up on your blog with a random comment, I want to thank you for reminding me why we’re doing this.