Yesterday my friends and I planned a day at the beach to celebrate one friend who turned 29 on July 1st and one who turns 29 today. The weather ended up being absolutely horrific – I’m talking a downpour on the way there, overcast and freezing when we got there and gloomy all around. But we did have a lovely time just hanging out all together and even sat our butts on the gray and cloudy beach for a whole hour before the skies really opened up (and we thanked our lucky stars for the existence of beach tents and umbrellas). The day was pretty terrific except for one little thing – my throat hurt. A persistent tickle started midway through the day and progressed into full-on sore throat as time went on. I was, understandably, freaking out. Did corn syrup somehow sneak into my food?

My only stray from bottled water was when I stopped for coffee at Dunkin Donuts. I ordered an iced decaf with milk and Splenda (that’s what I always drink), but maybe they used creamer? Or something else evil? Usually creamer doesn’t even have corn syrup, plus I ordered milk, but I can’t think of any other explanation. Something I ate or drank was an epic fail.

I tried my damnedest not to worry about it too much and just enjoy my day. By that point it was too late to do anything anyway. I got home in the early evening and settled in to watch two glorious hours of The Bachelorette. I was home alone (Eric was off on a road trip buying a truck from a coworker) when all of the sudden I felt a “whoosh!” down below. Don’t panic, I thought. Until I went to the bathroom and checked. Bright red blood. Bright freaking red.

I bled for a minute, tops. I’d estimate it was no more than a teaspoon, and it stopped as mysteriously as it started. I walked carefully back to the couch, sat down in a daze and started calling everyone who could offer any words of wisdom. Eric said it’s totally normal and I should calm down because stress makes it worse (uh, yeah). My sister said she bled for hours like a period while pregnant with her son. My mom bled with my brother. I started to feel marginally better, but was still on edge. Between the corn syrup scare and the bleeding, July 1st was not a very good omen.

I woke up with an incredibly stuffy nose and a less sore but still not back to normal throat. I didn’t bleed all night (trust me, all I could imagine was waking up to sheets soaked in blood). I went to work since sitting home would only make me more stressed. I called the OB/GYN first thing in the morning and was half hoping they would say, “No big deal, don’t worry about it.” Part of me was terrified to wait until Monday to do an ultrasound after yesterday, but another part was worried that them bringing me in signaled a reason to worry. Probably because of my history, they did request that I come in for a scan. So I got a surprise ultrasound this afternoon.

I was a bundle of nerves in the morning but as the day progressed I calmed down significantly. Everyone kept telling me to relax and I kept trying to relax but I know how wrong these things can go. I’ve been there. I’ve done that. I kept trying to logically think why there would be blood. I mean, there shouldn’t be blood, right? Why would I bleed? Last time I was spotting post-intercourse but it was traced to that specific event, plus it was light pink and non-threatening. This blood was so red it practically glowed. AND the nurse asked me that – what color was it, did you have intercourse prior. So I assumed them forcing me to come in had to do with the fact that neither of my answers were acceptable.

I had to wait until 3 for the appointment. I won’t beat around the bush: there is one baby and one THANK GOD I CAN SEE THAT LITTLE FLICKER heartbeat. There is also, somewhat alarmingly, a large gray mass in there which the tech had a few suggestions for. She said it could be super fattened up lining from the PIO shots, it could be subchorionic bleeding (basically, blood clots in the uterus that are usually benign but can cause some bleeding) OR it could be the other embryo that attempted to attach and did not develop properly. No matter what, there was a 6 week 1 day little bean in there looking just fine.

There was a huge sense of relief in seeing that heartbeat and in the nonchalant way everyone talks about first trimester spotting. Really no big deal. But then as I was standing at the reception desk scheduling my next appointment, I started bleeding again. And, well, I’m still bleeding right now (3 hours later). It’s kind of on and off but it’s definitely more than a teaspoon this time. The only thing keeping me from absolutely losing my mind is that I know her poking around in there with the ultrasound wand probably disturbed Weird Gray Mass AND that three hours ago, one of my babies was doing just fine. But damn. Can the flow just stop now so I can stop worrying for half a second?

The tech said that New Hope should be able to determine what Weird Gray Mass is at my next appointment or the one after as things develop further. In the meantime I’m laying on the couch like it’s my job and wishing like hell that I had a backup supply of maxi pads, but I figured keeping them in the house would “jinx it,” so I literally have none.

And in case anyone was keeping track, this is all right in line with what the psychic said. My friend said earlier that my gender reveal party will be the most underwhelming thing ever since clearly I’m having a girl in February. Honestly, that’s one of the few things keeping me from curling up into a ball and sobbing at how much a jerk my uterus is, messing with my mind like this.

That’s all, folks. A healthy dose of drama as we march on towards Monday. 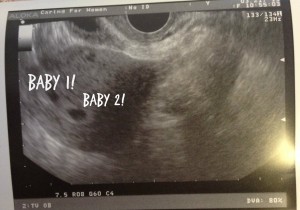