I have two stories about psychics. Ready? Here we go.

I also mentioned that I pestered her for weeks afterwards for more than she originally told me. Well, she gave me more. Specifically, she said that she wrote down (in reference to my situation), “the second one sticks” and “she will have a beautiful baby girl.”

Guys – I totally worried about this when I first heard it and again when I got pregnant. First of all, “second one sticks” to me sounds like second try. At the time, I believed that it meant I would have a miscarriage, and it scared the crap out of me. Of course when I got pregnant with twins, I assumed “second one sticks” meant second embryo sticks in addition to the first. Duh. Everything that psychics say is not literal.

What worried me then was the “beautiful baby girl” comment. Girl. A girl. Singular. Again, I tried to justify this by saying that maybe one would be a girl and one would be a boy, and the girl would just be particularly beautiful. Plus, IT’S NOT LITERAL. I had never even met this woman. But still, I couldn’t shake a funny feeling about it.

That’s not to say that I had any inkling that the pregnancy would go so horribly wrong. I put the prediction out of my mind (mostly) when I saw that first ultrasound. All looked good. The psychic was wrong. Whatever. But then… the impossible happened. We lost them. And “second one sticks” started to sound so relevant again.

As far as February… well, the first embryo transfer was in February. The embryos were created in February. But now I’m just thinking…this second transfer is going to be early June, which, if successful, would give me a late (or early, if it’s twins) February due date. For the second one. And NOW I’m officially freaked out, despite the fact that I could certainly have two again and she only saw the one girl. Maybe one will be kind of attractive, but smart? Maybe only one will take? Oh, I could do this allllll day. Maybe, maybe, maybe.

Of course, I want to believe all this because it would mean that I carry this next baby(ies) to term, and that she (they?) will be stunningly beautiful. If nothing else, it will help calm my nerves when I (hopefully, oh so hopefully) get pregnant again. I’m already dreading pregnancy as much as I’m looking forward to it because I am absolutely, batshit crazy terrified of being pregnant. Like, ridiculously scared. I’ve never simultaneously wanted and feared something so much in my life.

Last fall, before we found the clinical trial, I was feeling particularly hopeless. One afternoon I convinced myself that visiting a psychic would be the best way to cheer myself up (obviously, right?). The woman who I went to see came highly recommended from several sources, and since the other psychic had been such a comfort for almost two years, I figured I had nothing to lose.

I’m not exaggerating when I say that this woman was approximately 565 years old. I have never met anyone that old, ever. I hope I don’t sound insensitive when I say that I would not have been surprised if she keeled over and died in the middle of the reading. She was that old. She also took two phone calls – loudly, and on speaker phone – during the reading and chicken scratched appointments into her ancient, paper appointment book. Yeah, I was teeny bit skeptical.

She read my cards and gave be a bunch of vague generalizations, as I’d imagine psychics tend to do, such as, “Someone who was in the military says hello” (seriously, is there a single person living who doesn’t have a dead relative who served in the military?) and “Children love you. They really love you.” (Wow…shocking). The longer the session went on without her answering my burning questions, the more agitated I became.

At one point she got very quiet with concentration for a few seconds and eventually said, “There’s a bird in your house. He keeps pecking at food in the corner of the table, near the leg of the table. He just keeps eating it!” She kind of chuckled at this. Finally, she asked if I had any questions and I exasperatedly asked about having kids, trying to keep the quiver out of my voice. She (pretended to?) think about it, then asked if twins ran in my family. She said we would possibly have twins, but not for a couple years. I left with a sense of bitter disappointment.

I did think more about the bird comment though, especially since we have a dog who is named Bird (which she couldn’t have possibly known, of course). He had been going into the dining room for no apparent reason for a few weeks, which was odd because the dogs normally follow us around and we never go in the dining room. I checked and re-checked the table legs, but there was no crusted on food. It just didn’t make sense.

A couple of weeks after the reading, Eric and I were rearranging the dining room. We had been given some really cool vintage pieces from his godmother that we had thrown in there until we figured out how we wanted to use them. While moving a large and cumbersome sideboard that we had placed in front of our little sofa table, we discovered this: 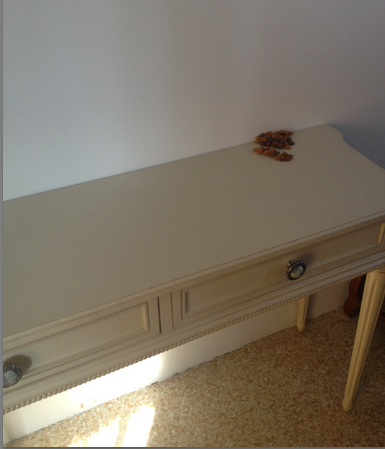 Crazy, right?! She was totally right! Bird (the dog) was nibbling at this random pile of dog food in the corner of the table. Like… whoa. Not that this matters or is relevant to my life in any way, but it proves that she must have some sort of psychic abilities.

If we are “ranking” predictions, I put a lot more credit on the first psychic. Maybe I just choose to believe her because that would mean that this (potential) pregnancy sticks AND that it’s our much-longed-for, absolutely beautiful little girl who we’ve already named (in, like, 2003). The twins comment is interesting, though…either Old Lady Psychic was referring to the twins we lost, or even this next set of twins. I went for the reading in 2012 and they would be due in 2014, so technically that is “a couple years.”

I’m not saying that I believe wholeheartedly in psychic predictions. But then again… I’m not saying I don’t believe them either. Anyone else have experience with all this craziness?

I keep referencing February and psychics, so I figured I would give a little background on that for anyone who doesn’t know the whole story.

Back when we were diagnosed as infertile and when I was riding the emotional roller coaster of not getting pregnant every month, certain things were tough. Baby showers were tough. Kid’s birthday parties were tough. Any event that may or may not feature children was tough. That’s practically everything, by the way. Kids are everywhere and any little thing was likely to set off a sadness bomb inside of me.

As you may imagine, Mother’s Day was a particularly hard day. On that Sunday in 2011, I awoke in a foul mood. I distinctly remember lying in bed at my apartment, delaying the start of my day and wallowing in self pity. I checked my phone, as I always do first thing in the morning, and discovered the following message from my dear friend:

I would like to offer you this small piece of hope on this special day… I went back to the psychic yesterday. The one who did a group reading for me a couple of months ago and left me with goosebumps after reciting my entire life story. This time we were alone and I asked her about you and Eric. I told her I had friends who are having trouble conceiving. She asked me for your first name only and paused for a while. She said she definitely sees you getting pregnant and the pregnancy surrounds something with a 2. She thinks the 2 is for February. She said to give you 2 pieces of advice. One, be patient because IT WILL HAPPEN, and 2 continue using those fertility sticks. The second they show you’re ovulating you need to find Eric and go to town!
I know it doesn’t take a psychic to know fertility sticks help people conceive, but the specifics of info this women gives about everything else tells me she certainly knows her stuff.
Also, she said sees a beautiful baby girl. (I loved that part because she said it so full of emotion.)
I hope you have a Happy Mothers day, because you are a mommy, even if your baby hasn’t arrived yet.

Ok, let me premise with this: I didn’t know if I believed in psychics. It certainly never occured to me that I should go to one for this issue. And given the choice, I’m not sure I would want to know. What if the psychic said I would never have kids? How could I live with that every day, true or untrue? So this scenario was perfect. I had not asked my friend to ask for me, so I wasn’t worried about getting an answer. Plus, the answer was so full of hope on a day that I desperately needed it.

Remember, this was May. I manipulated that psychic prediction every way I possibly could all year long to fit my needs at the time and justify a pregnancy. In late May and June, I said the baby would be due in February. In the summer, I said the baby could be premature. In the winter, I said February would be the month we found out the gender. So no, I did not sit by patiently waiting for February to arrive.

February 2012 was a fantastically stressful month. It was, not coincidentally, the time of my first panic attack. I was driving home from work and had to pull over because I got myself so worked up that I could not breathe. To say that I had become obsessed with the prediction would be an understatement. I spoke to people about it as though it was a fact, not a prediction. The friend who sent the message was probably ready to disown me. I begged her for more details, nuances, anything she may have left out. She’s probably happy to live 300 miles away or I would have been at her house every night dissecting something that may have been literal, symbolic, or who knows, may have just been a big hoax.

February came and went. We did not get pregnant. It was almost a relief to have it over with, even if relief was quickly replaced with despair. I went through the rest of 2012 with a lack of enthusiasm compared to the year before. I don’t know if I believed it anymore.

As soon as we got our appointment with New Hope last year, I began thinking about February again. I started getting really excited. Without trying, all of the scheduling lined up for February of this year. Our first tentative embryo transfer (ET) was supposed to be Feb 1, but with my high estrogen was delayed to Feb 24-27. It’s still February. It’s still all about February.

I’m definitely less worked up and anxious than I was last year at this time. This is our first real, honest-to-goodness try, and that’s incredible. But tell someone you’re undergoing IVF and they’ll tell you about their friend’s neighbors cousin who tried 5 times or 6 times or 12 times and was unsuccessful. It rarely works on the first round; I know that. But I do have my determination, my hope, and a very promising psychic prediction on my side. Take THAT, universe!