– At my last OB/GYN appointment I scheduled all of the rest of my appointments…for the entire pregnancy. Seriously surreal. 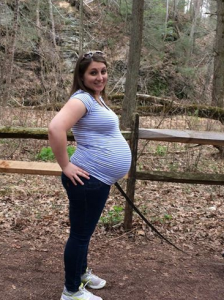 are my arms really that fat?

– Over the weekend I went on a hike (not an intense uphill climb, mind you, but a moderately difficult walk in the woods that a 3-year-old could easily complete) and had to spend half a day recovering from it.

– Exhaustion has hit – big time. My naps even need naps. Not that I can take naps, of course. But I fantasize about them every waking (sleepy) minute.

– I’m about 95% sure I have SPD (symphsis pubis dysfunction) also known as PGP (pelvic girdle pain), which is a harmless yet excruciatingly painful condition. I’m usually fine all day long, but once I get into bed at night I feel these intense shooting pains up and down my inner thighs and groin area, sort of like I just did a 6 hour workout without stretching beforehand. It gets so bad that in the middle of the night when I get up to pee, I almost fall over because my legs have totally tensed up. Turning over (a frequent occurrence throughout the night) is excruciating. The constant waves of pain make it hard to sleep. I can’t stand on one leg (which you don’t realize is important until it’s time to put on pants) and getting in and out of the car is harder than it should be. It’s really bad. Anyone else have experience with this at all?

I’m not really sure why I imagine myself exempt from these basic pregnancy realities. It’s hard because I still think of myself as a young, fit, active girl who can complete all her daily activities with little to no modification. But alas, my body protests. If I keep my feet down for any stretch of time longer than an hour, I can literally feel the fluid building up and my ankles and calves becoming rock hard. My best friend in the world these days is my little prop stool at work that allows me to keep my feet up all day long. Without it, I’d be a miserable mess with gigantic elephant feet that don’t fit into shoes. As it is, I’m already flirting with that title. 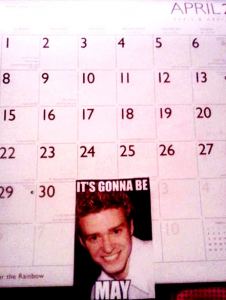 But it’s not all bad. It’s almost May, my favorite month of the year! Time is seriously going to fly soon, which is both good and bad. Good because I want the baby out now (and I anticipate this feeling is just going to multiply by a thousand as the weeks go on) and once May is over, it’s June. Also, May has my birthday, my baby shower, my anniversary, and a few other fun events sprinkled in that I’ve been looking forward to for a while now. March dragged. April took forever. But now there’s light at the end of the tunnel.

Speaking of – the bathroom enjoys slow, but beautiful progress. This was a total gut job, and included everything from complete rewiring to moving walls and doors and plumbing. So yeah, it’s not finished yet… not even close. Thankfully, the shower IS operational, so no more field trips to my parent’s house to bathe. Plus it’s kind of nice when I’m behind the shower curtain because I can imagine my pretty, shiny new bathroom totally complete (that is, until I open the curtain again).

The bathroom, or lack thereof, isn’t stressing me out as much as the hindrance it is making on the nursery project. What was once an empty room is now a catchall for uninstalled sinks, contractor tools, linen closet contents, and at least 200 travel-sized shampoos and body lotions (you should have heard Eric yelling at me when he discovered my stash. Truly, I have an addiction to stealing these from hotels). There’s no way we can paint or set up in that mess, so it would seem that there’s no way to start the nursery until the bathroom is done. And now, heavy (emphasis on HEAVY) with child and frantically realizing that OMG, MAY IS THE MONTH RIGHT BEFORE JUNE, that’s starting to become worrisome. Eric? 100% not concerned. Most people I lament this to? Also, unconcerned. I can’t tell you how many times I’ve heard the phrase, “Oh, you won’t use the nursery for the first few months anyway.” And yes, I KNOW this. I don’t expect her to be sleeping in her crib on our first night home from the hospital. However, tackling painting and setting up and all that stuff with a (cranky? colicky? needy?) newborn strapped to my chest sounds vastly less appealing than tackling it now, when her biggest disruption to my day is a bout of the hiccups. Plus, all of the clothes I’ve gotten so far are piled in a corner, unwashed, unsorted, and decidedly far from organized. I’m sure after the baby shower I’ll have even more stuff to sort. So no, I don’t NEED to have the nursery done before she arrives. But I’d like to. I’d really, really like to.

I’ve gone from envying the baby bumps of complete strangers to envying the anonymous message board posts from the “June Babies Group” on the What to Expect website. Every other post these past few weeks has been all like, “Nursery pics!” and “Check out my nursery!” and “FINALLY putting the finishing touches on the nursery, just need to hang one last picture frame and I’m D-O-N-E!” and it’s making me all bitter and jealous. But then I remember, no, Amanda, please keep yourself gracious and be thankful that you’re having a baby at all. Last year at this time, would I have complained? Over something so silly as not having the nursery done? No. It’s all about perspective. Just a few days ago I was driving home from work and feeling her kicks and all of the sudden I just started sobbing because holy shit, my daughter exists and I get to meet her soon and she’s actually right there in my lap at all times. Yeah. Pregnancy hormones are fun.

What else? Nothing much. Still boring, and glad to be boring. Not that I want anything bad to happen, (duh), but I kind of miss the days of yore when every post would have like 30 comments and we all got to interact and stuff. I miss my blog friends! Now I’m noticing that the unofficial group of girls I’ve been following for over a year now has been posting less and less frequently (with a few exceptions, of course, and to you I say thanks)… a lot of them have had babies, or aren’t doing much fertility-wise, or have disappeared under mysterious circumstances… it makes me sad. And while I haven’t left much room for comments because nothing I say really needs/deserves a reply, still I selfishly want to keep the conversations going. I wonder if anyone is still reading. And to those of you who are, thank you, and please don’t feel like you need to say something just to say it. That’s not what I mean at all. I guess I’m just feeling nostalgic and want to know what’s going on in all of your lives, because hey, blogging makes you slightly voyeuristic whether you like it or not. And to the very, very few people who manage to blog almost every day – I appreciate you, I respect you, and I’m in awe of you. My goal is a post a week and I fail at that most of the time.