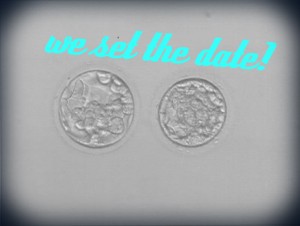 Funny, right? I should sent out cards. The fact that it will only barely still be February is amazing, and of course feels like some kind of sign.

The mornings of monitoring appointments, my alarm goes off at 4 sharp (this morning I did allow myself a no shower day and “slept in” until 5 since I would be working from home for the rest of the day). I rise, assure the dogs that it’s wayyy too early to go out (despite their apparent desperation) and prepare myself for the day. Typically I’m out the door by 5 and on the bus to Manhattan by 5:20. Even when I get to NHFC at 7:15, the waiting room always has at least 15 people ahead of me when I get there. I can’t figure out what time you’d need to arrive to be “first.”

I’ve said it before and I will say it again – I am beyond grateful to have found this place that, for some reason, is giving me practically free IVF. There was a painful and desperate time last year where I would have driven 8 hours daily or even attempted to charter my own private plane for that sort of opportunity. But I’m also human. I’m sick of commuting. The bus is $43.25 round trip and I’ve now made this trip more times than I wish to calculate. I spend two hours on a bus for a 30 minute appointment, rush back to Port Authority, spend two hours shuttling back and then go straight to work. It’s exhausting. I take my laptop on the bus and try to get some stuff done, but the WiFi is sketchy and typing is a real pain in the ass. Plus, you know what? I hate laptop touch pads. They freak me out. I definitely need a mouse at all times.

Today was fun because here we are on day 15 and I didn’t ovulate yet. I even had a real doctor (rather than my favorite no-nonsense tech) do the U/S and he said something about me coming back one more time before they would give me a date. I protested. He conceded and gave me some nasal spray to induce ovulation (wild, right?). Then they said based on the blood work, they would tell me whether I had to come back on Monday or whether my next visit would be the big day. The called me at around 1 and – surprise! – gave me a date, no return visit required. Small victories! We are on for February 28th.

My mother in law is coming with me to the transfer and we’re staying overnight in the city, just for fun and so I can pretend to be relaxing. I’m actually very excited about that part. For some reason I have 40 hours of unused vacation time that expires in March, so I’m planning on taking two days. Don’t think I’m some crazy workaholic; my company just gives a lot of PTO and I never take sick days. This mini vacay is going to be a nice way to take it easy, and yeah, not be rushing to catch the next bus out when I should be laying down flat with my legs up saying every prayer I know.

Eric is undecided if he’s coming, which my mother thinks is a hilarious concept. I pointed out that he was there for the conception, just not for the implantation, and theoretically he wouldn’t be around for that anyway. But yeah, it’s weird. He wants to come but he does not have 40 hours of unused vacation time and he’s not a fan of New York. That’s why I chose not to remind him that technically, his children are New Yorkers and have lived there for their entire lives so far. I find that pretty awesome. Maybe they’ll give me fashion tips.