Up until yesterday, I might have considered myself the queen of injections. I’ve gotten cocky with it…I went from a girl who got queasy even looking at needles and who almost passed out giving blood far more times than I care to mention to someone who is nonchalant about the whole thing. I’ve certainly come a long way in a short time. I still can’t look when they draw my blood, but it doesn’t phase me one bit to roll up my sleeve and offer up a vein. I’m a pro.

But first I should tell this story, because for the first time ever my insurance did come through for me. My friend has a clotting disorder and once had to be on Lovenox. I was chatting with her about my situation and she warned that the first time she went to get the script filled, they wanted to charge her $800. She got her doctor to deem it medically necessary, and that dropped the cost down to $100. Even Dr. L mentioned that it was an “expensive” solution. So I was prepared for a ridiculous price.

I stopped by the pharmacy to pick up my Estrace refill and just for fun, I asked the pharmacist how much it would cost to fill my Lovenox script. I even joked that it would “probably be, like, a billion dollars.” But after she typed in a few things, she looked me right in the eyes and said, “$10.”

$10? TEN DOLLARS? I made her check several times to make sure she didn’t mess up. And lo and behold, it was true! Hooray for this new crappy insurance, for the first time ever the news was good! Plus, the syringes are pre-filled and spring loaded. The pharmacist made them sound like fun! Woo!

But then it wasn’t good. Because the next day, after my nightly PIO shot, Eric said, “Flip over!” and did the Lovenox shot in the belly. Well… HOLY SHIT. I am not an injection queen. I am not an expert shot taker. I am a sniveling, crying little baby. Because that. shit. hurts. It burns! It burns going in and for at least 15 minutes afterwards. It burns, it hurts, it stings, IT SUCKS. The injection site is sore a full 24 hours later. When I was lying in bed later last night, I could almost feel my blood rushing weirdly through my body. (strange side effect, or the power of suggestion? hmmmm…)

And the worst part is, it’s not even guaranteed to help. I did get the results back from the clotting disorder tests, but I don’t know how to read them and my doctor hasn’t had a chance to go over them yet. Even if I don’t have anything that came up abnormal, I’m thinking New Hope wants me to keep doing the shots anyway as a precaution. But honestly…it’s so awful. The thought of doing it for the next 3 months or (God forbid) 9 month is simply horrifying. I would, of course, but I don’t want to. I don’t want to!

Sorry, bitch ‘n’ moan fest over. I truly hope none of you have to take this horrible shot. And for all concerned parties, I went to the chiropractor on Monday and firmly explained my $0 offer. He said he was willing to negotiate, but would not do it for free. So I got one last gratis adjustment and breezed on out of there, promising to come back… eventually. It was fun while it lasted, I guess.

Sorry to dash, but I must go mentally prepare for The Cruelest Injection Ever Invented. This kid better be grateful.

Even though it wasn’t quite the circus that it was last time, I did get a bunch of sweet messages: 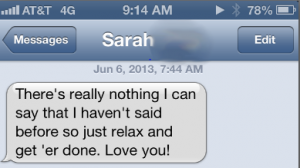 Here’s the text I sent my sister: 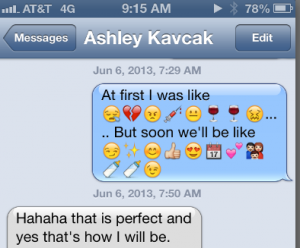 On the bus ride into the city, I got inspired by The Berry’s Morning Coffee post: 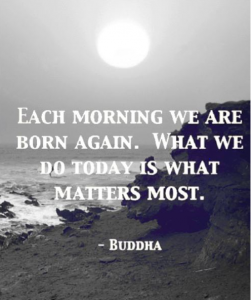 After I got off the train I rode the escalator up to street level. While Coldplay’s Paradise serenaded my eardrums, I noticed a woman with the telltale inner elbow medical tape bandage proving she had just come from a New Hope monitoring appointment. Immediately behind her was a very pregnant woman. Together we formed the past, the present and the future. Maybe it was the Coldplay influence, but I swear, in that moment it felt like all was right in the universe. 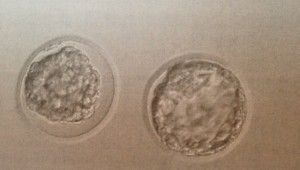 Here’s the wittiness you missed because you didn’t “like” my Beloved Burnt Toast Facebook Fan Page yet: 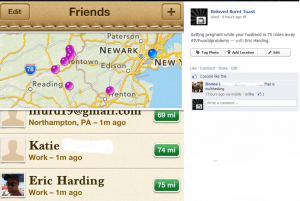 The transfer went fine, as I knew it would. This was my first time talking to Dr. L since the day which shall not be mentioned, and she had a lot to say. Specifically, she made me reiterate over and over that the tissue results from the D&C had been normal. She was shocked about this. Could not believe it (what can I say, I’m a medical marvel, apparently). She said, and I quote, “So what are you going to do to keep this from happening again?” JUST LIKE I TOLD YOU SHE WOULD SAY. Like I have control over it or something. I should mention that when she said this, I was already in my cap and gown, legs up, lady parts out, embryos thawed on a little table on the other side of the room, but despite all this I did think for a moment that she was going to stop everything and make me hash out my very own Miscarriage Prevention Plan. Of course, she did not. She did the transfer, then made me wait a freaking hour and a half to speak with her after the procedure. It was just me, sitting there, alone with my thoughts.

Her miraculous solution: baby aspirin daily. I mean… duh. I knew she was going to say that. I also have a prescription for Prednisone, which falls under the “can’t hurt, might help” category of medication. I just looked it up and it’s a immunosuppressant, which makes my heart happy. When she asked for why the pregnancy failed last time, I stuttered out some words about food allergies and she just stood there looking at me like I was insane. She gave no reaction to my ramblings; no acknowledgment, no counter-argument, nothing. It was as if she was watching a crazy person have a bad bout of verbal diarrhea. But the Prednisone script proves that she gave me a little credit, right?

She also mentioned Lovenox, which is a bit controversial and has yet to be a proven remedy against the big MC. Dr. Google says it’s “anticoagulant therapy indicated to help reduce the risk of developing DVT, or deep vein thrombosis,” so we’re back to blood clotting drama again. She said she never liked to prescribe it but desperate women started seeking out other doctors who would, and it’s become a kind of standard in NYC for recurrent losses. I bit my tongue at that – seeing as I’ve only had one loss – but she is using a wait and see approach, because it’s a “giant needle,” is “very expensive” and “is not necessarily covered by insurance.” Oh, goody.

So yeah, I’m officially PUPO (that’s pregnant until proven otherwise). One week ’til the beta!