We have a Golden Retriever.

We also have a Jack Russell/Whippet Mix, but he’s not the main subject of my guilt. I don’t know why; I guess it’s just the way my bizarre little mind works.

So here’s the thing. My parents have grandkids, both a boy and two girls. Eric’s parents also have grandkids, and also have both genders represented. While I’ve always wanted to do my part to provide them with more, I’ve never felt obligated to do it. I never felt pressure from my family to have kids.

The place that I am feeling pressure is with my dog. My dog. Yes, it’s insane. But I managed to pick the most stereotypical kid-friendly dog on the planet, through no fault of my own, and literally every time I look into his big brown eyes I think, “Damn, I wish you had a little kid to play with.”

I take pride in saying that both my dogs were adopted, but let’s be honest…Ryder probably would have found a good home even if I hadn’t gotten to him first. He’s a purebred 5th generation Golden Retriever with the papers to prove it and cost his original family $900. But then the Dad of the family was away a lot and the Mom of the family left Ryder in his crate all day, even though she was home all day, which prompted her neighbors to threaten calling animal control. We found out about Ryder’s situation via a forwarded email and took him home two days later.

That’s when the guilt trip started, I think. He was 7 months old and had spent most of his life with this family of three kids. I felt terrible when the little 5-year-old cried as I loaded him into our car, but it wasn’t my fault. I was saving him from her asshole mother who couldn’t be bothered to treat him like part of the family. We took him home and he seemed to like it there, but then we had to go to work. We left him alone for 8 hours a day, 5 days a week. We felt awful. We quickly decided that he needed a buddy, and that’s when we adopted Bird.

Ryder and Bird are best buddies, probably out of necessity, but nevertheless it’s better for my anxiety to know they’re hanging out at home together while I’m stuck at work all day. But still. I feel so incredibly guilty that I haven’t blessed them with a baby yet. Both of them, really. Because Bird would love playing with kids, too.

Guilt – is it ingrained in me somehow? I feel guilty when I leave them in the morning, guilty when I get home and I’m too tired to walk them, guilty when they shower me with love and affection that I don’t feel worthy of. Guilty that I can’t give them what they so clearly need. Then I think, hey now, there are dogs out there in the world who are abused and neglected who would kill to have the charmed life that our dogs have, all clean and fed and coddled in a nice warm house. That’s true. But I feel like I owe them more than just the bare necessities. 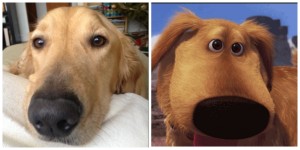 You wanna know what Ryder is like? Picture the dog from the movie “Up.” The one who says, “Hi, I just met you, but I love you.” He’s a big, dopey oaf who thinks he’s a lapdog even though he weighs 80 lbs. He’s afraid of everything – we have a jug style water dish for the dogs that he refuses to drink out of because one time it made a loud GLUG GLUG noise. He once spent hours “trapped” in the kitchen because our little recycling bin had gotten knocked over in the doorway and he was too terrified to go near it. And don’t even get me started on the vacuum.

The fact of the matter is that he’s stupid. He’s stupid, he’s inbred, he’s easily frightened and he’s also the most gentle, sweetest soul you’ll ever meet. I literally think about his mortality on a daily basis, and wonder how the heck I’m going to survive it when he passes. And then I think, I’m really running out of time here. He’s only 2 and a half; he’s young and energetic and at the perfect age to play with a toddler. What if I don’t have kids until he’s old and feeble? It’s not fair to them, and it’s not fair to him. I feel like I’m depriving him, and also am depriving those future unborn kids who should really get to meet my Ryder at his best.

And his breed was part of the reason I knew he was perfect. We knew we wanted kids, so a Golden made so much sense. It’s not like you ever hear about children “being attacked by that vicious golden retriever.” That’s not to say that other breeds aren’t great with kids, too…I am 100% pro Pit Bull (as Eric likes to point out, they are the original nanny dog), but I never had dogs before. Goldens are so simple and easy to train. They’re a great starter dog for someone who has no idea what they’re doing. They are the breed that you choose when you have/want kids and you don’t want to worry for one second that it was a bad decision. For this reason, it seems like they belong with kids. And then I take it one step further and think I owe the dog some kids.

This weekend we went camping. The campground had a dog park that we spent a lot of time in, and let me tell you it was awesome. Oh! If you want to hang out with people who aren’t obsessed with kids, go to a dog park. This one woman was practically spitting nails at the little kids from across the street who wandered over to see the dogs from the other side of the fence. Another person threatened to leave if kids came in. I know it doesn’t always hold true, but a lot of times dog people are decidedly not kid people. No one asked me if I had kids or when I planned to have them, that’s for darn sure. They just talked about dog this and dog that for hours on end. It was actually nice.

So anyway. We were at the dog park when an adorable little redheaded girl of about 2 toddled over and started petting Ryder through the chain link. His tail was wagging furiously as he tried to get closer and closer to her chubby little hand. I’m not gonna lie… this scene caused tears to prickle behind my eyes as a million metaphors raced through my mind. There’s a giant fence between him and that little kid he’s supposed to play with. It’s a fence called infertility, miscarriage and injustice. It’s a fence I’m trying to climb with all my might, but I just keep falling down on the wrong side of it. It looks so easy, but it’s just so hard.

Doggy guilt trip. Am I crazy?

I have always known that I wanted children, and here is one of the reasons why.

I grew up in a loud house. There was always someone yelling, lots of commotion, and lots of noise in general. I was one of three (for a long time, until I was one of five), but I would argue that my brother Eric counts for two or even three in terms of noise-making abilities.

Holidays were even crazier, typical Italian drama-fests with an entire extended family crammed into tight quarters. I loved it. That is what spoke to my heart. It felt comfortable, it felt safe, it just felt like home.

One of the first things I loved about Eric was his big, loud family. I immediately felt like I belonged there, because it felt just like my family gatherings. One of my great joys in life is our weekly Sunday dinner at his parent’s house, a cacophony of kids and grandkids and spouses.

Naturally, I imagined a noisy house of my own, filled with the harmonious sounds of kids and dogs and happiness. Of course, I treasure silence at times, but I like it as an unexpected surprise, not a normal state of being. This morning is so quiet here that you can hear the fish tank filter humming. Sometimes we keep a TV on to drown out the silence, but sometimes we don’t. And in those moments of quiet it can be so lonely.

The silence felt oppressive when there was no solution in sight. Now that we hopefully have one, it feels like the quiet before the storm. It’s a quiet anticipation. It’s like we’re collectively holding our breath, waiting for the next moment, waiting for the noise to finally come into our house. I like when things are clean and orderly, but once the laundry is done and the dishes are done and the vacuuming is done it’s a little bit sad. I definitely feel a sense of “Now what?” I mean, it’s obvious that I’m lacking a purpose. But it’s not so much lacking as it is having a purpose that’s unfilled for right now.