Today was the last of my weekly ultrasounds, and the last time I’ll have to deal with New Hope… ever (when we have our next baby, you can bet your bottom dollar I’m not going all the way to New York to do it. But that’s another conversation for another time). Baby is right on schedule, measuring 8w5d, heartbeat 154 (I had a moment of panic that it’s lower than last week, but the tech pooh poohed my concerns and said it fluctuates a lot during this time). Major milestones: well, no transvaginal ultrasound wand, for starters. This was all done over the belly like a regular pregnant person. The tech even started chatting with me about baby names. Like, wait, I actually get a baby at the end of this? I have to name him/her something other than Baby Crumb?

I almost want to write a letter to the hospital raving about the service I’ve received at their lab. Every tech has been so nice, so understanding, so compassionate. When I mentioned my concerns to the woman today, she quickly scanned and found the heartbeat to reassure me, then went on with her other measurements. Meanwhile, I don’t think she’s even supposed to be telling me details. I’m almost sad to stop going there (and yeah, I’m realllly going to miss these weekly reassurances).

What else? I’m not nauseated anymore. Of course this was cause for concern these past two weeks, but I figure I’m also not coughing/sneezing/sore throat sick and I am still experiencing food aversions pretty hardcore. I made Coconut Curry Stir Fry the other night, thinking that if the chicken was all mixed in and hidden it would be ok… ah, no. Big chunks of chicken = Amanda wants to gag. I’m still subsisting on a handful of different foods that I just constantly rotate. Split pea soup, daily. Rice Chex with almond milk, daily. Rice noodles with organic tomato sauce, daily. Gluten free cookies, multiple times per day.

Oooh and speaking of gluten free… I went on a bit of a baking/cooking kick this weekend, and made a gigantic batch of split pea soup (seriously, my favorite thing ever) and a bunch of different GF cookies. I want to share the one recipe with you because even if you aren’t GF, these are SO EASY and SO YUMMY. Generally I base my recipes on number/obscurity of ingredients (if it requires essence of unicorn horn or anything similar that I can’t find at my local grocer, forget it). Best part about these bad boys is that I literally had all the ingredients on hand (um, that never happens). So here they are: easiest, awesomest peanut butter cookies ever.

Mix all that crap together. Mix it real good. It’ll be goopy and gloppy, but who cares? It’s gluten-free, bitches! Drop it onto a parchment paper lined cookie sheet and try to do the criss cross fork thing. It won’t be perfect (see above: goopy, gloppy mess), but it’s the thought that counts. Sprinkle with sea salt. Bake for 10 minutes. THAT’s IT. Wasn’t that easy??

When the hell did this turn into a recipe blog? God, I’m sorry. We were talking about Baby Crumb. So anyway, I’m not nauseated, I love cookies, not much else to report except one thing. Bump. Yes. I have one, and I’m not even 9 weeks yet.

Here’s the story. I’m a strictly pear-shaped woman, and whenever I gain, it’s all ass/hips/thighs. This past year when I gained a bajillion pounds with all this medication and stress eating, I did notice some extra jiggle in my arms and my knee-high boots don’t zip over my calves as well, but still, my stomach remained pretty flat (and also, ahem, my chest). Well, not anymore. Since going totally gluten-free two months ago, I actually lost ten pounds. BUT, my stomach is protruding more than it ever has before. So I think that qualifies as a very early bump.

Besides that, my knockers are huge (well, for me they are). So despite my lack of nausea or any other real symptoms besides aversions, every morning I wake up with this oversized belly and chest, I feel a little thrill of excitement, like whoa yeah, this might actually be happening. I have physical evidence to prove it. Eric gleefully calls me “fat” on a daily basis (because…he can?)

Speaking of the hubs, he’s still not allowing himself any real excitement until we hit 12 weeks. Oh and how’s this for exciting: he’s actually going to get to come to an ultrasound appointment! Three pregnancies, and this will be his very first! Our first ultrasound with my regular OB/GYN will be on November 25th, which also happens to be his birthday. Ballsy, or smart to schedule it that day? I figure nothing can go wrong because that would just be TOO cruel. I’m happy to share it with him. I’m also planning to buy a bottle of bubbly and pop the cork when we hit that elusive 12 week milestone (plus he said I’m allowed to have a sip once we hit 2nd trimester. Thanks, dear). And because I’m a total crazy pants, I already drafted what the Facebook announcement will say. Yes. I planned this. I also daydream about my baby shower, and the birth, and the afterwards part when I get to hold my baby in my arms. You might say I’m fully invested in this.

This is the most pregnant I’ve ever been. I graduated from New Hope. I graduated to regular, external ultrasounds. My cup(s) and waistline overfloweth. 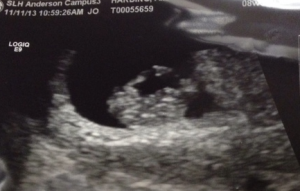