I made it to 40 weeks, woo hoo! Baby boy just has to stay in there 4 more days for me to get the good maternity leave. The closer we get to the 24th, the more I believe it’s actually possible.

I had my last OB appointment this morning and I’m still 1cm dilated, now 70% effaced. At my appointment we discussed all my options. Over the past few days I’ve spent a good amount of time on Google (bad idea) and read horror stories about being induced along with horror stories about waiting. All of it is very confusing and stressful and really the only consensus seems to be that going into labor naturally is best for mother and baby, which I do believe, but also cannot control.

1) My preferred doctor will be in the hospital all day Friday and will be able to keep a close eye on me
2) I had a few placental issues last time – the abruption and possibly IUGR (which would explain her low birth weight). If he stays in, could these things happen again?
3) I’d like to meet him
4) I made plans for 12/6 that can’t be changed. I know that’s insane/probably selfish but it didn’t even occur to me I’d still be pregnant!

Yeah so for these reasons I did go ahead and schedule the induction for next Friday, 11/27. Of course my sincere hope is that I go into labor naturally before then, but if I don’t, that will be the day. Part of me feels very guilty for not going crunchy/natural and waiting until the absolute end of the end week 42, but another part of me is relieved to have an end date.

By this day next week, I’ll be holding my son in my arms.

I remember when they first told me my due date, it seemed so far away. June 18th? 2014? I remember thinking, “How will I ever make it to that day?” Well, now that day is here, and I’m both overly prepared and not ready in the least.

Funny story though: as much as we were fixated on this day for the past 9 months, it may not be entirely accurate. At one of my perinatal appointments, a doctor made the offhand comment that it was weird they were using my LMP to calculate due date since I was an IVF patient. I guess I just never questioned how it was being determined. The due date of 6/18 comes from my 9/11 LMP, but when I went online and found a special IVF pregnancy due date calculator and put in the 5-day blast transfer date of 9/28, it came out with a due date of 6/16. Which means she’s been late since Monday. Whatever. Either way she’s not here yet and there’s not much I can do about it.

Several times a day I try to wrap my head around the fact that I’m about to meet my daughter, and that my life will never be the same again. Yes, I’m feeling impatient, but I’m also feeling so overwhelmed with emotion that it takes my breath away. And yes, I can wait a few more days. No matter what, she is on her way. She will be here by Monday at the absolute latest. That is INSANE.

For someone freaking out over not being ready a couple weeks ago, now I think I’m way too ready, and it’s making me do strange and obsessive things. For example: we have two dogs, one of whom is a serious shedder. Not the Golden Retriever with the long, luscious blonde coat – oh, no. The culprit here is the little mutt with the short, wiry white hairs that fall out constantly and stick to everything. The couch. Our clothes. The rug. Everything. Everywhere. Usually dog hair bothers me in an offhand way, and I vacuum once a week (or even stretch it to 10 days), but for some reason it has become the bane of my existence as of late. Like, I’ve been vacuuming DAILY (unheard of). Eric is convinced I’ve lost my mind, and maybe that’s true. Last night, about 20 minutes after my nightly vacuuming session, I took it one step further. He was in the kitchen when this interaction transpired.

Eric: “AMANDA! what are you doing in there?”

(from the living room): SQUEAK! SQUEAK!

Eric: “I swear to God, if you are lint rolling the couch…”

This is my life, folks. 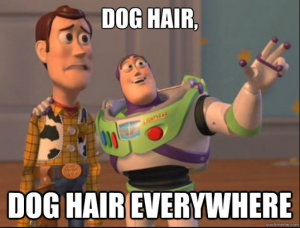 I’m half tempted to just shave the damn dog. The Furminator does a great job getting rid of the undercoat, but even daily brushing does nothing to reduce the endless piles of hair. I get inexplicably angry when I see Eric’s black athletic shorts and black hat covered in little white hairs. The couch is dark green, so the hair stands out offensively. And I don’t know, at this moment the thought of bringing my baby home into a den of dog hair is just yucky, and furthermore, inexcusable. I cannot abide it.

I THINK that my brain is picking a problem of a manageable size (dog hair) and focusing on that, rather than dealing with the real issue at hand, which is so huge that it really can’t be conceptualized (a baby is coming. A real, live, human person is coming to live with us forever. Also, that person is going to painfully extract herself from my body).

But also, the dog hair is gross.

I need more lint rollers. Preferably ones that don’t squeak so I can indulge my secret obsessions privately.

More likely than not, this will be my last post before THE POST. So, the next time I check in, I don’t think I’ll be worrying too much about dog hair anymore. Or maybe I will. I have no idea. I’m freaking out.