“Coming in late tomorrow because I have to take my chicken to the vet. I realize how ridiculous that sentence is.”

That was the exact text I sent to my boss on Monday night. You may be thinking, “Chicken? Vet? What?” and you would be entirely justified. Here is the story.

Some of you may recall that in our quest to remain rural in an increasingly suburban setting, we keep chickens. It’s a fun fact to share with people, and the eggs really do taste better. Anyway. Our chicks from this Easter grew up beautifully in their cardboard box before graduating to the small coop in the basement. Any day now they’ll be ready to join the lone chicken from last year, Gloria, outside in the brand new fancy coop. All the chickens, that is, except one.

This is the part where I admit that I don’t have much involvement in the care and feeding of the chicks. And by not much, I mean basically none. Eric does the whole morning routine and takes the dogs out, feeds and waters the chickens, makes the coffee, etc. while I stay in bed for as long as humanly possible. My justification for this is that he’s the one who wanted chickens/dogs, not me. But I digress.

I was aware that we had six chicks and I vaguely remember him saying something about a “chick with a hurt leg.” Here I will admit that I mostly pay attention, but sometimes do not necessarily hear important details. Fast forward to last week.

I was down in the basement doing laundry and for whatever reason, I happened to glance over at the coop. I counted five chickens intently watching me load the washing machine. I was confused. Did a chicken die? Did he not tell me? I walked over to that side of the room and noticed their first home, a large cardboard box, was still set up beside the other coop. Inside that cardboard box was a chicken with a pathetically twisted dead leg, flapping around pitifully in the wood chips.

That’s when the whole “chicken with the hurt leg” comment came back to me. I immediately found Eric and demanded he explain about the hurt chicken in the cardboard box animal hospital. He confirmed that the chick did walk normally at first, but something must have happened because over the course of the last few weeks, he had developed a serious chicken leg injury. He was separated out to prevent further damage to his bum leg.

This is a good time to point out that Eric and I deal with problems differently, a fact that has spurred more than a few good-natured arguments. He tends to let things go for long periods of time, whereas I prefer to solve problems the absolute same hour that I become aware of them. I can’t claim that my method is necessarily better. His solutions to things such as how to lay out a picture collage focal wall and how to reorganize the basement are infinitely more well thought out and elegant than my slipshod quick fixes. However, when I saw the deformed chicken, I wanted to help him, like, yesterday. It turns out that Eric had talked to some person at work with a farm who assured him this problem could potentially fix itself if the chicken was kept quarantined. But the waiting so far had not helped.

My next point – our vet is expensive (as I’m sure most vets are). The little postcards kindly reminding us that both dogs were due for all kinds of shots were piling up, yet we couldn’t bring ourselves to drop a few hundred dollars on a shitload of vaccines. Besides, we were too busy spending money on injectables for me. And lest you worry that we are bad dog parents, we ended up taking the pups to a low cost vaccination clinic over the weekend and paying about 1/6 of what our vet charges for the very same shots. We’re thrifty like that.

So if we were hesitant to take our dogs to the vet due to the cost, you can see why taking our male chicken to the vet was low on the priority list, never mind the fact that Eric’s farm-savvy coworker suggested the problem could be fixed by waiting. In theory, I probably agreed with all of this. But agreeing with something in theory and literally watching a poor animal suffer are two different things entirely. Also, we dubbed the chicken “Toast” since he was so very pathetic, which managed to make me feel even worse about the whole thing. (Catch up on the story of burnt toast here.)

Maybe things would have continued that way for a while longer, despite how uncomfortable it made me, had it not been for the second leg injury. At some point this week, I peeked into the box and realized that Toast had somehow injured his only good leg. Now he was literally crawling on the floor with both legs bent into grotesque yoga-looking poses, chicken ankle wrapped around neck and still flapping around in the most heartbreaking fashion that you can possibly imagine. Whatever you’re picturing, multiply it by 1,000. It actually brought me to tears.

That’s when I decided I’d had enough. It was time for a mercy kill. If Eric wouldn’t let me pay for the vet, then at the very least I could put poor Toast out of his misery. I worked up the courage and the moment Eric got home from work on Monday night, I pled my case:

This went on for a little while. Finally he stopped, looked at me, and gave in.

The vet’s office was still open when I called. They asked the name, age, breed and gender of the chicken, and shockingly I had answers for each question. (“His name is Toast?” asked the receptionist skeptically. “Yes, Toast.”). The receptionist also apologized that the only vet in their office who treated chickens was not in that evening. She asked if I wanted to be referred to another chicken-servicing vet, or if I could wait until morning. Way too ashamed to admit how long Toast had been in distress, I pretended to wrestle with the decision before confirming I could wait a few hours. That’s when I sent that text to my boss.

The next morning I arrived at the vet with Toast flapping around loudly in a box. We were ushered back into a room, where the vet took one look at him and said he appeared to be the victim of a common yet incurable chicken birth defect known as slipped tendons. As he grew, his little tendons did not fuse properly, leaving him with twisted up legs that would never carry his weight. She also said that his was one of the worst cases she had ever seen.

Not that we would have opted for surgery necessarily, but in this case there was no surgery available. The only way to help poor Toast was to euthanize him with dignity. Even though this was a chicken, even though I figured that would be the outcome and even though I had only known him a few short weeks, I totally broke down. I kept apologizing for crying – over a chicken – but the vet seemed sympathetic. She offered me a box of tissues and asked if I wanted to say goodbye and if I would like to be with him in his final moments.

And that’s how I ended up paying $200 to euthanize a young rooster named Toast. 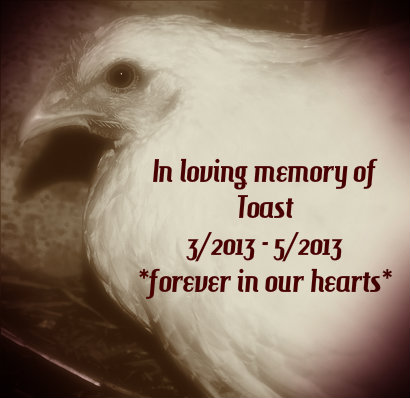