The bathroom is finished!

It’s been finished for a little while now, but I’ve been a lazy blogger. I’m also easily overwhelmed, easily winded, and I cry at the drop of a hat. But despite all of this, I’m pretty excited about my new bathroom.

First, a quick reminder of the “before:” 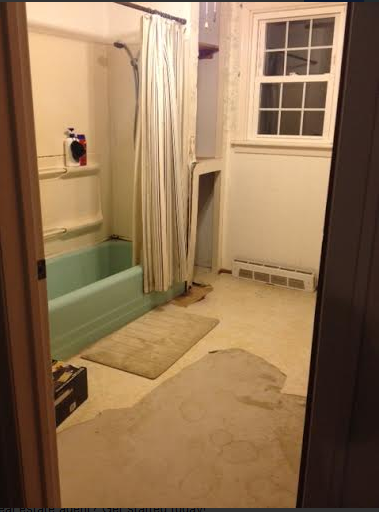 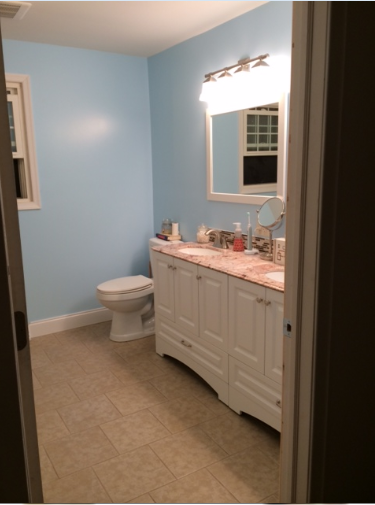 Yayyy! There are still a few things to finish (of course). We need towel bars, a tp holder, some art, shelves, a clock… just a bunch of annoying little things. Plus the trim and the doors need to be painted. But, the majority of the work is done, it’s fully functional, and I’m not brushing my teeth in the kitchen sink anymore. I call that a win. 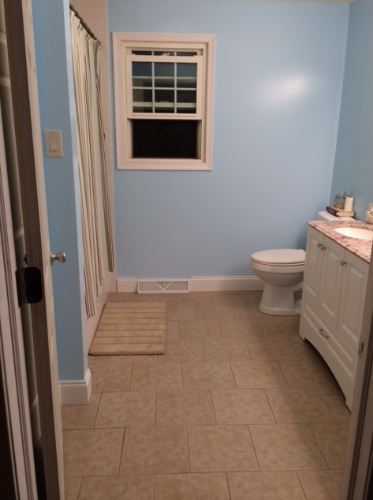 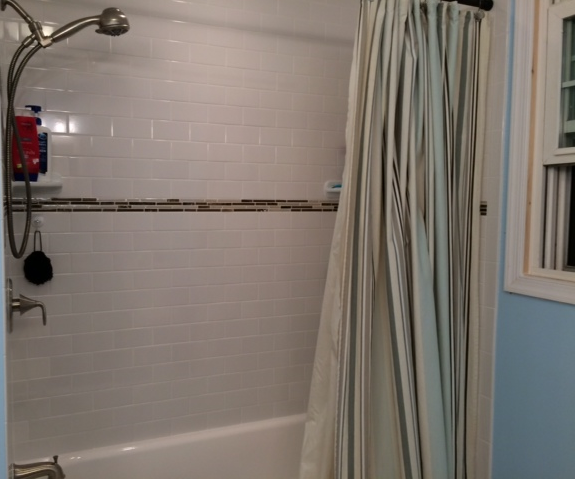 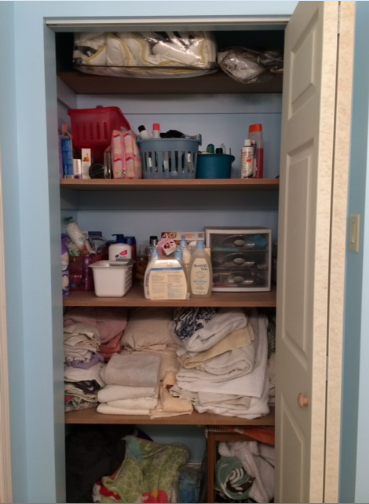 And this I’m really proud of. We found two single vanities on clearance at Home Depot and had a friend seal them together. Want to know how much they cost? $150 each – for the vanities, the countertops, AND the sinks. The full priced versions of the same brand, similar styles were $350 and up… each! So we scored a custom double vanity for $300, all in. That’s my savvy shopping moment of the year, for sure.

Love my vanity most of all: 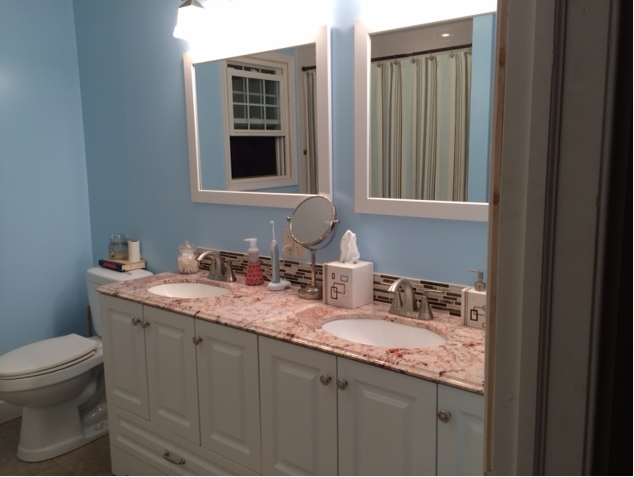 And before you even ask the burning question…

Yes, as of yesterday, the nursery is painted! 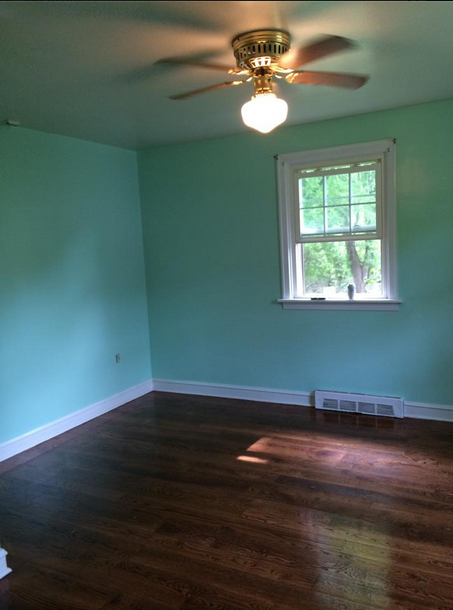 On the eve of 37 weeks, I have a (mostly) empty painted room. I told you we’d be cutting it close, didn’t I? Hopefully a post in the near future will announce the news that the nursery is done, and hopefully that post will precede the one that says, “She’s here!”

But hey, only time will tell.

Eric is brilliant. He figured out a way to totally distract me from the fact that the nursery is no closer to being done than it was a month ago. (OK, so we bought the paint for it. Did we crack it open? No. But we do have it).

I know! Some of you may recall this post, in which I went into detail about just how miserable my bathroom is, with photographic evidence. But in case you don’t feel like clicking through again, here is a reminder: 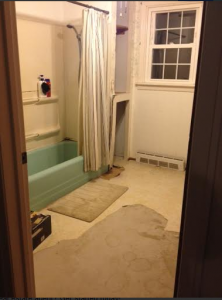 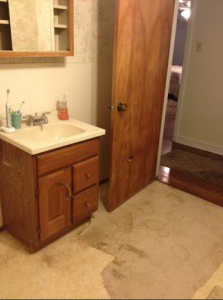 Yes. I’ve seriously been living with this hideousness for three years now. And finally… oh, finally… it is getting gutted. Down to the studs. We got an amazing, one-day-only deal on tile for the floor, plus we scored two gor-ge-ous vanities (to push together and turn into a double) for a STEAL. I am really excited about them, but I’m holding back on sharing any photos because I want the big reveal at the end to be super dramatic. Considering where we’re starting out, I suppose it’s almost impossible that it won’t be.

Eric’s cousin just moved back to the area from Colorado and does construction type work, so that’s who will be tackling this project. Eric has been promising me this reno for a long time (like, since he found out his cousin was moving back to PA), but you know… I was skeptical. Now that some of the materials are purchased and the room is emptied, I can finally believe that it’s actually a reality. And just in time. Because clearly I wasn’t going to be bathing my child in that monstrosity of a bathtub.

We do have a second “bathroom” in the basement, but I use the term bathroom very loosely. Basically there’s a functioning toilet, a decrepit sink, and an unusable shower area, all with some plywood propped up around it (and a handwritten sign that says “DUNGEON” that’s been there since we bought the house. It’s fitting, so we left it up). Eric’s initial suggestion was to renovate that bathroom first, then tackle the upstairs, but I didn’t think it made much sense since the rest of the basement isn’t finished. So essentially we’d have a really nice, out-of-place bathroom in a dark and dingy basement. Our money is much better spent on the main floor.

Soooo we don’t really have a bathroom for the next month… I mean, we have the scary toilet in the DUNGEON (which I’m super psyched about using twice in the middle of the night, by the way). But as for morning routine teeth brushing and stuff, it’s gonna be all kitchen sink for approximately the next month. 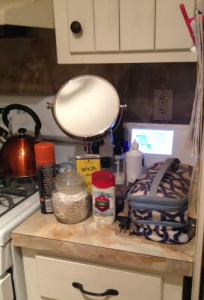 And showering? We’ll be doing that at my parent’s house, which is conveniently located two miles away and has an abundance of extra bathrooms, but still. It’s going to be a pain schlepping over there every single day. Will we get up super early? Or will we start showering at night? My hair is oily…I’m not really sure night showering is an option. I may have to try out that dry shampoo I keep hearing so much about.

BUT, I’m not complaining from this point forward, because I’m BEYOND excited that this bathroom is getting done. I mean, seriously, I’m over the moon.

Next up – nursery. For real. 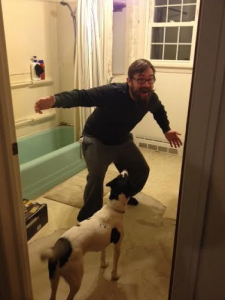 so excited, and we just can’t hide it