For those of you who missed my last little photo update and my multiple social media posts – it’s a boy! Whoa. Color me surprised.

It’s not just that I can’t picture having a boy – it’s that Eric wanted one so badly that I was convinced there was no way he was going to get his way (I don’t know why, that’s just how my brain works). As for me, I really didn’t care either way – all I ever wanted was to have one daughter, and after that, I’d be just as happy to have ten boys. Well, not really. You know.

The other day I was listening to the radio and they were discussing families with a whole lot of just one gender. People were calling in describing their situations – 6 girls, 7 boys, etc. Then one gentleman called in and said his grandfather, who was born in 1900, was one of 13 BOYS. 13! What are the odds of that happening?!

I’m happy, of course, but it also took a few days to wrap my head around it. I’m having a son. We were both so convinced it was a girl that we spent a fair amount of time debating our girl name, and finally settling on one.

As for a boy name… if Molly would have been a boy, we would have gone with Teagan, which is a name that I still absolutely love. However, a family friend who we see quite often just had a baby girl a few weeks ago and named her Teagan. At first we were like, whatever, we’ll just use it anyway. But now that it’s been confirmed that it’s actually a boy in there, we (especially Eric) are having second thoughts about sticking with Teagan. It will be confusing, and they’ll be the same age, basically. I don’t know. The only other name we agree on is like one of the most popular names in America right now, and you all know how I feel about that! I’m hoping some sort of naming epiphany will happen between now and November. Too bad I get my best ideas after a few glasses of wine… that’s something that won’t be happening anytime soon.

I should have known it was a boy. For one thing, he is much more active than Molly was at this stage – lots of movement going on in there. Also, I crave eggs and meat, not really sweets. And perhaps on a related note, even though I’m definitely eating more, I haven’t gained nearly as much as I did last time at this point (only 10 pounds so far at 22 weeks), and I’m not gaining all over my body like before either. It’s all belly.

In other news, next Friday we FINALLY leave for our annual family beach vacation. It seriously feels like we’ve been counting down to this for a million years, it’s all we’ve talked about for months now. I don’t know why we need a vacation so badly this year, all I know is that it’s probably going to be extra brutal to come home from it. I am beyond excited that Molly will actually get to have fun this year, as opposed to last year when she just laid in her chair and traumatically got sand kicked in her face.

Molly… oh, I love that girl. She is now a very sturdy stander, even without holding onto anything, but she staunchly refuses to take that first step. As my sister correctly pointed out, she won’t do anything until she is absolutely sure of herself. So true. So she’ll stand there clapping and smiling, clearly proud of her standing ability, but even when I discreetly scootch away and reach out my arms, she lowers back down to crawl mode before coming towards me.

I’m trying to figure out if all the “Mama” and “Dada” counted as first words, or if her first word is actually, “mouth.” She is still obsessed with pointing to her mouth, my mouth, and everyone else’s mouth and saying, “Mow.” All of the other body parts – nose, knees, ears, all of them – are completely uninteresting, but as for mouth, she’s all about it. Maybe it’s because she loves to eat so much?

Ok, guess that’s all for now. Gotta go work on my vacation packing list! Here’s a few summer snapshots to tide you over until my obligatory beach recap post: 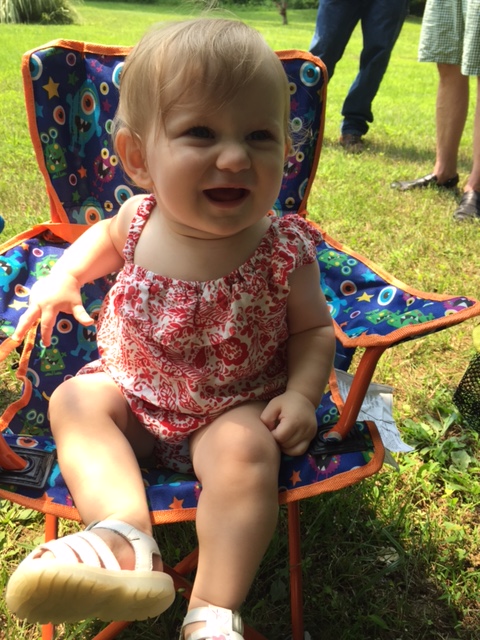 summer is for parties – and rompers! 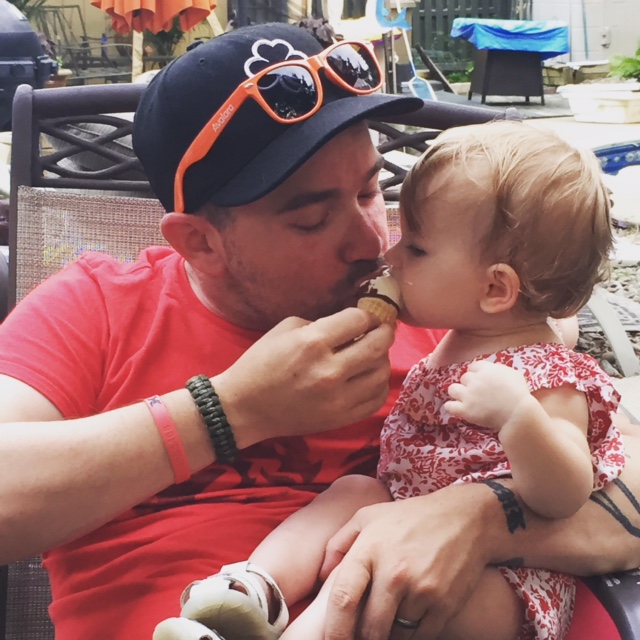 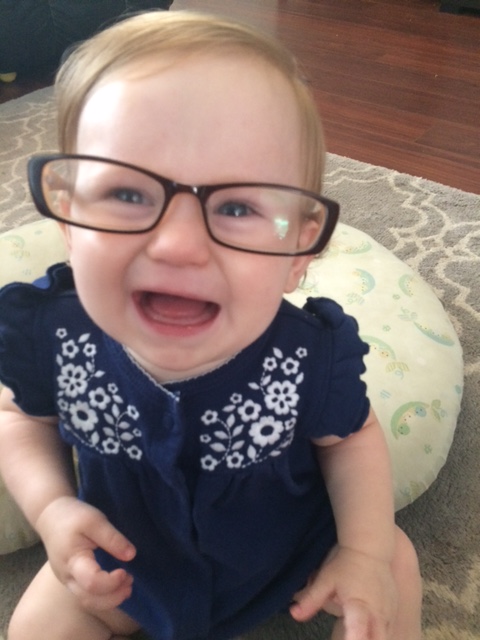 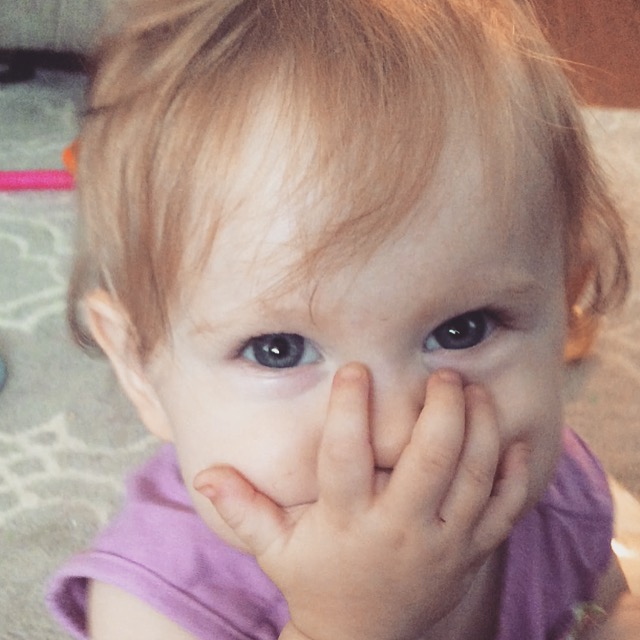 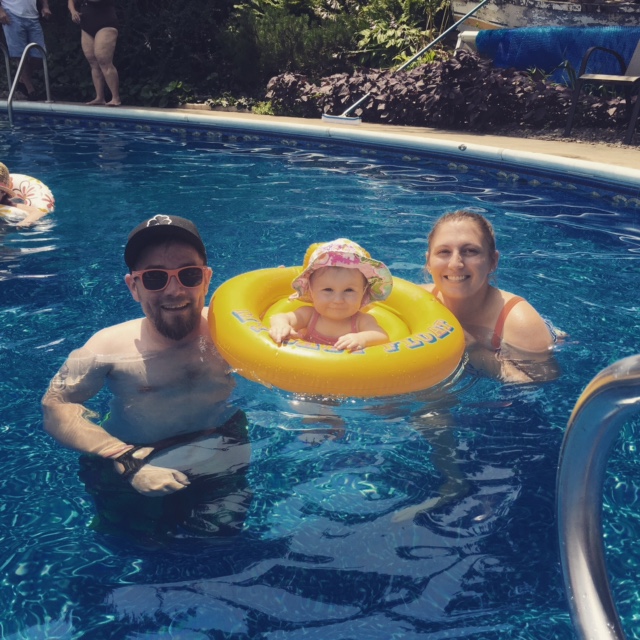 pool days are the best days 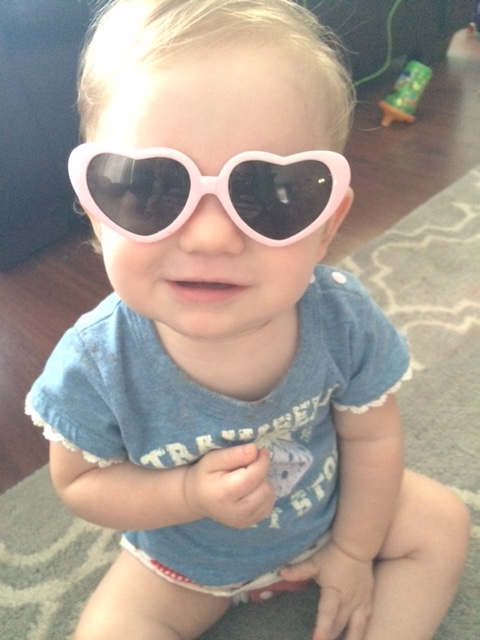 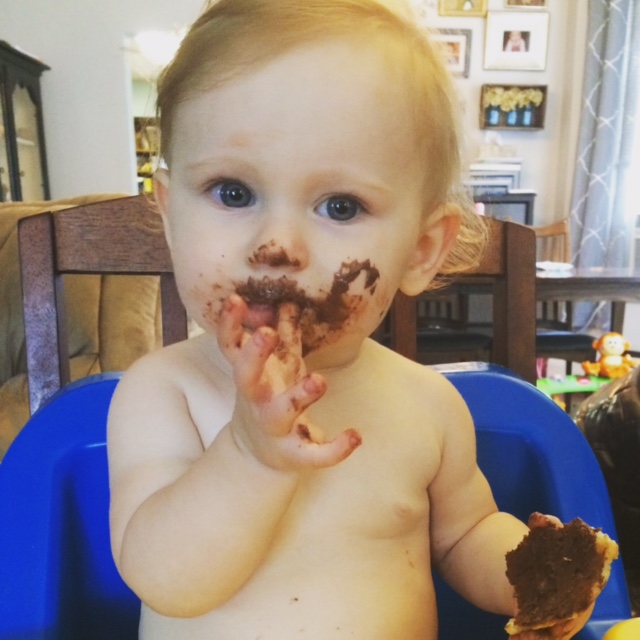