Please, allow me to indulge my inner 13-year-old for a moment.

So far, everything has been going swimmingly with my new job. The organic cafe is amazing, the work is manageable, I’m just busy enough that the day flies by but I’m not overwhelmed, and I just signed up for personal training so I can begin to tackle the ginormous task of getting my pre-baby, pre-infertility body back… it’s good. All good. Except for this one thing.

I have no friends.

This isn’t my first time having a hard go of it. Way back in the day, I switched to private school going into my freshmen year of high school – voluntarily – hoping that I could have a second chance at finding my place in the pecking order. (I’m not sure if my parents even knew what my motivation really was. I insisted on switching from public school to Catholic school, possibly claiming some sort of religious epiphany, when really all I wanted was to fit in.) I was looking for a fresh start, with no nerdy pre-teen, pimply-faced, awkward phase prejudices. Now, the fact that I strode in to that first day of freshmen orientation with dyed bright red hair and blonde bangs like Ginger Spice probably should have clued me in that I was never going to part of the in-crowd, but I digress… 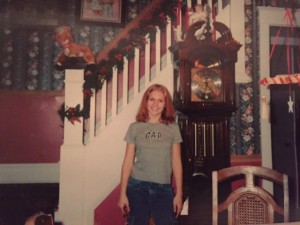 who let me out of the house like this?

I expected everyone to be new like I was. I stupidly did not consider that only a handful of middle schools fed into that high school, and that everyone already knew everyone (even between the different schools, somehow), and that the cliques were already firmly established. To break in I would have needed to be really, really cool (and I really, really wasn’t). I wound up exactly where I was before transferring schools – somewhere on the fringes. Not a loser, per se, but not one of the cool kids, either. Simply there. Non-existent in the eyes of the socially accepted.

That was high school, and I’ve come a long way. (For example, I’ve finally figured out that blonde bangs and red hair are not an attractive combination). But I have another example of a time I expected an even playing field and was unpleasantly surprised. When I started working at Coach, they had literally just built the store. I was part of the opening crew of people. So imagine my shock and disdain when I walked into that first employee meeting, expecting a bunch of people who needed to get to know each other, and instead found that everyone had already been working together for years (at another store). I found out that day that the retail mall world is small, and generally mall employees migrate from store to store in groups. Annoying! Luckily, with a little wit and sarcasm, they welcomed me into the fold (eventually).

I have a hard time making friends, but once I do, I usually keep them around for life. I still talk with the girls who I worked with at my first “real” (full time, corporate, post-college) job in 2006. I’ve been to the weddings of most of those Coach friends, and we still keep in touch and half-heartedly try to plan a (probably-never-going-to-actually-happen) brunch. I married my boss from my first job ever! I love my work friends. Clearly.

So that’s my excessively long preamble to introduce the fact that so far, I have no friends at work (besides my former coworker and carpool buddy, who is in a different department and on a different floor in a different building, so I’m not counting him for the purposes of this rant). I know it’s only been a short time. But I think the frustrating thing is that I work with a team of women, and at my last job where I worked with all women (at the daily deals site) we ended up being really close friends. Again, they are people I keep in touch with to this day. Plus, it seems like the girls at work do have that… I’m just not a part of it.

I guess it just doesn’t feel promising. They all go to lunch and sit together, so I tried going at the same time. I’m not proud to admit this, but the one day I intentionally sat alone at a table in plain view of their table and broke out my Nook. I was testing the waters to see if they would invite me over to sit with them. Lo and behold, they did! But then things got awkward.

They waved me over, so that was cool, but I’m not really good at interjecting myself into conversations and no one really asked me any questions, so the whole experience wound up being me, at a table, listening to other people talk. Like a creepy lurker. And I wish I could say this has only happened the one time, but so far it’s happened several times, basically whenever I have occasion to sit near them. There’s lots of talking, but I’m never contributing, just listening. I try really, really hard to think of things to add, but when I do say something, the conversation sort of dies right there before moving on to other things.

I wish I was more like my husband, who is really outgoing and good at making friends everywhere he goes. He’s great at parties and in potentially uncomfortable social settings. Me? I’m just..not. I need to be prodded, and then maybe I’ll have a really funny comment or observation, but I’ll probably stutter or make a face or (unintentionally) roll my eyes or lisp or something, because I’m really only good with people I feel comfortable with, or when I’m writing instead of speaking. Basically, I need the other person to take the reins and do all the work in those initial stages, and then I’ll be like, the best friend ever. But The Cool Posse already has their members, and as far as I can tell, they don’t seem to be recruiting.

Yes, I’m sure this awkward loneliness is temporary, and I’ll probably find a friend (maybe?). But for now it’s very frustrating. My desk is a little bit separate from everyone else (across an aisle), but our cubes are all open, so often I feel like a voyeur just observing their jovial camaraderie. I wish life came with a sticker or a merit badge that could just prove that yes, I’m worth getting to know and should be included in the conversation. I’m not just some stage 5 creeper looking wistfully over from the far corner (which, I’m assuming, is part of my problem. I know the first rule of being cool is to act like you really don’t care at all).

I realize how ridiculous this post is. I also assume that if any of my new coworkers were to read this, they would really think I was nuts, and they would also probably say that no one wants to talk to someone who does nothing but obsess over people liking them.

In sort of related news, I started working out during lunch at the company gym! I’m baby stepping in with just 2 days a week and seeing how it goes. I really, really like the trainer (who made me a customized program), especially since she doesn’t seem to think I’m crazy. Not even when I started emailing her bikini pictures of my half-starved and basically emaciated body from 2008 and telling her that was my “goal weight.” Ha!

That mostly solves my lunchtime dilemma. Besides that, I guess I’ll just keep being creepy and watching everyone else have fun. There’s a Christmas party (for just my team, not the whole company) next Monday that I’m sort of dreading. It can either be my way in, or yet another awkward few hours (but this time with no shield of actual work to do). I’m not even sure if there will be alcohol and I don’t want to be “that girl” who asks. The alcohol could also go either way – very well (“Amanda is so fun and charming!”) or very badly (“Why is Amanda trying to breastfeed that lamp?”)