So, I found out that I’m a total nag/bitch. A nitch?

Here’s what happened: over the weekend, I was babysitting my little brother Michael and, unbeknownst to me, he used his iPod to record my dog running around the house. So as you may imagine, I kept on living my life and being myself without the self-conscious restraint that comes from knowing that your every word and action is being documented. Once we figured out he’d been recording us for like ten minutes, Eric and I immediately made him play it back. And I did not like what I heard. In the video, I sound harpy, squawky, and annoying. I got caught on film going on some rant about undone chores, as per usual. I hated the way I sounded.

Also, my sister recently posted an FB status about how despite the fact that her husband isn’t a typical “manly man” who is super into sports and good at swinging a hammer, he’s a great husband and father because he helps her out with chores around the house. Eric left a comment on her status saying that what she was describing, “sounded like my dream husband” (because that’s precisely the kind of thing I’d been nagging about and we’d been bickering about all weekend), and that comment made me feel kind of crappy. It made me feel like I don’t appreciate my husband. And you know what? Maybe I don’t appreciate him enough.

I think the problem lies in trying to change someone when you already know who they are. Case in point – one of my chores is doing the dishes. And sometimes I let the dishes go…for a couple days (and sometimes even a couple more days after that). When it comes to chores, I have two modes: psycho OCD dirt abolisher, or lazy, lounge about I-don’t-give-a-shit-I-will-just-live-in-my-own-filth-forever super-slob. So this weekend I was feeling like the latter and started harping on him that MAYBE he could NOTICE that the sink was full of dishes, pick up a sponge, and DO SOMETHING about it. But you know what? He didn’t notice. He totally didn’t.

Like the other day, I bought all new K-cups for our Keurig and put them in the k-cup holder directly adjacent to the Keurig. For a few days, he kept using regular Folgers coffee, until I finally asked him, “Why aren’t you using the new k-cups I just bought?” Well, guess what? He didn’t see them. Literally, did not see them. Despite the fact that they were right in front of his face, brightly colored, and totally obvious, he did not see him because he was not looking for them. That, ladies and gentlemen, is my husband.

In a similar vein, I really doubt he “saw” the overflowing dishes in the sink. Sure, he saw them… as much as you see anything that’s in your way, and I’m sure he did his share of adding to the pile, too…but it literally did not cross his mind to wash them. It wasn’t a conscious act of defiance or laziness, but rather a complete lack of thought altogether. It would have been just as logical (in his mind) for him to smear on some lipstick and start lip-syncing to Justin Bieber as it would have been to do the dishes. I was home, it was my job, and I slacked on it. So why should he take up the burden?

And that’s the real crux of the problem here. I was mad at myself for being so lazy, and I was taking it out on him, who was just as lazy, but in no way more punishable for this laziness than I. What did I do this weekend? I napped. I read for long stretches until my eyes got heavy, then I napped, then I woke up and read some more, and then I napped again. Oh yeah, swinging social life right here. I stayed in yoga pants and didn’t leave the house (well, until I went to book club Sunday night to talk about what I read). It was really nice, and sadly, very similar to how I’ve been spending most of my weekends lately. But you know what? He didn’t bother me or wake me up or ask me why the hell I was neglecting the gross sink full of dishes. He just let me be a bump on a log. He let me sleep.

And it’s not like he does nothing. Yes, my chores are more numerous, and more “year-round.” But when the grass is long, I certainly don’t get out the lawn mower just because I notice it. When it snows, I don’t pick up a shovel. It really is the same concept.

This extends to pregnancy, too, and my last post about expectations for being pregnant. I expected to be put on a pedestal throughout the whole time. I expected things to just be…different. But they’re not. We still have the same fights, we still interact the same way. Much to my dismay, he’s not fascinated by my doppler and doesn’t kiss my belly every night. However…I think he’s just as scared as I am to believe it’s really going to happen, and is maintaining some level of detachment from the whole thing in case things go south. I know he’s excited, to an extent… but why get your hopes up over something that’s not guaranteed? He’s like that about everything. Plus, there’s the oft-quoted phrase, “A woman becomes a mother when she gets pregnant, a man becomes a father when he holds his baby for the first time.” So true, so relevant. I think it feels more real because at the moment it’s happening mostly to me, but come June there will be no denying that it’s happening to BOTH of us.

Back to chores. I’ve decided that as a late new year’s resolution, for as long as I can last, I will do all my chores without the usual chip on my shoulder. (You’re all my witnesses that I’m saying this!) I’ll stop being such a martyr about it. I’ll remember why I do them: because I love my family, my messy husband and my messier dogs. Chores aren’t meant to be enjoyable, and no matter how much I complain, they’ll still need to get done. So I can either undertake these unpleasant tasks with a scowl and a snarky comment, or I can do them with a smile. My attitude is my choice. 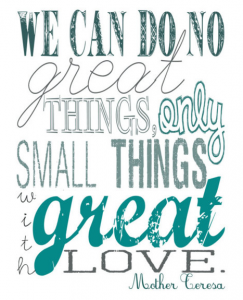 I keep going back to the Mother Theresa quote, “We can do no great things, only small things with great love.” I’m sure she wasn’t talking about laundry and dishes, but I do feel that the concept is applicable here. That’s my new mantra: small things, with great love. Chuck the sarcasm at the door. Save the martyrdom for the real martyrs. And start appreciating all of the things that my husband does do for me.

And that way, when he does pick up the sponge unexpectedly and do the dishes, I’ll be oh-so-pleasantly surprised.