This is the longest week EVER.

I know there’s a lot of conflicting theories on whether it’s better to have a fetal doppler or not have a fetal doppler, but in my case, I think I need one. I cannot go this long without some kind of reassurance. The only reason I haven’t picked one up yet is that it’s still too early to really hear the heartbeat with one (according to reviews) and I cannot handle the panic that would go along with me not hearing it when trying to find it. Well, that and the fact that the girl selling one on Craigslist never got back to me. Jerk.

Four more sleeps until the ultrasound. I’m not feeling much of anything right now – anxiety, I guess. A tiny bit of stomach upset in the morning but not as bad as a couple weeks ago. Random pangs of breast tenderness and nip itchiness. A few minor cramps/twinges in my abdomen. With the way everyone goes on and on about the first trimester, I would think that the whole thing would feel a heck of a lot more dramatic than it actually does. But as it stands, I just feel like me…but with a fatter tummy. 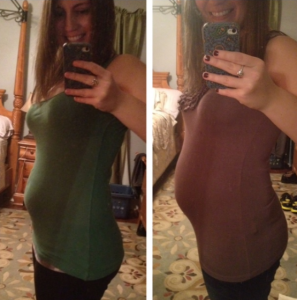 My stomach remains my #1 reassuring factor through this entire thing. It’s definitely big, even bigger than last week. And it wouldn’t continue to grow if the baby wasn’t still growing, right? This is what I keep telling myself. Overall I feel good about everything, but also very aware of negative outcomes. It’s an excited terror.

I also hate the feeling that I’m just biding my time between ultrasounds. Like, why do I have nothing else to talk about here? It does feel like I’m holding my breath between each appointment, and I’m too damn scared to talk about anything else. I had an easier time focusing on other topics between cycles when nothing was going on. Now that this appears to be happening, my inspiration is blocked up tight. I pretend like everything is going fine, but on the inside I’m just a big bundle of nerves. That’s why I need the doppler. So that I can go on with my day to day life without existing in a constant state of panic. I can’t tell you how many times this week I *almost* called my OB/GYN to request an early ultrasound for peace of mind.

As predicted, I’ve been pretty much “outed” at work. I was really proud of myself because while talking to two coworkers who just found out about my condition, there was opportunity for me to say, “Well, it was a really long road. Infertility treatments, and two miscarriages this year. So we’re very grateful.” They were appopriately sympathetic and supportive. I dunno… it feels dishonest to just gush about everything happily and act like it was so easy to get here. That’s not who I am, and that’s not my story. This was a saga, not a fairytale. I’m just hoping for the fairytale ending.

And of course I can’t help but feel awkward about people knowing. Because God forbid we get bad news on Monday, then there are that many more people to share it with. Admittedly, getting to 8w5d was a huge, huge accomplishment. It made me feel better. But I’m not 100% confident, and I fear I never will be. Not until this kid is out, anyway. Right now it feels so intangible and whimsical, almost like planning out all the crap I would buy if I won the lottery. But I never ACTUALLY win the lottery. I just have a heck of a lot of fun thinking about it.

Most days I’ve been sitting at my desk daydreaming about the future. Our little gender reveal party, my shower, all that stuff. I constantly pull up my desktop calendar and stare at particular days or flip through the months and count out how far along I’ll be throughout next year. I actually started stressing out over when my baby shower could possibly happen because the spring is already full-to-packed busy. We have my sister-in-law’s wedding and Easter in April, a work event, Mother’s Day, my little sister’s First Communion, and Memorial Day in May, and then June… well, that’s baby time. Oh, well. Why am I worrying about this now? Probably because it makes it more “real.”

I took the day off work Monday because of the ultrasound and Eric’s birthday. I also have a lot of cooking to do for Thursday even though I’m not hosting because I want to eat well despite my dietary restrictions. So, I’m bringing a bunch of gluten-free goodies. Next week should be great – a nice, short two day work week, a reassurance fix with the ultrasound, Thanksgiving with my whole family, yummy food, and tons of leftovers. Now this week just needs to hurry up and end.