Like many modern moms, I have a decent amount of “mom guilt” when it comes to kids and iPhone usage. I’ve seen plenty of fights for both sides – those who believe technology helps children learn, and those who insist that it stifles creativity and imaginative play.

For example, this gave me pause: 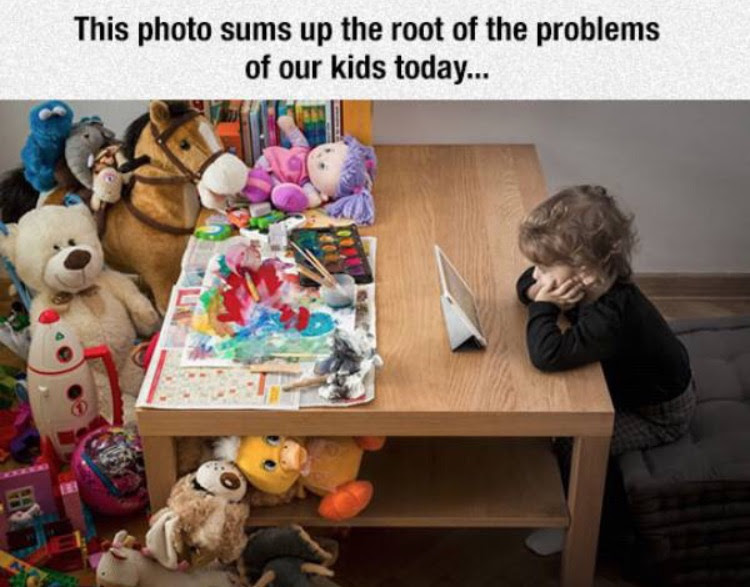 Scary Mommy just did a post about this topic entitled “Why I Don’t Feel Bad About Giving My Kids Unlimited Screen Time.” The author brought up some good points:

So much emphasis is put on kids to be well-rounded and to excel at sports that it’s reaching a fever pitch. We place arbitrary rules on our kids because we are so worried about their childhoods differing from ours. Maybe we should pause to consider that our parents didn’t grow up with Atari, Nintendo, and Commodore 64s, either, and we turned out just fine, didn’t we, Generation X?

Our mothers survived without microwaves and cordless phones, and we are doing a pretty good job of surviving as grown-ups in spite of having all those things. We survived the technology of our generation, and our kids will survive the technology of theirs.

In theory, I think most of us (kids AND adults) could stand to get off our phones and connect more with the people around us. I’m guilty of it too – if I have a few moments of downtime, I quickly check Instagram. If a new email dings, I give it a read (but that could be more about my obsessive need to clear the red bubbles off the screen).

At our house, we don’t have set limits on screen time, but if I notice Molly getting too engrossed in her phone I take it away and direct her towards toys. I mean, the fact that she has a phone at all is probably controversial – but honestly, it’s been a lifesaver for situations such as 7 hour car rides. It’s not like she’s on the thing 24/7.

I always ask my sister for app advice and she recommended something called Endless Alphabet. It was $5.99 (the most I’ve ever spent on an app) but it looked educational, so I got it for Molly. It’s very cute! Even the background music is pleasant. Basically the narrator says the word, then the letters scramble and you need to drag each letter back to its spot. As you drag, the letter makes its sound (so as you drag P, it says “ppuhh-puhhh-puhhh!) and once you complete the word, the narrator repeats it again and there’s a short animation illustrating the definition.

When she first started using the app a few months ago she had trouble dragging the letters and would give up fairly quickly. But lately I’ve noticed her repeating the words with the narrator and dragging the letters like a pro. It’s also adorable because the words are more complicated than her vocabulary, but she is getting great at mimicry, so she’ll sit there repeating words like “gargantuan,” “abominable,” and “portrait.”

So last night she was playing with the magnets on the fridge. We have one that’s a stop sign and as I’m standing there not really paying attention, she points at it and says “O!”

I looked down and wouldn’t you know it, she was pointing at the letter O.

Then, with no further prompting, she pointed at the P and said “P!”

Next, she pointed at the T. But instead of identifying it as “T”, she said, “Tuhhh-tuhhh-tuhhh-tuhhhh!” and that’s when I realized this early stage letter recognition was 100% thanks to the Endless Alphabet app.

(Then she pointed at the “S” and said “C!” but I’m gonna go ahead and cut her some slack because the kid isn’t even two years old).

Tonight I wanted to test her skills, so I broke out the Elmo Alphabet letters she got for Christmas and quizzed her. No lie – she knew the name or the sound of about half of those letters.

Meanwhile, in an ironic twist of events, I tried to get a cute photo of her playing with the letters because I already knew I was going to write this post. So verrrrry quietly I took out my phone so that I could capture her engrossed in her task. But then of course she caught me red-handed and started throwing a tantrum when I wouldn’t let her have my phone. This is because her favoritest thing in the world is to sit on my lap watching all the videos in my camera roll. And when I say videos, I mean the first three seconds of one video before frantically skipping to the next one. Which is totally not annoying. At all.

So the lovely photo below was snapped after I had just insisted, “NO PHONE. NO VIDEOS. PLAY WITH THE ALPHABET.” 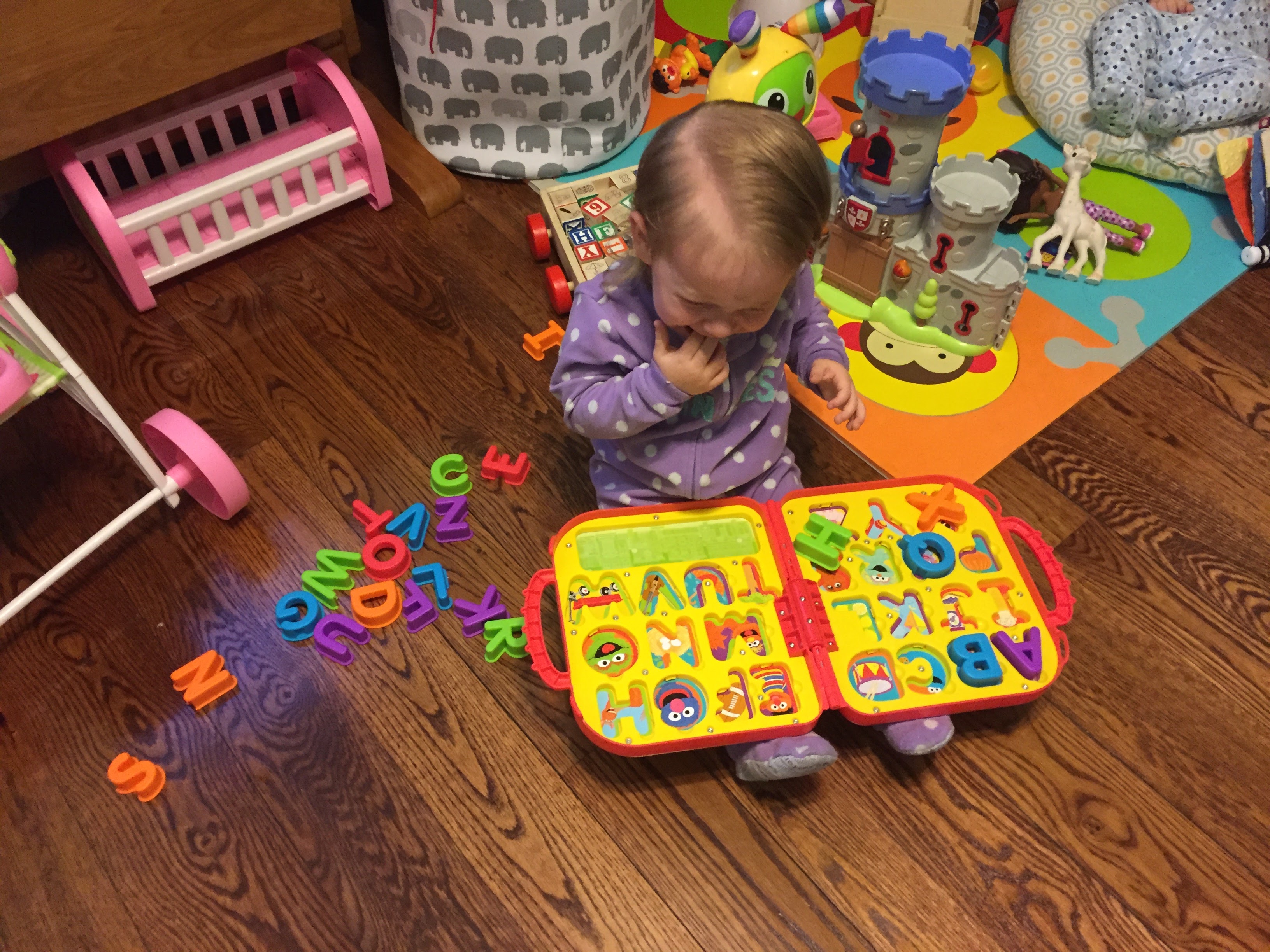 As for screen time… I’m still on the fence. I can see both sides of it, really. The first picture I posted does make me sad. But you can’t deny the power of the mighty Endless Alphabet.

And if you’re like me (the kind of parent who lets your little one play with an iPhone while still questioning yourself at every turn), I highly recommend this expensive app. It helps soothe the guilt a little bit.