Overall, I’m a healthy girl. A few minor exceptions: I have a geographic tongue (which I’ve had my whole life, and is weird but harmless), I’m lactose intolerant and I have an adult onset allergy to latex. I’ve never been really sick, never broken a bone, never been hospitalized. On the lady parts front, I started my period a few months before my twelfth birthday and have gotten it every 28 days since, like a damn clock. I’ve never been on birth control. I ovulate on day 14. (I’m sorry, I suck. There’s a point to this seemingly useless bragging, I promise). 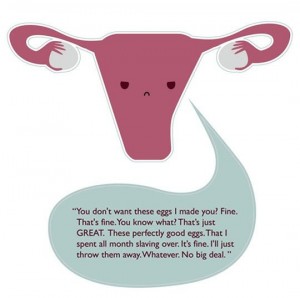 I’ve been thinking a lot about why this transfer feels like it’s leading up to an inevitable BFP despite so much evidence to contrary (such as other people’s stories). I envision that once the embryos get shot into my uterus, they’ll get a playful nudge from my reproductive parts and my lining will say, in a mock angry voice, “Where the hell were you? We have been waiting for you.”

You may have noticed from my stats at right that our problem is MFI. I haven’t gone into too much detail because this is my blog and I don’t want to be blabbing about my husband’s health all over the internet. But let’s just say we were conceptionally challenged because we needed some swimmers who could make it to that egg. The egg who was waiting every single month. On day 14. I’ve spent hours trying to find another blogger with the exact same issues so I could compare timelines, but so far to no avail. So I really have no basis for thinking this will work except for my weirdly optimistic, can-do attitude.

Besides the inherent yearning for children, I feel like I was actually created to do this. My grandmother had six kids, my mom five and my 23 year old sister has two with another on the way (ugh. I know. But she’s not a bitch about it). I come from a long line of fertiles. I need to join their ranks. I cannot picture a future without it.

My first RE said, “Sorry darlin’, don’t even waste your money on IUI. It probably won’t work. You’re going to need IVF or a miracle.” Of course at the time, it was discouraging. We had more of a “wait for a miracle budget,” not an IVF budget. We also had zero insurance coverage for any of this. So we went back home and said, “Let’s ignore this problem for a while and hope for the best.” If he was ignoring it, I never was. Each month was a tragedy. Some months I told him the best day, some months I didn’t and just put the moves on when the appropriate time came and on what I hoped he considered random days. I figured eliminating the pressure could only help. I have a tendency to be a bit controlling (cue Eric/my family/anyone who knows me saying, um, yeah A LITTLE), especially when things are totally out of my control. I wasted so much money on OPKs even though they said the same thing every time. Day 14. Day 14. OK, once it was day 13. But I’m textbook.

Now that I’ve been reading about what will happen after that (hopefully inevitable?!) BFP, I’ve been getting freaked out. I honestly thought that once you got that second pink line, it was time to pop the champagne and celebrate. Only now am I seeing how woefully uninformed I really am. First of all, two pink lines mean nothing. I’ve watched people photo document test after test at different times on different days (And does the line really get darker as more time passes? What is the significance of this? Someone please tell me!) Plus, the first beta (originally in my mind “the icing on the cake.” HA.) is only cause for minor celebration because if your numbers aren’t doubling by the second, you’re screwed. There are so many things that I did not prepare for. I had no idea you could be just a little bit pregnant.

I know thousands (millions?) of women suffer misses and that I am strong, but guys… I just don’t know if I can handle it. I really don’t. I’m not sure what that means, “not able to handle it.” I’ll have a mental breakdown? I’ll spontaneously combust? I’ll drive off into the sunset, never to be seen again? No clue. But the mere prospect of this possibility – of having something that I’ve wanted so badly yanked from my grasp before I’ve even had the chance to shop for belly band denim… I can’t. Any of you who have gone through it, fertiles and infertiles included, my heart goes out to you and I am in awe. I simply can’t fathom how you survive it.

I know, I’m worried about losing a baby that isn’t even implanted yet. It’s madness. My brain is always 5 steps ahead prepping for any eventual trauma. We’ve dealt with so much, we’ve come so far and we’ve made it here. So now… what’s next?