First off, today is my 4th wedding anniversary. Time flies when you’re battling infertility, amirite? I’m going to share a photo from my wedding day to prove that I was thin once (and it wasn’t that long ago). Maybe my “goal outfit” should be this teeny, tiny, exorbitantly overpriced white dress… 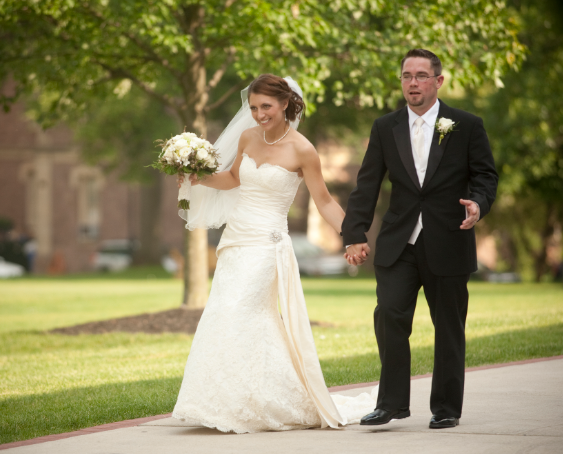 mark my words, I will get this body back…

Anyway. This morning I was taking the dogs out, as I do every day right before I leave for work. Ryder, our Golden, is free to roam the yard off-leash and won’t run away, but Bird would sprint cross-country if we let him. So I had Bird’s leash in my hand, and he yanked on it, and I guess my grip wasn’t as good as I thought because the leash dropped. I watched helplessly as he ran with Ryder to the other side of the yard.

THANK GOD Eric hadn’t actually walked out the door yet to leave for work yet, because clearly my fat ass wasn’t going to catch Bird. I yelled up the stairs for help and stood by uselessly as Eric followed Bird around, using his best stern voice to try and get him to come back. No luck. Our property borders a large field where horses are kept, and Bird thought it would be a good idea to go chase the horses, who were out and grazing just beyond the perimeter of our yard.

I didn’t see it happen, but apparently the horses didn’t take too kindly to being chased, and one of them expressed his anger by straight up kicking Bird smack in the face. The good news is that this caused Bird to come running back to Eric for assistance, so at least we got him back in the house. The bad news is that he got kicked in the face by a horse.

I felt terrible, and the whole thing was 100% my fault. Eric ended up working from home and of course rushing Bird to the vet immediately. The poor little guy wouldn’t let anyone near his mouth without snapping at them, so they had to put him under anesthesia to assess the situation and to sew him up. His jaw wasn’t fractured, but he did need both internal and external stitches and he might end up losing a tooth.

Happy anniversary, right? I mean, it could have been SO much worse (like, if the horse had stomped on his head in earnest… if he ran out into the road and got hit by a car… if we was still missing and unaccounted for, and possibly halfway to Canada). But still. Poor Bird has to wear a cone of shame for 2 weeks, has to be on medication, and woke up crying from surgery because he was in so much pain. As it stands now, he’s just moping around the house not being himself (it probably has a lot to do with wearing the cone, which he does not like). I feel like a terrible mother. Oh, and the $1100 vet bill wasn’t pretty, either. This comes not even a week after dropping $450 on new brakes and rotors for my car and a few short weeks after accidentally putting my iPhone through the wash. So much for saving up for maternity leave, eh?

Also… selfishly… I’m mad about how it kind of ruined the whole day. First, it cast a negative light and became the central focus of our anniversary. Second, Eric sent me beautiful flowers to work, along with a card that said, “Surprise! We’re going out to dinner. Your choice of where.” This coming from a man who doesn’t really like going out to dinner, and who I usually have to bribe to go out to dinner. Me, I love going out. So had we not had our little drama, I’d have spent the afternoon eagerly weighing my options in terms of restaurants. Instead, I was stuck knowing that we’d have to do takeout because Bird couldn’t be left alone. And I even straightened my hair today!

But as I said, it could have been worse. 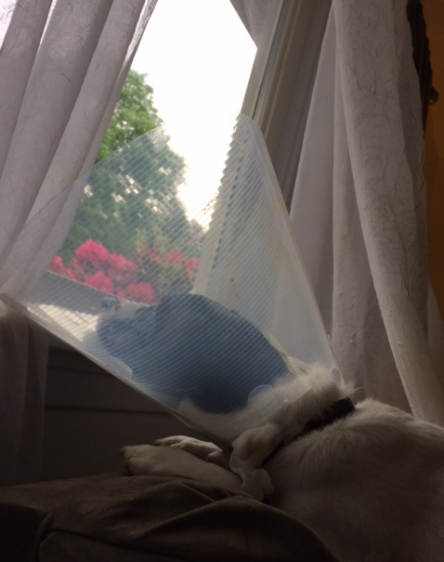