If I ever start a band, that’s what I’m naming it.

This week was interesting, to say the least. It culminated with me on my hands and knees last night, furiously scrubbing chicken shit off my dining room walls and cursing the chicken coop man who refuses to return phone calls.

Here’s what happened: the chicks got too big for their cardboard box, and around that same time Eric stopped cleaning out their cardboard box. This resulted in a filthy, smelly, chicken filled cardboard box caked in excrement on my dining room table. Not cool. Last garbage day I made the decision that I could not, under any circumstances, continue life for one more day with that pit of despair contaminating the air of my home. The box got tossed, but the chickens remained. I had to find a quick solution.

I should also mention that I found someone on craigslist who sells beautiful, hand-constructed chicken coops for $250. This is a fantastic bargain considering Green Acres wants $700+ and the materials to build one would probably cost $200 alone (not to mention the manual labor, time spent, and so on). The dude answered the first time I called but hasn’t since. Hence, the homeless chickens were relocated to the dog crate.

The problem with that solution, of course, was that we no longer had a functioning dog crate. So at first we let Bird run free, a privilege that Ryder earned a few weeks ago. He thanked us by peeing on the bed (daily), chewing my glasses beyond recognition, eating one of Eric’s expensive tools, and eventually pooping on the bed. Clearly this was a bad plan.

Someone had suggested that we close him in the bathroom instead. This turned out to be a worse idea. 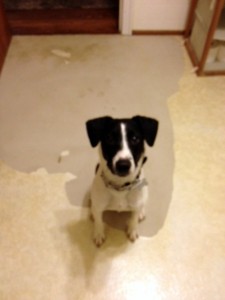 The yellowing linoleum that came with the house, while ugly, was perfectly functional. Now we have half a floor missing, which looks quite ghetto if you ask me. Bird also managed to chew through 2 bath towels, 3 rolls of toilet paper, and a very soft and comfortable bath mat that we got as a wedding gift. He was just about to start work on my bathrobe when we got home.

As angry as we were at Bird, this whole fiasco did force us to take action – quickly. Eric found someone else on craigslist with a smaller, “transitional” coop for just $35. We spent last night cleaning out the layer of solidified bird droppings that had formed in the bottom of the dog crate in the space of just a week. It was a grand time. The mess in my dining room was epic, but now it’s cleaned up and smells pretty and the chickens are outside! Yay! They love their new home and I love that because of a naughty Bird, the stinky chickens are officially where they belong. 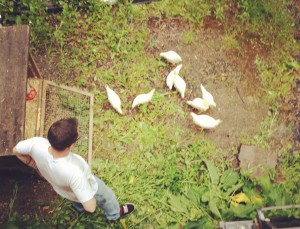