Try to contain your excitement…I figured out a topic to discuss other than indigestion.

I’m wondering if anyone feels the same way I do about this.

Friday was a coworker’s last day, and the tradition since I’ve been working here has been that he, another coworker, and I all go out to get lunch together on a fairly frequent basis. No one at my company takes full lunch breaks, but we do often run out to grab something from the myriad of nearby food places. As these things tend to be, it’s not so much about seeking sustenance – it’s about taking a much-needed break midday, breathing in some fresh air, talking, laughing, and generally bonding. At least, that’s how I think of it. Even when I bring my lunch, I usually go out with them and find something to purchase – a drink, some ill-advised chili cheese fries. These are trips that I wouldn’t bother to take by myself, but since they are going, I go along. Because… it’s not about the food. It’s not even really about taking a break. It’s about more than that.

So Friday, other coworker brought leftovers from home and decided she didn’t want to come to grab lunch…on his last day! I was trying to explain my whole theory of, “It’s not about the food…” but I realized that I was sounding nostalgic, needy, and perhaps a little silly. So I just let it go. However, it did make me think about how I always do this, and how maybe I’m the weird one. (And as a side note, we did eventually convince her to come and we had our final hurrah, so don’t worry).

Another similar example: Eric has skipped many a family dinner because he had just eaten, or wasn’t hungry for whatever reason. But even if I had just eaten or wasn’t hungry, I would still go… to HIS family dinners at his parent’s house. (I guess they are technically my family too through marriage). I’ve definitely said these words to him before – “It’s not about the food. It’s about seeing the family.” But he acts like I’m crazy for going to a so-called dinner with a full stomach. As the nieces and nephews continued to multiply and my retired in-laws started to travel more, the family dinners went from weekly to practically nonexistent. I understand that it’s a lot to take on (and clean up), but at the same time the absence of them makes me sad, and grateful for all the times I went. I love family dinners. Even when I’m not hungry. This is why Eric and I live within a 5 mile radius of his parents, my parents, my sister, and all three of his sisters. All the aunts and uncles on both sides are within driving distance, and we literally see both sides of our family for every holiday. Yeah, we talked about moving to Denver last year, but was it ever going to happen? No. We’re both hardcore family people (despite his willingness to skip the occasional family dinner). If my house were big enough to take on the responsibility of hosting weekly dinners, I would do it myself. My ultimate goal is to have that one day.

It’s funny because as I said, my little sister’s 9th birthday was last Thursday and all she wanted was for the family to come over and have cake with her. Despite the fact that she’s a little kid and loves sweets, I know her well enough to know that the cake was not the important part. She wanted everyone to come over and hang out for a little. We couldn’t do dinner because she had to go church to fulfill her First Communion requirement, and yeah it was late for my other sister’s kids to be awake, but we all came over at 8:30 p.m. on a weeknight because to Allie, that’s what matters – seeing her family. I’ve never met a little girl who appreciated family gatherings so much. But I totally get where she’s coming from, because I’m exactly the same way. 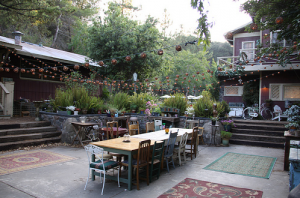 “What a beautiful, perfect backyard we have. We should sell our house.”

Anyone else watch the show Parenthood? Anyone else irate that they sold that house? In case you’re not a fan, here’s the long story short: these parents have a positively gorgeous, craftsman-style home with a beautiful backyard adorned with twinkly overhead lights. This is the hub where the family gathers to discuss problems, have rowdy dinners, and just generally live out their lives. But the matriarch decides that she wants to be closer to the city so she can go to art galleries and stuff on a whim. Her husband, the ultimate homebody, is initially opposed but eventually bends to his wife’s wishes and sells the beautiful, perfect family home in the season finale. I understand that different people have different values, and that no one way is better or worse than another. But in this show, that whole scenario is exactly opposite of what I want for my life. I am seeking out that house where everyone gathers, and I would never, ever, EVER sell it. As my father likes to say, they’d be carrying me out feet first. There’s nothing I want more than an outdoor picnic table and some strategically placed Edison bulbs on a string for ambiance (can you tell I’m a little obsessed with lighting in general?). I want to create a warm, welcoming home where family comes together… even when they’re not hungry. Even when it’s not a special occasion. Even when it’s a random Tuesday.