Yesterday at lunch a friend asked about Molly’s sleep habits.

She has been a really good sleeper for most of her life, sleeping through the night early on and after a mild bout of 4 month sleep regression and some hiccups while teething, back on track and going to bed between 7 and 8 most nights and waking up around 6:30. The friend in this scenario has a 4-year-old who has never been a great sleeper and who still isn’t. But I can guarantee that has nothing to do with parenting skills and everything to do with luck.

My experience with parenting has been short, but I also think I’ve learned a lot, and here I can sum up everything I know in just a short phrase: There is no right or wrong. All you need to do is love your children.

Molly is a good sleeper because she is a good sleeper. I’ve read nothing on sleep training, I never hired a night nurse to help out, and I don’t think I’ve even Googled tips and tricks that much (because I never really had to). Music actually turned out to be the thing that helped most with signaling bedtime for her, which isn’t even something I found out on my own (my MIL discovered that trick while babysitting her once). But all this talk of sleeping/not sleeping got me thinking.

Every time I go to a baby shower and am solicited for parenting advice for the new mom, I write a variation of the same thing:

“All I can really tell you is that you need to love that baby with your whole heart, and trust your instincts, and everything else will fall into place.”

It’s so true, isn’t it? And none of us really know what the hell we’re doing, especially not the first time around.

I will never forget when Molly was just under a week old and we brought her to church. This was a huge deal because I very rarely convince Eric to attend church with me, but since I had a c-section and couldn’t drive, and wanted to show off the baby, to church we went as a family of three.

Everything went fine but then afterwards at breakfast, we realized that we forgot the nursing cover (and this was well before I felt comfortable whipping my boobs out for all to see), and the nipple shield, and I think also diapers. So we rushed out of the restaurant, bellies empty, with a red-faced, screaming newborn, and put the pedal to the metal (while still trying to drive safely) to make it home as quickly as possible to take care of our new daughter’s urgent need to eat. We laughed together about how green we were with the whole parenting thing.

Despite the fact that going out to breakfast that day was an epic fail, I remember feeling very close to my husband in that moment, very much like, “Well, we may suck at it sometimes, but at least we’re in this together.”

This is probably the pregnancy hormones making me sappy, but lately I’ve been noticing Eric a lot more, and feeling grateful for how involved he is. I was going to write this whole long post about it the other night on Facebook but 1) I know those posts are annoying, it’s totally humble-bragging and 2) he actually ended up needing to go to his mom’s house, leaving me alone to deal with dinner and bedtime, which made the immediate feeling to get all lovey-dovey pass.

Overall though, he is such a great dad, and I feel like I want to let him know that more often than just in mid-June when I’m supposed to tell him. Example – when we got Molly’s 1 year photos done, he was constantly just behind the camera, doing all these silly antics to make her laugh and smile. The photographer was the one who pointed out that seeing a dad that involved and that good at making the baby happy just wasn’t too common. Maybe I’m so used to it, I didn’t even notice. That’s just how he is with her.

I’m definitely the default parent, but still, he 100% knows her routines and moods and likes and dislikes. If there’s ever a night I’m not going to be home, I don’t need to worry about leaving a long list of instructions (sometimes I do leave one, because I’m a control freak, but the point is that I don’t NEED to). He knows that first thing every morning she wants a cup of water and some strawberries and then probably scrambled eggs if it’s the weekend. The other day I overheard him saying, “Oh Molly, you give the best hugs in the world,” as she clung on to him. And yeah, my eyes may have gotten a little misty. He loves her so much, and he makes such a great dad.

Ok so somehow I ended up on this mushy-gushy tangent when really I was talking about parenting. Anyway. So we had the whole sleep discussion and I felt a sense of relief that Molly is such a great sleeper and always has been. But of course the universe was listening and was like, “Ha, ha, not so fast!” Last night Molly woke up crying around 11pm (rare) and multiple attempts to get her back to sleep by both myself and Eric were unsuccessful (even more rare). After the third or fourth time of replacing her binky, rubbing her back, and making sure her lullabies were playing, Eric turned to me and said, “So what should we do?”

I knew no matter what we chose to do last night, it would be the right answer… for right then. So he got up and got her and brought her into our bed. We spent the next couple of hours not sleeping as she tossed and turned and head-butted and generally took up way more space than any small person should take up in a queen sized bed.

We don’t have the answers. We’ll probably never get it absolutely right. But we love that little girl (and also this little boy!) so damn much that it’s ok – we’re all going to survive this.

Now please enjoy the fact that I’m a creeper who takes photos of my sleeping family: 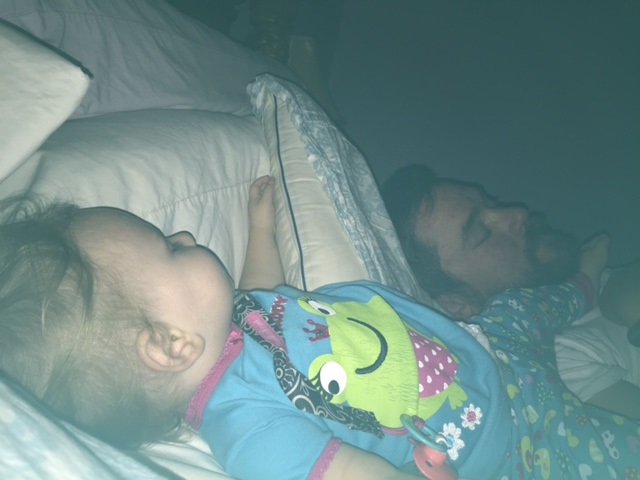 Not sure how I could love anything more