Blogs seem like a logical place to celebrate anniversaries, both happy and sad. Today I have a sad one.

April 8th, 2013 was hands down the worst day of my life so far (and hopefully forever, because if it gets much worse than that…ugh). That’s not to take away from the sadness of July 8th, 2013, which was also particularly awful. But the thing about April 8th was that it threw me off guard. In no way was I mentally prepared to hear the news that I heard. At first, it was impossible to believe. It really was like I floated up out of my body and was watching it happen to someone else. My twins were there, and they were alive. They were growing and their little hearts were beating. And then they just…weren’t.

I remember everything about that day. The annoying bus ride, the part where I saw them on the screen before I knew anything was wrong yet. The way my heart dropped into my stomach when the tech broke the news. The dread of calling Eric. The dread of telling everyone. The long bus ride back home.

It’s a tough spot to be in, because right now everything about this pregnancy is going well. So I’m happy/sad today. When I think of my twins, tears spring to my eyes in an instant. Perhaps now it’s easier to say things like, “I’ll see them again one day,” or “At least they never suffered; never felt pain of any kind.” It’s easier to say that all now because time has gone by, and because I’m looking forward to the imminent arrival of their sister. But that doesn’t mean I’ve forgotten about them. I wish I could have had them all. I wish they could know each other.

Today I’m thinking about and praying for anyone who has ever lost a child. Miscarriage, stillbirth, SIDs, everything. Truly, from the depths of my heart, I believe we will get to meet our lost little babies one day. Until then… 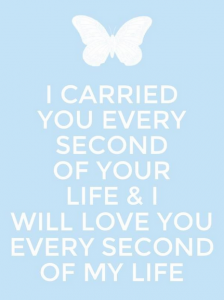