I have a lot of random thoughts, so I’m just gonna do bullet points. Lately my mind has been on a constant loop day and night and I literally have to carry around a handwritten list of “things to remember” so I don’t go insane. Physically, I feel like I’m 87 years old. Mentally, I’m more similar to a 20-something that just did a few lines and drank a pot of coffee. It’s an interesting combination.

-I’m very sick and miserable. It started out as a common cold (or maybe allergies??) with just a lot of congestion and subsequent congestion headaches, but now has become a hacking cough/super sore throat due to the post nasal drip (gross, I know). As if it wasn’t hard enough to get a few hours of sleep here and there. 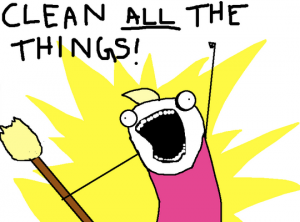 -That “burst of energy at the end” thing totally exists. I no longer have any desire for naps on the weekends, and would much prefer to rush around the house completing random, urgent tasks such as vacuuming the ceilings of every room (true story). I can see why women tend to go on maternity leave before the baby arrives – sitting at a desk working for 9 hours per day Monday through Friday seems like such a waste when there are ALL THE THINGS to do at home. Plus, it doesn’t really help that when I am at home tackling my endless to-do list, I have to keep stopping to take breaks because of the physical strain of gettin’ stuff done. I’ve also had a bunch of events these past few weekends (picnics, dance recitals, book club) that took up some time and energy. The good news is that this coming weekend my calendar is totally clear. I guess that means there will be lots of ceiling vacuuming in the near future.

-I’ve been banished from the bedroom. Well, sort of. Every night Eric gives me the option of couch or bed, but he now refuses to sleep next to me because I toss and turn and get up too many times in the middle of the night to pee (I think I’m up to like 5 or 6 times per night now. It’s preposterous). Anyway, it’s been keeping him up and making him cranky at work from being so tired, so alas we had to part ways. I’m actually more comfortable on the couch for some reason, plus there’s a TV out in the living room to keep me company. It’s kind of nice to have it on low volume in the background, which is weird for me, because I’m one of those people who HATES when TVs are just on and no one is watching them. Ugh! That’s partly why I established the bedroom as a TV-free zone, because in our apartment I used to hate when he fell asleep with it on all the time. But right now, at least, I find the background chatter soothing since I can’t really sleep anyway. The one downfall to this is that the infomercials have me convinced that I need SEVERAL items. Every morning I tell Eric what my latest obsession is (this morning it was the Dessert Bullet). Luckily for him and our bank account, I’m way too lazy/beached-whale-like to actually go get my credit card and order any of these things at 4am. But I do fall for it each and every time.

-The nursery is still not finished, but it’s MUCH, MUCH closer. My friend came over and helped me do stuff on Saturday (thanks, Ash!!), plus Eric brought the furniture down from the attic and set it all up. I’m not taking photos until it’s all the way finished – art on the walls, clothes folded, ready for action finished. But don’t worry. I think that day will get here soon. Dare I say… sooner than she gets here?

-I’ve been going to the perinatal center monthly for growth scans, which started to seem a bit unnecessary, but at least it was an excuse to get some of those awesome 4D ultrasound images. Anyway, Eric and I are total weirdos and like to joke that “maybe she’s not our kid” since it’s IVF and all and technically that could happen. Since the majority of the patients at New Hope are of Asian descent, I think it would be obvious fairly quickly. But I think about this pretty often – what WOULD we do if that really happened?

Anyway, I don’t think I have to worry about it because at her last growth scan, everything was measuring perfectly right on time except for one thing…her legs were measuring 3 weeks behind. So proportionally, her legs are short for her body. And this is the part where I mention that while I have a torso comparable to a friend who is 5’5, I am only 5’1 because of – you guessed it – my short legs. For some reason it was incredibly reassuring/adorable to hear that she’s just like me in this respect.

The next time I flip my calendar, I’ll have a baby. Damn.