I’d love to tell you that the bleeding stopped, but so far it hasn’t. It’s been on and off since the ultrasound on Tuesday eafternoon, and at this point I’m about ready to lose my damn mind.

I woke up last night at 3 a.m. and totally lost it. Sobbing, begging God to please let me keep this baby – the whole nine yards. I had just been woken up to the worst sore throat, so much nasal congestion I could barely breathe, no voice (from the sore throat) and you guessed it – more blood. I’m laughing at the thought of being freaked out over a teaspoon. I’ve basically had 6 periods in 2 days and I’m seriously wondering how there could be anything left in there.

On top of that – sore throat. Yeah. This is exactly what happened last time and what I’m assuming was the reason for my last miscarriage. My immune system is freaking out and I have no idea what I ate or drank that made it so mad. Yesterday I had no appetite at all so I literally just had strawberries, bread with butter and some leftover chicken and veggies. Water and seltzer to drink. So… it’s the berries? I don’t know. Part of my 3 a.m. pleas with God included promises to eat only the plainest, non-sugary foods in existence and drink water from here on out. I know I had joked about doing that before, but I was being so careful and not reacting to anything, so I thought all was well. Then I hit 6 weeks and it was like a light switch went on in my body. I have no idea what I’m reacting to. The good news is that I’m so stuffed up and miserable that I don’t even feel like eating. (And lest you think I have a sudden coincidental summer head cold, I will tell you that I woke up this morning to a clear throat and nasal passages, just with a bit of a croaky voice. I know with 100% certainty that the throat, the congestion and the head fogginess are bizarre reactions to mystery food allergies).

I spent a long time Googling subchorionic bleed and the possibility of them causing miscarriage is 1 – 3%. I read a lot of testimonials from women who bled and bled for weeks and went on to deliver healthy babies. Despite the fact that the ultrasound tech would not commit to this diagnosis, it’s the one that makes the most sense. The fact that I actually saw Weird Gray Mass with my own eyes is comforting, because I know that is the likely cause of this bleeding. To be bleeding this much without that ultrasound would be torturous. But still. No matter how much I’m reassured it could be normal, to see that much blood coming out is a major mindfuck.

This is going to sound awful but I need to say it anyway. I’ve been realizing today how much more attached I am to this baby than I was to the twins. See? I told you it was awful. I was wracking my brain to figure out why and came up with the following:

1) I was very naive while pregnant before. I truly did not believe anything could or would go wrong, so I didn’t feel like I had to bond with them so early. I thought I had all the time in the world.
2) This girl is a survivor. Out of two embryos, she’s the one who stuck. She’s tucked way up in the corner of my ute and I just picture her holding on for dear life (literally). Her little heart kept beating even as I bled. She’s super tough.
3) I feel some modicum of control over the outcome of this pregnancy since I have a good guess as to what went wrong last time. You know, despite the fact that so far I’m failing.
5) The psychic. If I don’t have that… I don’t have much at all. I know it sounds so ridiculous but that prediction has kept me more sane than anything else over these past couple of days. I keep telling myself that I’m going to have this beautiful girl in February. I have to believe that.

This post is all doom and gloom, so here’s a funny story. You’ll recall that there were no maxi pads in the house but since my body has decided to bleed ALL THE BLOOD, I needed something. Despite the fact that the doctor did not request it, I put myself on bed rest and was confined to the couch. That’s why my dear husband, who has never been given this errand before, got sent out to procure maxi pads. He was freaked out but all in all was a good sport about the whole thing. He insisted that he had to buy a Gatorade, too because he couldn’t just buy maxi pads. I asked if the cashier was male or female and he said, “Male, thank God.” I find that funny – if I were a cashier and saw a man buying feminine hygiene products, I would feel a swell of pride and compassion for him. I would think, Wow, what a good guy she has. But to each his own, I guess.

He also picked up dinner from our favorite little grill down the street and I ordered my favorite thing on the menu. But when I ate it, it tasted gross. I’m happy. That means my pregnancy hormones are still kicking in high gear. This morning I was eating my food allergy approved breakfast of fried eggs, a plain baked potato and water when I suddenly felt that pang and thought, I’m going to throw up now. I ran to the bathroom, retched a few times, then came back and finished my breakfast like it was nothing. I have to say, I didn’t throw up at all last time and this little episode made me feel really good.

I called the doctor today, but of course their office is closed for the 4th of July holiday. I didn’t want to call the emergency hotline; I don’t really think it’s an emergency. There is no surgical way to correct this problem. The recommended remedies are bed rest (doing it), blood thinners (taking them) and trying to stay calm and relax (attempting it). As the dishes and laundry and dog hair piles up around me, I’m just doing my best not to move around or think too much.

I’m going to call my OB/GYN tomorrow morning and see if they want me to come in again. Maybe someone else can look at Weird Gray Mass and tell me more definitively what it is. I know you’re all probably reading this whole thing thinking, Damn, this doesn’t sound good at all, she’s probably losing the baby. But I just keep thinking how big that mass was and how much blood it may have contained. I keep thinking about that heartbeat that I saw. I keep thinking about all those stories I read about pregnant women bleeding for weeks and going on to have healthy babies. I keep thinking I’m supposed to have a baby girl in February.

Despite my attempted optimism, I would appreciate all the prayers and good thoughts you have. I’m very nervous. Thank you all for your comments on my last post. I’m very sorry that I don’t have better news to report today. Here is what Baby Toast looked like on Tuesday: 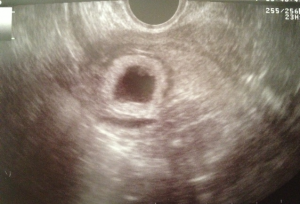