This is a sad post. All other burnt toast sympathizers should abandon it now.

Still with me? I warned you. Ok, here goes.

In our attempt to create what can only be classified as the Harding Family Farm, we adopted 8 chicks. In fact, I’ve been meaning to write about them for quite some time, but then they got really ugly. When we first got them they looked like this: 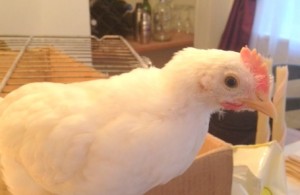 We had toyed around with the idea of getting chickens for two reasons. First, the notion of having fresh eggs was appealing. Second, it sounded cool. Now, Eric was definitely the instigator behind this whole plan. If I’m being completely honest it was one of those ideas that I hoped would go away and never come back. It’s not that I didn’t want chickens – it’s just that I assumed (correctly) that they would be more of a hassle than we were bargaining for and we were probably romanticizing the notion of owning them.

Then my uncle sent an email saying that his children had embarked on a 4H project hatching chicks from eggs. At the end of it they planned to donate the chicks to a farm. Unfortunately or fortunately for me, they wound up coming home with us this past Easter Sunday.

Obviously we didn’t know the genders, though we crossed our fingers for 7 girls and 1 boy. Sadly, the odds were against us. As the weeks passed it became clear that we had 4 girls and 4 boys. Not the worst outcome, but not what we were hoping for either. And unlike China, the boys are next to impossible to get rid of.

No one wants male chickens. All you need is one. If you keep more than one, they will fight to the death (so I’ve been told). So what do you do with them? I can’t figure it out. I called a family friend with a farm who sounded delighted that I wanted to give away chickens until I mentioned the gender. “Well, I don’t want males. I need layers,” he explained. So what the hell do people do with the men?!

There are different types of chickens and the kind we have are meant for egg-laying, not for eating. Apparently they aren’t tasty and tender. So now I’m stuck with 3 male chickens who no one wants and who will fight each other into a bloodbath of rooster carnage in a few short months. I’m really at a loss here. Plus, I feel so terrible for them that I can’t even go into the dining room where their cardboard box resides. It’s totally out of sight and partially out of mind on this one.

So my question is this – does anyone want 3 awkward-looking and not delicious male chickens? Free delivery.