The girl who doesn’t like dogs seems to have adopted another dog. And if she would have stayed at the SPCA one second longer, she probably would have come home with 5 more. That place is burnt toast central.

Bird came into our lives in a roundabout way. My dear friend Emily sent the below picture with no descriptive text. 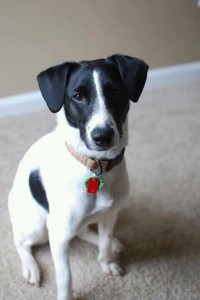 Side note: this is the same Emily who sent a photo of another very adorable pup a few weeks ago who was gone before I could answer. So I didn’t want to get my hopes up.

We went to meet Bird last Sunday and fell. in. love. For some reason when I said “Jack Russell terrier” to anyone, they became alarmed. “Those dogs are crazy” was all I kept hearing. Well, he is crazy, I’ll admit that. But he’s crazy just like Ryder, so he fits in well around here.

Sunday and Monday were a blur of anticipation and nerves. Apparently, Bird had sparked quite a few inquiries and we weren’t the only family interested. It was such a different experience than getting Ryder, where we just said “Yes, we want the dog.” Five minutes later, we had a dog. Easy.

For some reason the SPCA was obsessed with us having a fenced in yard. It was just really strange that they were so picky over unwanted animals – the whole application process surprised me. I figured we were doing them a huge favor by taking the dog off their hands, but then I suppose it makes sense to screen potential owners. These animals deserve the very best homes. Anyway, Bird was being fostered at Leader of the Pack in Kuhnsville. The owner there, Lisa, is amazing, and long story short she recommended us over another family even though she knew the other family personally. She was very impressed with the way Ryder and Bird played together when they met.

This may sound strange, but I could tell these two crazies were meant to be brothers. They just have the same… face. Maybe it’s the look in their eyes. While the transition has been a little bumpy (not for Bird, mostly for a jealous attention-seeking Ryder), they are already having a blast hanging out together. At this very moment, Ryder is sharing his favorite bone with Bird. OK, so Bird stole it. Whatever. They’re cute. 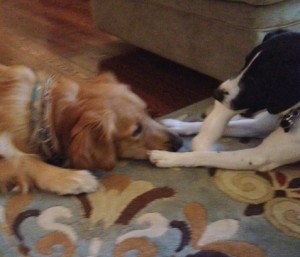